Intellectual property remains the lifeblood of a research-based pharmaceutical firm. The IP offers legal protection from competition, thus ensuring years of monopoly-like profit margins. Shares of Gilead Sciences (NASDAQ:GILD) came under pressure earlier this year over a dispute involving their patent estate covering Sofosbuvir. Sofosbuvir serves as the chemical backbone powering GILD's incredibly lucrative HCV franchise. The challenge this time is from Merck (NYSE:MRK), with their claim of infringement on prior work. But a new twist has developed that may potentially open the door for an additional reduction in the prior $200 million judgment.

The credibility of the witness remains a critical component when attempting to make your case. Naturally, when offering testimony, one is required to tell the whole story and not distort the facts to fit their view of events. Bloomberg reported after the bell on Friday that Phil Durette, one of the scientists working for MRK, claims the Sofosbuvir patent was derived from his own prior work. Yet the evidence is now pointing to Durette having gained knowledge of the compound while attending a conference call detailing Pharmasset's work. His employer at the time, MRK, was in the process of deciding whether or not to purchase Pharmasset.

I find the Bloomberg report fascinating. The Pharmasset patent that led to Sofosbuvir was known to all the major players in the field. The larger players, such as MRK, Pfizer (NYSE:PFE) AbbVie (NYSE:ABBV) and Sanofi (NYSE:SNY), have significant financial resources to take out Pharmasset. MRK already had an important asset in HCV with Victrellis; undoubtedly, furthering their market share would hold great appeal. To MRK's credit, they were doing their due diligence - yet, somewhere along the chain of command, progress ground to a halt. I give great credit to the management team at GILD for their willingness to bet the company on Sofosbuvir. The $11 billion price tag for Pharmasset remains a significant commitment for a company with a then-market cap of $37 billion. A miss would cripple GILD for years to come. MRK's market cap then was over $90 billion; clearly a miss would not have the same impact.

The courtroom battle will continue on Monday, as both sides will appear before U.S. District Judge Beth Labson Freeman to file additional arguments over the testimony of Durette. I appreciate the moves orchestrated by GILD's legal team. By pointing out factual inconsistencies in the testimony of Durette, they may be able to generate additional doubt over the validity of MRK's claims. Thus far, GILD's management has set aside $200 million to cover the reduced verdict. The goal here is to have the judgment reduced further or, ideally, to have the entire case dismissed.

A victory in the MRK patent dispute would resolve the legal overhang concerning Sofosbuvir. In my view, the MRK case is much stronger than the attempt made by ABBV. The next major event for the HCV franchise is the upcoming PDUFA date for Sofosbuvir/Velpatasvir, GILD's next generation pan-genomic treatment for HCV. Notice the pivotal role Sofosbuvir plays with Harvoni (Ledipasvir/Sofosbuvir), GILD's second compound in HCV. The newest product removes Ledipasvir and replaces it with Velpatasvir, thus creating a new molecule. The HCV marketplace is evolving in a similar manner to the HIV market, an area that GILD continues to dominate. If GILD is successful in reducing this case's judgment or having it dismissed, it would remove some of the overhang affecting the share price. 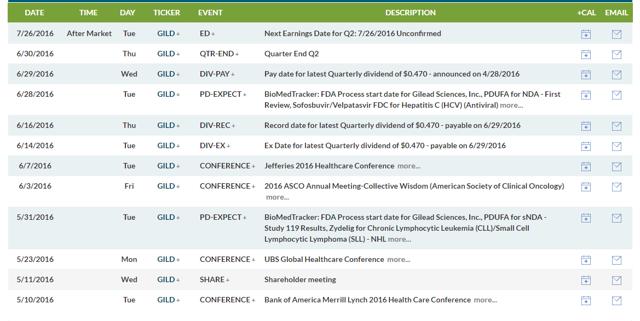 I will be watching for additional information as the case unfolds and will post updates accordingly. A new article discussing my take on GILD's recent earnings, along with an updated fair value model, will be forthcoming shortly. I would like to thank you for reading and look forward to your comments.