The Q3 earnings season kicked off with a bang last week as banks were firing on all cylinders. All six major banks (JPM, MS, BAC, C, WFC, GS) beat expectations on the top and the bottom-line, driven by continued reserve releases, record asset management fees, improving loan growth, robust M&A/IPO activity and increased equity trading revenues. Beyond that, bank CEOs had rosy outlooks for Q4 and beyond, both for their institutions as well as the US economy.

It wasn’t just the banks though, other names such as United Health (UNH), Delta Airlines (DAL), Taiwan Semiconductor Manufacturing (TSM) and Walgreens (WAB) blew past analyst estimates. Of the ~80 companies from the S&P 500 that have reported, 80% have surpassed EPS expectations and 83% have surpassed revenue expectations. This has pushed the growth rate even higher, with EPS growth at 30% and revenue growth reaching 15.1%, according to FactSet. This is not only the third highest EPS growth rate since 2010, but also the third consecutive quarter of 30%+ profit growth.

It’s safe to say, even with the earnings season just getting underway, that Q3 will not be a flop. Last week we mentioned four data points we look at to determine how an earnings season is going to play out, and for Q3 each of them were sending a bullish signal:

Even Q4 expectations are still looking strong, and even growing. Currently S&P 500 EPS growth is expected to come in at 22.1%, with revenue growth of 11.6%.

While US companies seem to be weathering many of the headwinds, they are still talking about them on Q3 earnings calls. Thus far about ⅔ of S&P 500 companies that have reported have mentioned the negative impact that supply chain disruptions have had on their businesses, and just as many have mentioned inflationary pressures. This doesn’t yet seem to be bothering market participants who have instead led markets higher, focusing more on the good news seen in reports and the belief that the consumer will continue to do their part to push the economy forward.

Where this could fall apart is in the beginning of the New Year, a time when consumers traditionally take a breather from spending and could be feeling the squeeze of higher costs for everything from filling their gas tanks to heating their homes and beyond.

Note: What is one positive impact companies are reporting on? Foreign exchange. Many companies including Costco, Nike and Conagra have mentioned the tailwind caused by the favorable impact of currency rates, but often it’s not enough to offset higher input costs.

Energy - No growth rate could be calculated due to negative growth in the year ago quarter, but on a YoY basis EPS growth in this sector has climbed the most of any due to higher energy costs. Year-to-date Natural Gas is up 100%+, Crude WTI is up 70% and Brent Crude is up 63%.

Materials - The EPS blended growth stands at 90.5%, making it the second highest growing sector for Q3 2021, driven by increased demand for building materials such as steel and lumber.

Industrials - Blended growth for this sector stands at 60.6%. Despite some major headwinds for certain subsectors (airlines for example), demand for machinery and equipment, as well as new airplanes continues to support this sector.

Consumer Discretionary - EPS growth for CD currently stands at 3.1%. This has increased as companies from this sector have started to report. Keep in mind the names that are driving the sector downward include Wynn and Las Vegas Sands, casino operators impacted by the crackdown in Macau. Yet, Consumer Discretionary is the sector posting the second-largest positive difference between actual and estimated earnings, meaning not only are they beating analysts estimates, but by a large amount. Expect this trend to continue, especially as names like Amazon (AMZN) have seen estimates pulled down way too low, and will likely beat on strong back to school shopping season and pricing power.

Consumer Staples - EPS growth for CS is expected to come in at 1.6% for Q3 on account of higher input costs for corn and wheat due to a poor crop season disturbed by extreme weather and drought, further exacerbated by supply chain delays.

Utilities -  Finally, we have our only sector expecting lower YoY growth, Utilities. Profits are expected to decline 0.1% on account of higher energy costs of electric utilities -- which these companies end up absorbing for consumers with fixed pricing schemes.

Earnings to Watch this Week

Peak earnings season does not begin until next week, but this week will be a good warm up. We’ll be tuning into names like Netflix, Tesla, United Continental Airlines, IBM, Intel and Chipotle. 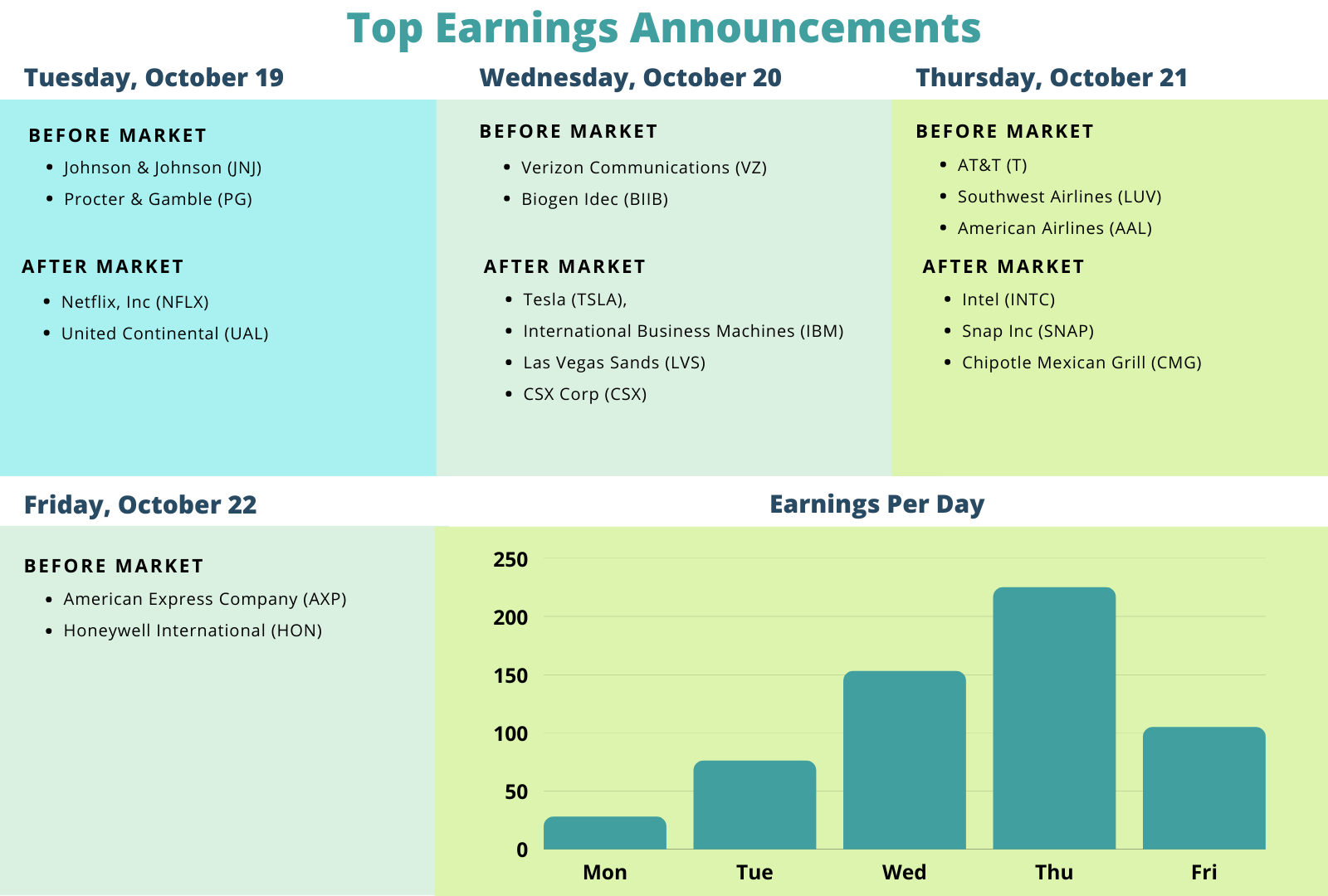 This season peak weeks will fall between October 25 - November 12, with November 3 predicted to be the most active day with 1,077 companies anticipated to report. 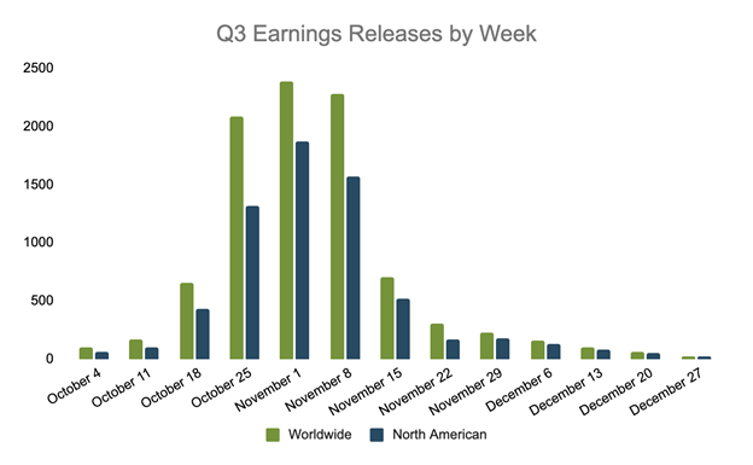 Next week peak earnings season officially begins with 2,089 companies from our universe of 9,300 reporting.