As we head into the final peak week of the season, earnings results for Q2 2021 continue to impress. According to FactSet, 87% of the 450 S&P 500 companies that have reported have surpassed EPS expectations, and 87% have beaten revenue estimates, by margins of 17% and 5%, respectively. There are a couple of caveats, however. It’s important to keep in mind the easier year-over-year comparison. From April through June of last year the US was in COVID-19 lockdown. Also remember that Wall Street analysts tend to be very conservative with their estimates, mostly just following corporate guidance. The overwhelming agreement is that they were even further off the mark than usual this quarter; they were just plain wrong.

All of these better-than-expected results have pushed the S&P 500 profit growth rate for Q2 to 88.8%, the highest recorded since 2008, when FactSet began collecting this metric. And with 50 names yet to report, you can bet that number will get pushed higher, especially as a parade of retail earnings start coming in the week of August 16.

We’ve already gotten a peek into retailers in the last couple of weeks. Under Armour, Ralph Lauren, and Wayfair reported last week, all easily beating estimates on the top and bottom-line. Retailers stand to benefit from high employment in the US. Just last week initial claims continued to fall, and continuing claims fell to their lowest level since March 2020, a pandemic era low. When consumers feel secure in their employment they spend, putting that money back into the economy. Many of these retailers also took time during the pandemic to invest in their businesses and implement turnaround plans and that seems to be paying off for Under Armour and Ralph Lauren.

We’ll also be keeping a close eye on second-hand and consignment platforms that report this week: The Real Real, Poshmark and ThredUp. All have surged in popularity as sustainability becomes more of a focus as younger consumers remain cost and value conscious. 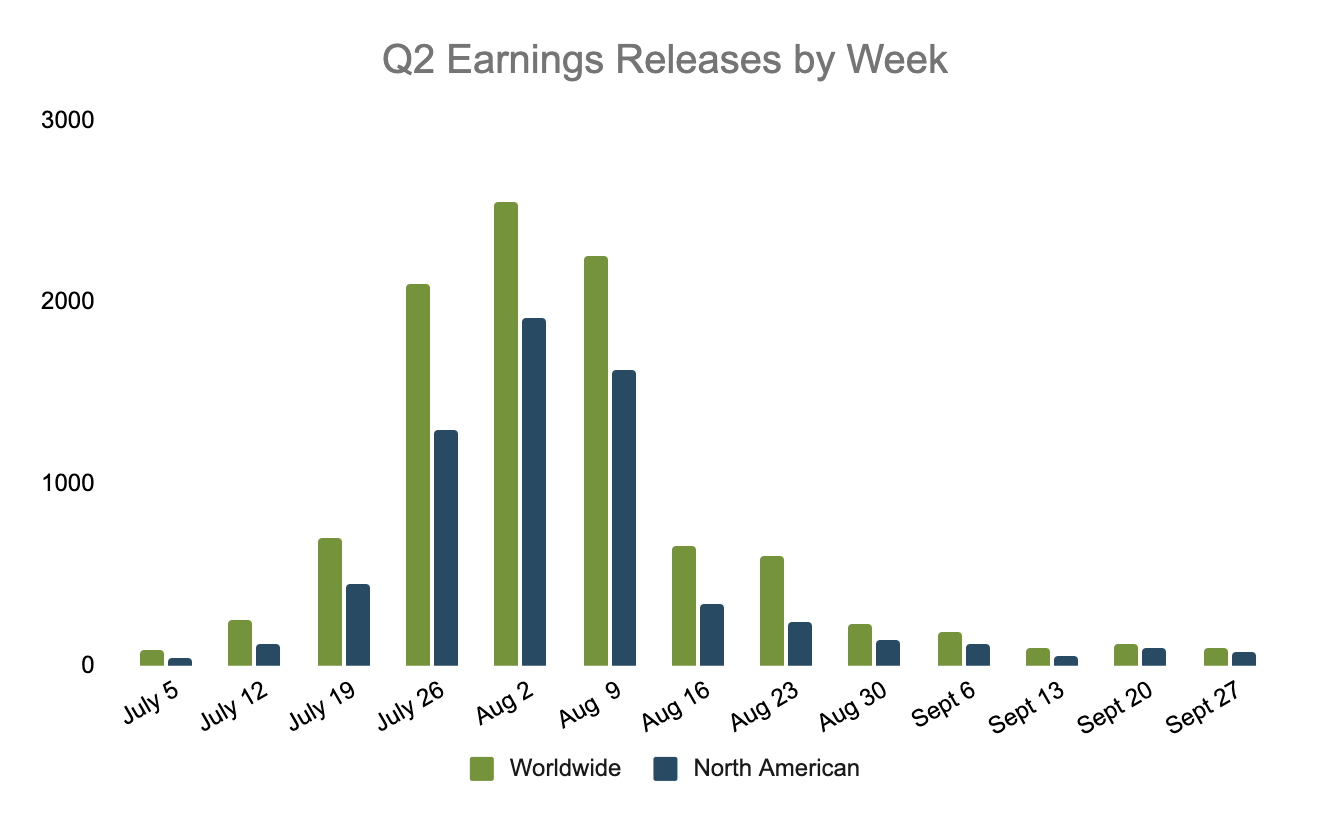 This week you’ll see we have a good mix of names reporting, a few of what we might call pandemic beneficiaries: Nautilus, Sonos, Ethan Allen, Casper, as well as big names like Disney out on Thursday. 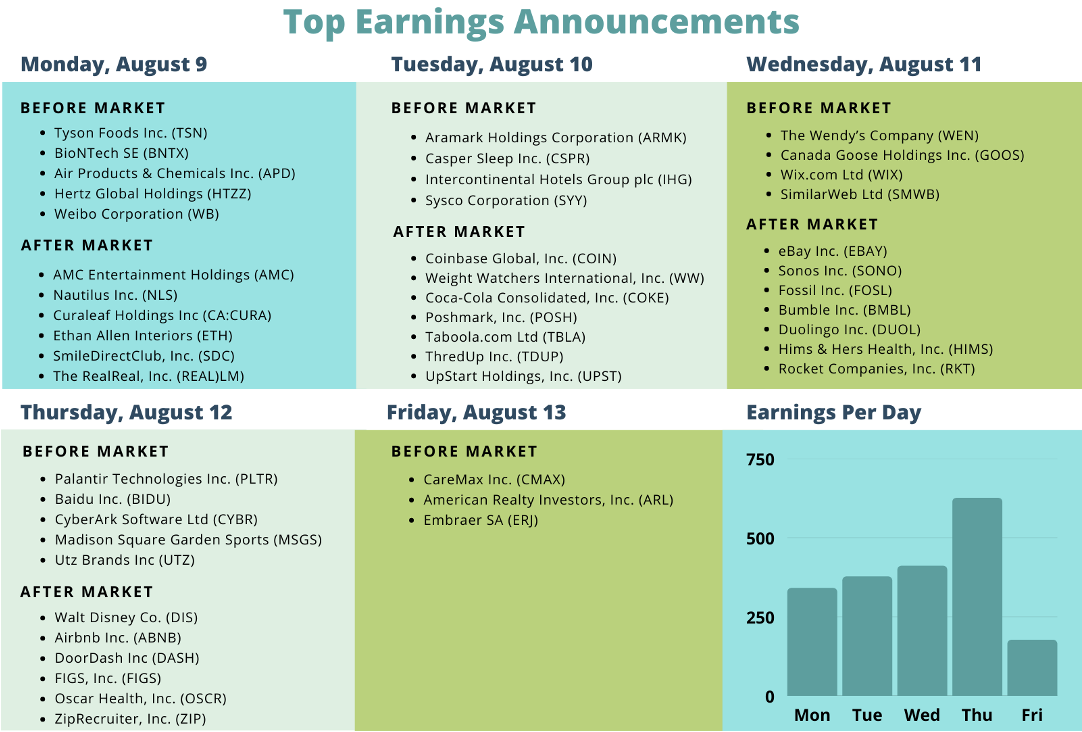 We’ve got two outliers on our radar this week, both S&P 500 companies pushed their earnings out and recently appointed new CFOs (which could explain their unusual earnings dates).

First up is a stalwart in the Consumer Discretionary sector. eBay (EBAY) is a $49 billion market cap commerce firm headquartered in California with other businesses in Asia. The Nasdaq 100 and S&P 500 stock has a P/E ratio under 20x, rare for a big-name tech-related company in 2021, so perhaps current expectations are not so high. The company faces intense competition from Amazon, Walmart, and Target. Nevertheless, its stock price has been on a stellar run, climbing from under $50 late last year to above $70 recently.

Earlier this year, eBay announced it would divest one of its businesses in South Korea in a move to shore up cash. Then in May, the company issued a press release that it would bring on a new CFO. Scott Priest, formerly CFO of Jetblue, officially took his new post on June 21. Finally in July, eBay signed an agreement for the partial sale of Adevinta to Permira, reducing its Adevinta stake to 44%. So there’s already interesting corporate activity going on ahead of this week’s earnings release.

eBay has a history of reporting Q2 results between July 20 and 28 with a strong Wednesday trend. On April 29, Wall Street Horizon set a July 27 Unconfirmed earnings date based on the trend. On July 13, however, eBay announced via its website that it will be reporting on August 11 before market, which is significantly later than normal. The resulting Z-score is 4.64. With a high volume of corporate events in the last few months and a much later than usual earnings date, traders should pay close attention to the potential for more unexpected news during eBay’s earnings release next Wednesday.

Air Products & Chemicals a materials company that sells gases and chemicals for industrial uses, like eBay they are also in the S&P 500, with a market cap of $64B. After plummeting nearly 30% in the early days of the pandemic, APD has come back stronger, hitting over $300/share back in June before settling just below that level for the last two months.

Air Products & Chemicals is getting ready to welcome a new CFO. Current CFO Scott Crocco will run Monday’s earnings call, but it will be his last day at the helm as he retires. On August 10th newly appointed Melissa Schaeffer will take over.

Air Products & Chemicals historically has reported their fiscal Q3 results between July 22 - August 1, typically on a Thursday. As such, we set a report date of Thursday, July 29. The company later confirmed an earnings date of August 9 BMO with the conference call at 8:30AM eastern time. This change resulted in a high Z-score of 3.81. A high positive Z-score (we consider anything higher than 3 or lower than -3 to be significant) reflects a later than usual confirmed earnings date, which in this case could signal that APD is getting ready to surprise to the downside.

Next week's earnings season starts to wind down with only 655 companies from our universe of 9,000+ expected to report, mostly in the retail space.