August closes out a blockbuster month for IPOs, but SPACs continue to dwindle

US IPO activity remained hot even in the dog days of summer, but few of those companies chose to go public through special purpose acquisition companies (SPACs). After last year’s initial “SPAC attack,” which continued into the early part of 2021, SPAC deals started to show a gradual decline as the year has progressed. In fact, in a recent Edelman survey, 9 out of 10 institutional investors said they expect the IPO and SPAC surge to end within the next year.¹ A somewhat contradictory finding within that same report is that 88% of those investors said they are “likely” and 38% “very likely” to invest in an IPO, SPAC or newly public company in the next year, suggesting there is still plenty of interest in new issues.

After having a slow Q2 and start to Q3, IPOs picked up in a big way in August. Of the 99 IPOs debuting last month, 14 were brought to market through SPACs and 85 went the traditional route.² This is particularly surprising as August tends to be a quiet month for IPOs. Most firms try to avoid filing for IPOs during the summer holiday periods, as well as the Christmas/New Year holidays, making Q1 and Q3 less popular times to go public.

While the 14 SPAC IPOs is the highest level seen in 5 months, it’s still low compared to what we saw last year. As a percentage of total IPOs, the number of SPAC IPOs has declined as well, after accounting for the majority of IPOs during some months of 2020. In June, only 27% of IPOs debuted via SPACs, in July that number was 35%, falling to 16% in August. 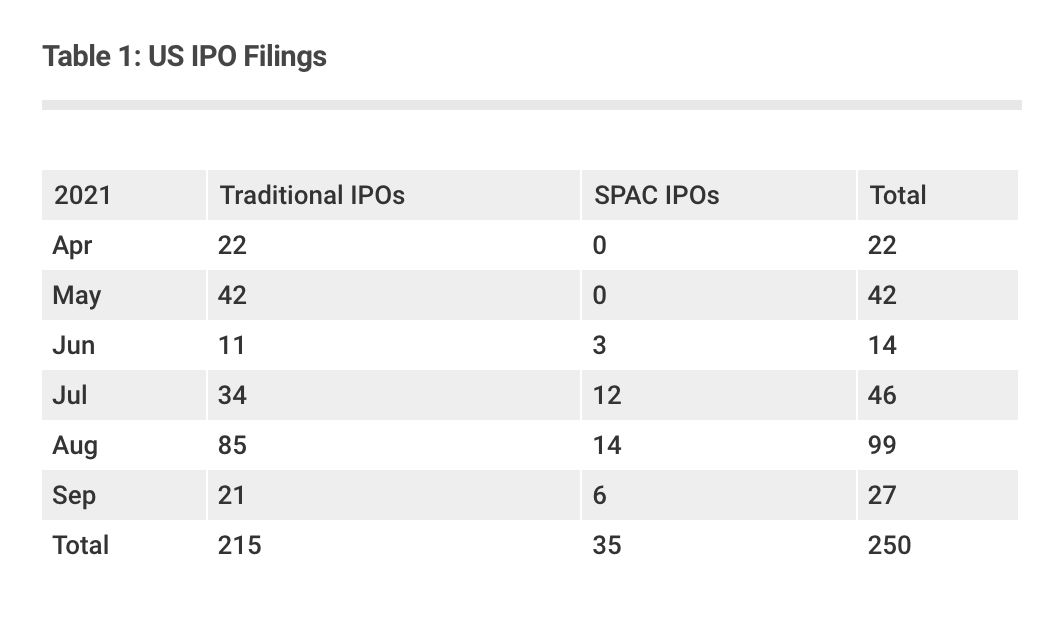 Has the SPAC Bubble Burst?

The data would seem to suggest that the SPAC frenzy is at least taking a breather for now. Heading into 2022 the question is whether reputation or regulation will catch up to SPACs first. Despite their popularity in the last year, a study from the Financial Times found that the majority of SPACs organized from 2015 - 2019 were below $10/share, and that “only half are shown to be value creating.”³ And while SPACs are not regulated as much as traditional IPOs, the threats of further regulation aren’t going away anytime soon.

Last month SPAC IPO filings seemed to lump up in 3 main sectors, Consumer Discretionary, Technology and Financials (see sector analysis below). This creates a ton of competition, with investment dollars chasing deals in the same few industries. If this continues, the quality and readiness of the companies being brought to market may deteriorate, and may never result in a meaningful return on investment.

As for Technology, the names going public included Matterport Inc, Learning Technologies Group and ironSource Ltd. The interest from SPACs in the tech sector is pretty straightforward. There are more private companies in the tech space looking for capital compared to other industries, making them an easy target. Tech companies also tend to benefit from the SPAC arrangement as they look to fund innovation and R&D efforts.

Honorable mention goes to the Health Care sector which was hot on the SPAC radar in 2020 and continues to be. In August both POINT Biopharma Global Inc. and Ensysce Biosciences Inc went public. In the wake of the COVID-19 pandemic, the Health Care sector has been subjected to significant disruption. As such, investors have turned to SPACs in hopes that they can offset volatility in the space, as well as surface innovative new companies that are addressing some of the shortfalls in the industry as highlighted by the pandemic. 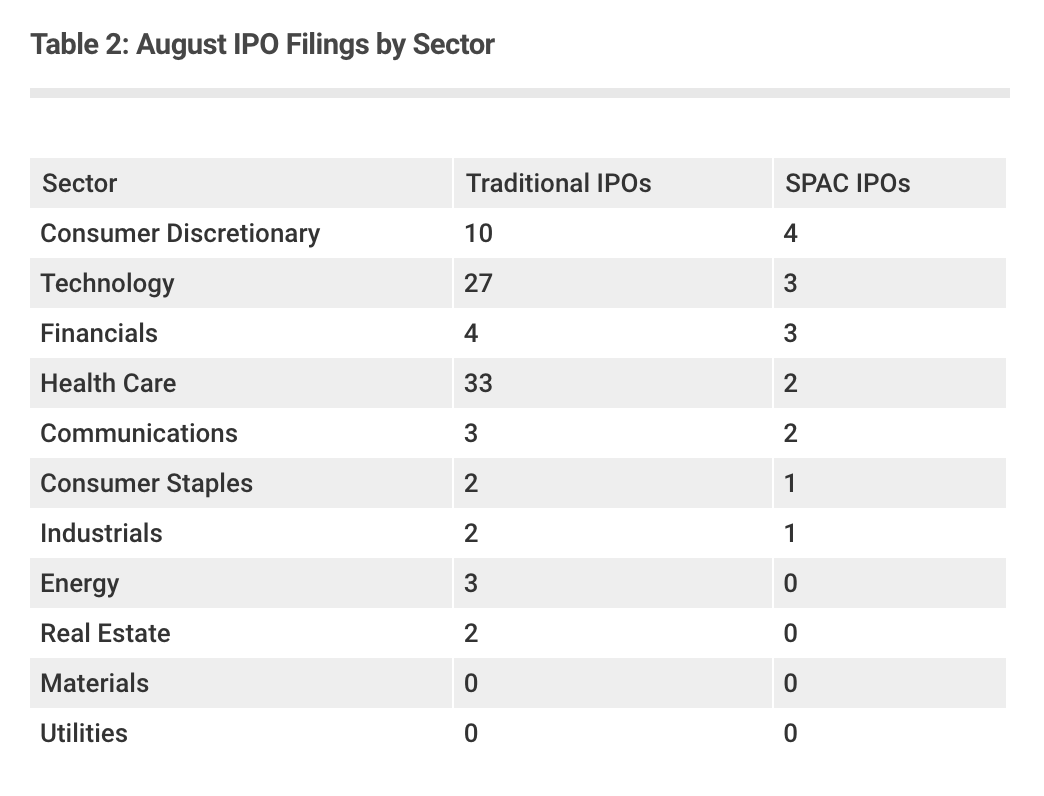 Q4 Activity and Beyond

So far in September 27 IPOs have debuted, 6 of those being SPAC IPOs. September, October and November tend to be strong for IPO activity before taking a quick pause around the holiday season. Despite declining SPAC filings, the numbers remain well ahead of what they were just over a year ago, and there are still hundreds of SPACs looking for merger targets. Therefore, we could still see increased activity in the months to come.

¹ https://www.prnewswire.com/news-releases/edelman-special-report-finds-investor-appetite-for-new-issuers-is-strong-but-predicts-surge-in-ipo--spac-activity-will-moderate-in-the-next-year-301317093.html
² Wall Street Horizon data - based on when IPOs were activated (not priced).
³ https://www.ft.com/content/6eb655a2-21f5-4313-b287-964a63dd88b3