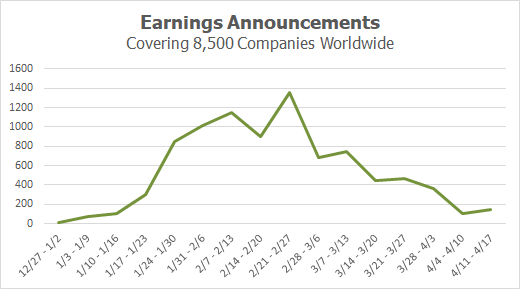 A New Beginning, the Same Pandemic

2020 is in our rearview mirror, but challenges remain. Vaccine rollouts are progressing slower than some hoped, and a new strain of the virus brings about worries that a return to normalcy might once again be delayed. Not surprisingly, we have seen that narrative play out in the equity markets over the last few weeks as some of the biggest winners have been within the ‘stay at home’ trade. ETFs specializing in online retail and mega-cap tech had a strong finish to the year.

FactSet notes that 2020 earnings growth for the S&P 500 was projected at -9.7% as of mid-December, but a sharp rebound of +22% is expected for 2021. A fresh round of economic stimulus will bolster Q1 GDP figures, assuaging fears of a double-dip recession. Europe was hit harder last year as a result of sharp economic and social restrictions across the EU. GDP growth is expected to be about 4% in Europe in 2021 while a jump of nearly 5% is expected for the US, according to Bank of America Global Research.

What to do with the Cash

More near-term, earnings season begins in just a few weeks. Companies in the Financials sector are among the first to kick things off, and the market will pay close attention to how banks are navigating the low interest rate environment. JP Morgan (JPM) recently announced a resumption of its stock repurchase program which was met with optimism from Wall Street. There is ample cash on the balance sheets of corporations around the world - analysts and pundits will be curious to hear plans from executives on what will be done with that liquidity. According to Wall Street Horizon data, the bulk of the reporting season runs from January 17 to February 27.​​​​

Peugeot and Fiat Chrysler (PUGOY, FCAU) host an Extraordinary General Meeting (EGM) today. The two major European automakers announced plans to merge last year, and the EU approved the $38 billion merger just two weeks ago. “Stellantis”, as the two will be known, will be the 4th biggest car company in the world following final shareholder approval. Today’s EGM between the two firms should give the final go-ahead for the combination. Investors should pay attention to any shareholder concerns regarding risks to the deal given a bleak current backdrop in Europe. New car sales were down sharply in the US last year as well as manufacturing constraints due to COVID-19 hampered production and sales. Not surprisingly, used car prices surged in 2020. Traditional automakers will be an interesting play as economies move toward fully re-opening. Pent-up consumer demand likely bodes well for the new car market.

Micron (MU) issued preliminary earnings guidance on December 1, and the firm is scheduled to report quarterly results on 1/7 after market. The $80 billion market cap semiconductor performed well last year, but fell short of many of its peers with a return just shy of 35%. The VanEck Vectors Semiconductor ETF was more than 50% for 2020. Back on December 1, the company raised its earnings per share guidance for first quarter results (for the period ending November 30). Asia is a key supplier for semiconductor firms within the Information Technology sector. Traders will want to monitor this report for clues on how the upcoming earnings season may verify, particularly for other big names within the global IT sector, a major contributor to the market’s earnings growth.

Staying on top of a Fast-Paced Market

The first quarter of 2021 will be action-packed. Corporate executives continue to pivot around the latest COVID-19 developments. The work-from-home trend looks to persist through much of the first half of the year while virtual and hybrid learning continues this semester. Economies are on edge with consumers still hesitant to hit the town – will a successful vaccine distribution quickly change consumer behaviors? What stay-at-home trends will stick? The upcoming quarter of investor conferences, earnings reports, and preliminary earnings guidance will all shed light on what to expect in the new year. Traders and portfolio managers must be in-the-know as to when key corporate events are slated. As we have seen in the last several weeks, the market reacts quickly and sharply when corporate news breaks.