The losers have become the winners in the last two months. The investment themes from the first half of the pandemic waned during Q3 and Q4 while new leadership has emerged. Exposure to small and micro caps, along with the left-for-dead energy sector, have rewarded investors who braved the awful sentiment late last year. Since early November, large cap growth stocks are up 5% while small cap value equities (and the energy sector) surged more than 30%. The often-overlooked microcap niche, comprised heavily of Financials, is up a whopping 50%

A Dose of the 'Re-Open' Trade

So what caused this massive narrative flip among traders? It’s all about expectations. The COVID-19 situation is dismal across the USA and areas of Europe while cases are also suddenly ticking higher in Japan. Daily deaths continue to trend higher – now near 15,000 per day around the globe.

The good news is that positive vaccine developments continue to cross the wires. Just last week Johnson & Johnson’s one-shot vaccine was said to be safe and produced a strong immune response in early trials. While the rollout of the vaccine has been slower than hoped, help appears on the way with more versions of a vaccine on the horizon.

So the market is looking ahead several months to when herd immunity kicks in via vaccinations. The ‘re-open’ trade is the new theme. That narrative was bolstered by additional stimulus from the US Congress in late 2020 while President-Elect Biden has hinted at another big stimulus injection including more direct payments to many Americans.

Earnings Season is Off to the Races

Financials jump-start Q4 reporting season. Wall Street Horizon’s data shows that 148 companies in the Financials sector are set to report this week while 262 are slated for next week. The week of January 31 features a mixed bag, but the key sectors to watch will be Consumer Discretionary, Materials, and Industrials. The peak of earnings season globally runs from January 24 through February 27. 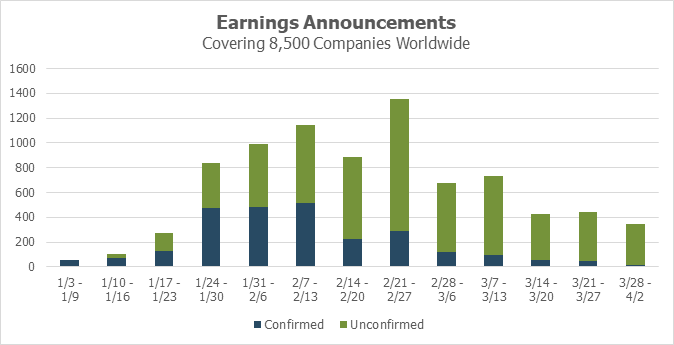 Increasing inflation expectations and a steepening yield curve could have positive profitability impacts on many of the big banks. What’s more, Goldman Sachs reported strong trading activity during 2020 while JP Morgan announced a massive stock repurchase plan last month. Financials is the second strongest sector performer since early November. The rally in the XLF ETF fits the new narrative of strength in value stocks over growth.

Atlantic Capital Bancshares (ACBI) was the first to cross our radar. Wall Street Horizon set an unconfirmed Q4 2020 earnings date of January 28 (after market) based on the stock’s reporting history. ACBI issued a press release on January 12 that the Q4 report would be released early on January 21 (after market). The result was a high Z-score of -5.53. The negative Z-score means ACBI is reporting much earlier than usual, so there is the possibility of market-moving news to be released along with the standard earnings report.

Another stock to watch is Eagle Bancorp (EGBN) which had an inferred earnings date of January 13 (after market) based on its reporting trends over the last several years. Eagle often reports on a Wednesday. The company issued a press release on January 13 stating that results would be released on January 27 (after market). The later than usual announcement resulted in a high Z-score of 3.96. Traders should flag this stock for potentially unusual details in the report later this month.

We wrap up this week’s report with an important earnings date reconfirmation from Logitech International (LOGI). The $18 billion Swiss Information Technology stock has been a winner since the March 2020 bottom, rallying more than 150%. LOGI was a winner in the 2020 ‘stay-at-home’ trade as consumers sought devices and games to make functioning from home easier and more enjoyable.

Wall Street Horizon caught unusual news from LOGI. Back in October, the company updated its website stating Q3 2021 results would be released on February 2 (after market). A subsequent press release on January 4 moved up the earnings date to January 18 (after market). The significant revision resulted in a Z-score of -0.49. Traders should monitor this international large cap for important results this week.

There is no shortage of key corporate events as the new year begins. Virtual meetings and investor days have become the norm, but positive vaccine developments bring hope that conferences will return to in-person later this year. Wall Street Horizon tracks all of these critical events for traders & portfolio managers. Investors must look beyond standard economic data to find company-specific headlines from corporate events that move stocks.