Walt Disney Co. is out with Q1 results after the bell today, and we’re tracking an interesting pattern of events forming. Typically when a company hosts, sponsors and/or attends several corporate events in a short period of time, it’s worth paying attention to as it stokes volatility.

While a standalone event such as a company’s upcoming movie release date may affect volatility, investigating multiple events closely in relationship to one another can have a stronger impact on a company’s corporate financial health. Observing the information pre-event, during the event and post-event and how they interact is critical to understand how events relate to trading and risk strategies.

The next two months look like this for Disney: 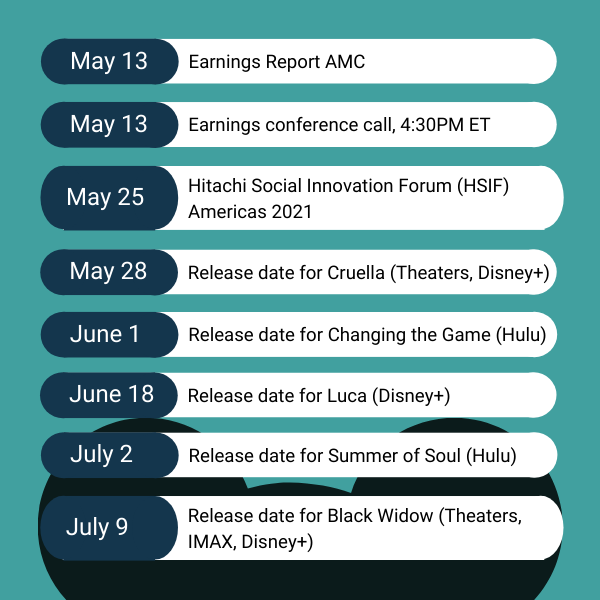 We’ve seen this before with Disney, two years ago we pointed out a Q2 event cluster that led to a record high for the stock at the time. Shares of DIS have improved greatly over the last year- and-a-half, after plummeting to a nearly 6-year low of $85.98 on March 20, 2020, the day many states locked down due to the COVID-19 pandemic. Since then the stock has been clawing its way back, one of the beneficiaries of reopenings around the US this spring and wider vaccination distribution. Shares have hovered in the $180s for the last two months.

A few events of note: On May 25 two executives from Disney are speaking at the Hitachi Social Innovation Forum, Rachel S. Hutter, SVP International Facilities and Operations Services, Worldwide Safety and Health, and Engineering and Jon Snoddy, SVP, Imagineering R&D, Show, Ride & Technology. This event is meant to highlight “how data-driven strategies are transforming industries, predicting the future, and safeguarding society and the environment”, and puts DIS in a good light with participation in multiple segments.

We’re also heading into a busy movie release season, with theaters being open for the first time in over a year. Major releases include Cruella, starring Emma Stone and the highly-anticipated Marvel Studios installment of Black Widow starring Scarlett Johansson which will also be out on IMAX.

On the streaming front, Pixar animated film Luca will follow in Soul’s footsteps by skipping theaters and streaming exclusively on Disney+, a move that has been criticized by some Pixar staff, but also likely has to do with the success Soul had on the platform.