In true earnings season fashion, as more companies report for the quarter, the S&P 500 profit growth rate has steadily climbed due to the number of companies surpassing expectations. Upbeat results have been able to do 2 things thus far: 1. Offset the downward revisions that analyst’s had been submitting for companies that have yet to report and 2. Have subsequently prompted the Sell Side to do a 180 and increase some previously lowered estimates. The S&P 500 YoY profit growth rate which dipped to 1.3% on October 14 is now up to 1.5% as of Friday, October 21. This is still only a quarter of the 6.3% growth seen in Q2, and the lowest growth rate since Q3 2020 ended with -5.7%. (Data from FactSet) It’s also important to note that estimates declined dramatically coming into the quarter, lowering the bar for many companies.

Furthermore, a number of companies are actually raising expectations for FY 2022. IBM said it expects to exceed its full-year revenue growth targets, and both Verizon and AT&T raised their FY EPS forecast.

Speaking of guidance, Netflix announced they will no longer be providing it for their paid subscriber numbers starting next quarter. Subscriber numbers have long been the most watched number when Netflix reports quarterly results, the company said they will now shift their focus to revenue numbers as their prime metric.

Leri Continues to Show That Things Aren’t That Bad Yet

Our proprietary Late Earnings Report Index is also signaling that corporations might be in a better place than originally thought… in the short-term anyhow.

Each quarter we calculate a “Pre-Peak” LERI on the day when major US banks report, the unofficial kick-off to the earnings season. Last quarter the Pre-Peak LERI was 101 and by the end of the reporting season the Post-Peak LERI was surging into concerning territory. This quarter logged a Pre-Peak LERI of 100, the historical average for Late-to-Early reporting outliers. Given the recent upward trend it would have been reasonable to expect a value well over 100, so this was the first indication that the Q3 earnings season might be stronger and more resilient than originally expected.

This week the LERI continued to fall to a reading of 85 as more companies are confirming earnings dates that are substantially earlier than their trend. This bodes well for the current season and is in-line with the movement we are seeing in other readings of earnings strength such as the S&P 500 EPS growth rate and the number of positive earnings surprises.

This week kicks off peak earnings season for the third quarter with a number of high-profile reports from Alphabet (GOOGL) and Microsoft (MSFT) on Tuesday, October 25, Meta (META) on Wednesday, October 26 and Apple (AAPL), Amazon (AMZN), Intel (INTC) and Twitter (TWTR) on Thursday, October 27. 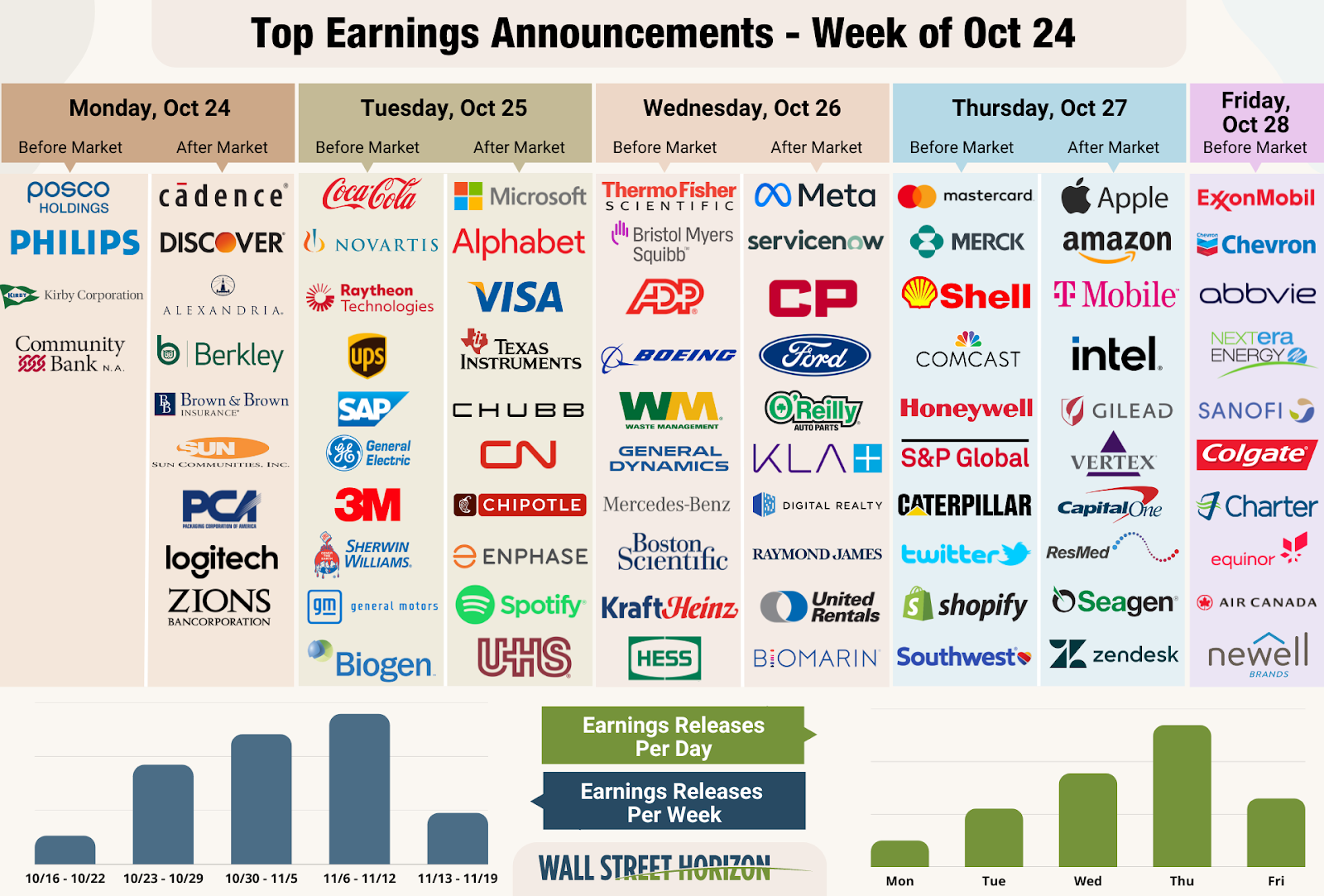 This week we get results from a number of large companies on major indexes that have pushed their Q3 earnings dates past their historical norms. Four companies within the S&P 500 confirmed outlier earnings dates for this week, three of which are later than usual and therefore have negative DateBreaks Factors*. Those three names are Halliburton Company (HAL), Synchrony Financial (SYF), and NVR Inc. (NVR). Pioneer Natural Resources (PXD) confirmed an earlier than usual date, as well as other notable names such as Wyndham Hotels and Resorts (WH).

Halliburton had a strong Monday trend up until last quarter when they moved Q3 reporting to Tuesday. They typically report during the third week of October, but have shifted to the fourth week this year, with October 25 being the latest they’ve reported Q3 numbers in our 10-year history. While this would normally signal bad news ahead for the company, it’s also important to note Halliburton just onboarded a new CFO in May of this year, the Tuesday report date and shift in week is likely due to that change in management. Otherwise, HAL’s peer oilfield service providers have been providing upbeat numbers this quarter, with both Slumberger (SLB) and Baker Hughes (BKR) reporting better-than-expected results, and commenting that the supply-chain issues of last year are behind us.

This season peak weeks will fall between October 24 - November 11, with November 3 predicted to be the most active day with 927 companies anticipated to report. Only 61% of companies have confirmed at this point (out of our universe of 10,000 global names), so this is subject to change. The remaining dates are estimated based on historical reporting data. 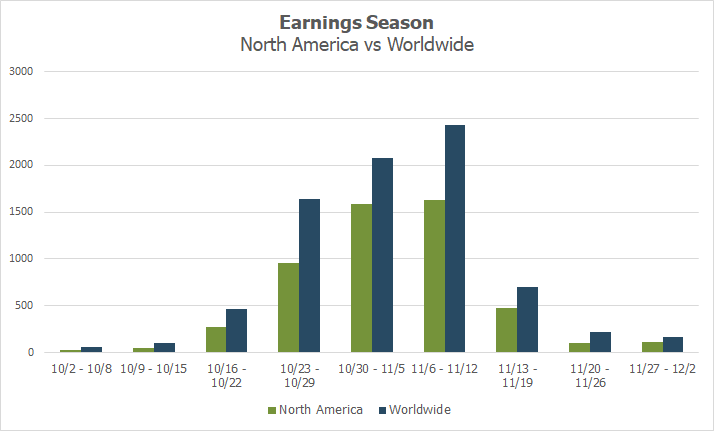