Meme stocks are back in the news as high short-interest names feature elevated volatility. One such stock crossed our radar and is highlighted this week.

Here We Go (to the Moon) Again?

The meme stocks are back in vogue. Shares of the usual suspects – Gamestop (GME), AMC Theaters (AMC), Express (EXPR), among others, - surged during the back half of last week for no apparent reason. These names had a meteoric rise in late January as the “David vs. Goliath” narrative attracted Robinhood traders to heavily-shorted stocks.

What’s fascinating to data-junkies like us at Wall Street Horizon is that the ‘high short interest’ factor performs very poorly over time. It’s only until very recently has the group of stocks surged. Bank of America Global Research noted last month that, “small cap factor work suggests that historically, these stocks tend to chronically underperform – the top quintile by the short interest factors we track (rebalanced monthly) has lagged the equal-weighted index by 4-6% per year on average since 1988.”

Workhorse Group, Inc (WKHS) reported earnings this morning before the bell on Wall Street. The announcement was earlier than history suggested. Let’s dig into the details. On November 11, Wall Street Horizon set an Unconfirmed Q4 2020 earnings date of March 10 (before market) based on the company’s reporting trends for providing Q4 results. WKHS has a history of reporting Q4 results between March 10 and March 18 with no day of the week trend. On the morning of February 18, WKHS issued a press release stating quarterly results would be issued on March 1 (before market). Wall Street Horizon quickly alerted clients to the change. The earlier than usual earnings date resulted in a high Z-score of -4.61 and, important to short-term options traders, crossed the weekly options date of March 5.

Workhorse, like GameStop & AMC Entertainment, had a high short interest as a percent of market cap as of January. Bank of America Global Research pegged the figure at 29%. Like many high short interest stocks, WKHS surged in January. The stock was up more than 100% on the year as of early February. What goes up, often must come down in today’s market though. WKHS plummeted from nearly $43 less than a month ago to $12.50 last week. The fundamental driver was new that the firm lost an important $6 billion contract with USPS. To make matters worse, there are claims of potential securities fraud at the company.

Next up is 3D Systems (DDD) which re-confirmed its earnings date. A reconfirmation is when a firm publicly declares an earnings date, then publicly changes it. It’s a potential red flag to traders to be on the lookout for unusual news.

Seasoned traders recall the bubble that was 3D printing several years ago; it was the next hot thing in the early 2010s. DDD went from the low single-digits to near $100 per share from 2009 to early 2014. The bubble burst though, and DDD bottomed under $5 last year. 2021’s speculative mania caught DDD. The stock now trades above $35.

As for the company’s earnings report, DDD will report after the bell on Wall Street today with a subsequent conference call tomorrow at 8:30 am ET. On January 7, DDD issued a press release stating Q4 results would be released on February 24 (after market) with a conference call on February 25. Just a day before the originally announced earnings date, DDD issued a press release delaying quarterly results until March 1. Wall Street Horizon quickly informed clients of the breaking news.

Microcaps on the Move

There has been heavy speculative buying in 2021 in groups of stocks that underperformed during not only 2020, for the better part of the last several years. It was just a few months ago when market pundits were critical of the strength of the bull market given the relative weakness among small and mid caps. The bearish case was that the FAANG stocks were holding up the indexes. Things changed quickly though as small and micro caps began to surge starting in early November.

Sector performance YTD shows a reversal of the last few years as well. Energy and Financials are the clear winners so far in 2021 while Utilities, plagued by rising interest rates, and Consumer Staples are the only sectors with a negative total return. Technology, by far the biggest weighting in the S&P 500, is up just modestly.

FactSet notes that the Micro Cap ETF (IWC) has a 14% weight in Information Technology and 22% stake in Financials. Contrast that with the S&P 500 large cap ETF’s (IVV) 34% position in IT and 13% weight in Financials. 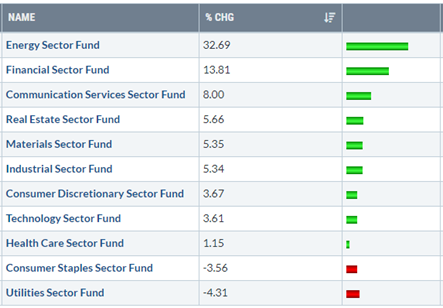 The size factor has not been the only speculative story this year. The crypto space continues to feature impressive moves.

This earnings season has been interesting from the perspective of the adoption of bitcoin. Elon Musk made headlines in February announcing that Tesla (TSLA) took a $1.5 billion position in the cryptocurrency and plans to accept it as a type of payment. Later during the reporting season, Square (SQ) said it bought 3,318 bitcoin in Q4 2020.

The story of crypto’s adoption by global companies and other financial institutions could be a key theme of 2021. Bitcoin is a strange asset in that the higher it goes, the more realistic it seems that it will become apart of everyday life as a form of payment in the not-too-distant future. Still, bitcoin is extremely volatile – exhibiting 10% daily moves (up or down) routinely. There is likely a long way to go before its seen as a primary currency. That $1 trillion valuation is nothing to scoff at, however.