The big economic data point last week was retail sales. Economists expected a soft gain in January, but the report came in hot across the board. The 5.3% rise reversed declines seen in the three prior months as COVID-19 stimulus aided US consumers. It was the biggest monthly jump in seven months. The significant upside surprise caused a spike in the Atlanta Fed’s GDPNow forecast to 9.5% for Q1.

Expectations call for additional COVID relief in the coming weeks despite an improving economic backdrop and rather drastically improving COVID-19 conditions. The Democrats’ proposal would send another round of checks to low and middle income Americans in the amount of $1,400 while extending special unemployment benefits.

Goldman Sachs raised its full-year 2021 GDP forecast to a whopping 7% following the recent trend of solid economic data while Bank of America’s outlook still calls for 6% growth this year. 2021 could feature the highest GDP growth since 1984’s 7.2%.

Putting it all together, strong economic data, stimulus hopes, and quickly improving COVID-19 trends could be the goldilocks scenario for developed economies. Executives remain optimistic as earning season wraps up. Bank of America Global Research notes that corporate sentiment on earnings calls has recovered to pre-COVID levels and earnings guidance remains near record levels. 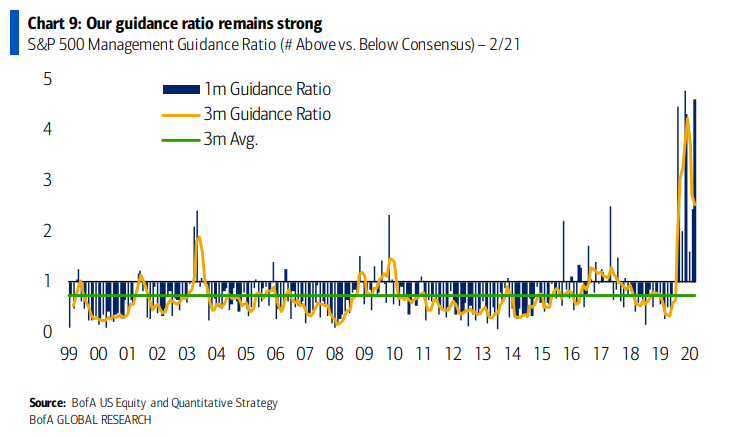 S&P 500 firms currently sit on $2.5 trillion of cash and short-term reserves according to S&P Global Ratings. A recent BofA survey of fund managers finds that there is a growing appetite for executives to use the cash to increase capital spending at the expense of improving corporate balance sheets. That is a sign that economic growth is on the mend. There is still little support for increased stock repurchases and dividends, however.

So 2021 shapes up to be a fascinating year regarding how companies operate. It’s more important than ever for traders and portfolio managers to monitor the tone of executives at shareholder meetings and analyst days in addition to monitoring earnings reports. The business environment pulled a 180 quicker than perhaps any other time in history. Traders must also keep an eye on the unexpected – like the weather.

This week is the peak week of earnings with 1,778 worldwide names reporting, and 1,255 in North America.

First up is Trinity Industries (TRN). Trinity is in the Industrials sector and provides products and services to energy, transportation, and industrial firms. The Dallas-based company was forced to delay its earnings report due to severe weather and power outages in the area. Wall Street Horizon quickly alerted clients to the change. On October 22, Wall Street Horizon set an Unconfirmed Q4 2020 earnings date of February 17 (after market) based on historical reporting trends. On February 1, TRN issued a press release stating results would be released on February 18 (before market). On the afternoon of February 15, the company issued a subsequent press release changing the Q4 earnings date to February 24 (before market). Importantly for options traders, the delay crossed last Friday’s options expiration date. The earnings report delay resulted in a high Z-score of 3.05.

Next up is American Campus Communities (ACC). This Real Estate Investment Trust is headquartered in the very hard-hit city of Austin. Power outages lingered days after the record-breaking cold. An ice storm also hindered a quick recovery in the area. The stock chart of ACC has held steady though, similar to TRN’s. For ACC, Wall Street Horizon set an Unconfirmed Q4 earnings date of February 18 (after market) based on historical reporting trends. On February 2, ACC issued a press release stating Q4 results would be released on February 16 (after market). On the afternoon of February 15, the company issued a subsequent press release changing its Q4 earnings date to February 22 (after market). Like TRN, the late change crossed last Friday’s February options expiration.

Exogenous events can have a big impact on markets and individual equity & options positions. Traders must stay on top of late-breaking corporate event news. Recall the earnings announcement changes listed above – in the case of ACC and OXY, the changes came within 24 hours of the originally scheduled earnings announcements. Wall Street Horizon was swift to alert our clients to these changes (among others). Our job is to provide the latest corporate event data to clients. Traders must possess this key intel to manage positions in quickly-moving markets.