Does a Spike in Dividend Decrease Announcements Portend 2023 Volatility?

The S&P 500 surged to cap off a positive November. A not-so-hawkish speech from Fed Chair Jerome Powell was the spark needed to finally send U.S. large-cap stocks above their collective 200-day moving average for the first time since April. The bullish thrust came ahead of what is usually a cheery time on Wall Street. Historically, December results in a positive return for the S&P 500 72% of the time with an average return of 1.3% in data going back to 1950. With impressive recent retail earnings, the tone is positive on Wall Street...for now.

Is there a canary in the coal mine, though? Wall Street Horizon found that there has been an uptick in the percentage of global firms issuing dividend decrease announcements thus far in the back half of the year. While not a stunning inflection, the net number of dividend increases has declined as equities endure a tough year, but not an awful one. With a little December cheer, some retail therapy, and some help from Jay Powell and the Fed, equity losses could end up being somewhat modest. 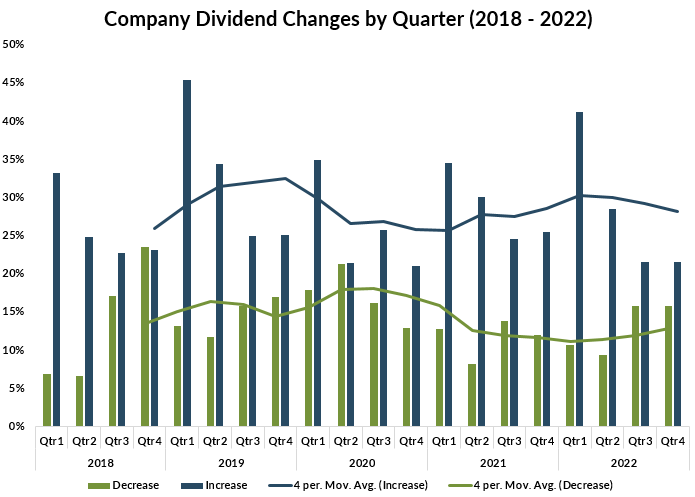 The net number of firms slashing dividends comes ahead of what many economists expect to be a soft technical recession during the first two quarters of next year. That gloomy outlook does not jive with current U.S. GDP readings that suggest robust economic expansion.

Just last week, domestic third-quarter GDP was revised upward to show an above-trend expansion of 2.9%. Moreover, the Atlanta Fed’s GDPnow model for Q4, updated December 1, shows a 2.8% figure. To be fair, economists’ consensus forecast for this quarter’s growth is much softer, near +0.7%, before turning negative to kickstart 2023.

Bearish Trends Ahead of the New Year

In all, 16% of global companies announced a decrease in their payouts in Q3, up from 14% in the same period a year earlier. This quarter also tracks at 16% which would be a significant four-percentage-point jump from Q4 2021. Also bearish is the downtick in firms hiking dividends. The second half of last year featured 25% of companies increasing dividends versus just 21% so far in this second half.

The cautious trend comes as portfolio managers seek safety in corporate balance sheets as they search for the right stocks to buy. The latest BofA Global Fund Manager Survey revealed that respondents overwhelmingly desire firms to improve balance sheets rather than prefer executives invest in capital projects or return cash to shareholders. At the same time, a record year for corporate buybacks could be in the works. 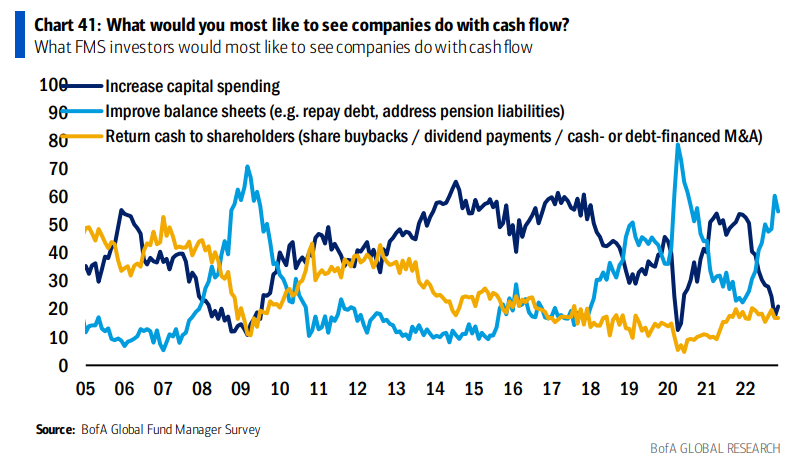 Investors hungry for yield might be well served by hunting overseas. Consider that the current forward dividend rate on non-U.S. equities of 3.7% is nearly two percentage points higher than that of the S&P 500 – which is almost two standard deviations above the long-term average spread of 1.2%, according to J.P. Morgan Asset Management and FactSet.

Sector & Factor Check: Where the Largest Yields Are Seen

Sector-wise, domestic stocks within Real Estate, not surprisingly, pay out the most cash to shareholders with a 3.8% yield as many REITs encompass that small part of the S&P 500. Elsewhere, though, Utilities yield 3.3% and Energy shares feature a 2.8% dividend rate. Finally, Goldman Sachs noted recently that the Dividend Growth equity factor was the second-best strategy basket in 2022 through the middle of November as folks flee from risky high-growth shares. But will that trend keep up next year?

To end on a bullish note, consider that high-dividend stocks compared to low-dividend equities are more than one standard deviation to the cheap side when assessing long-term relative valuations, per Goldman. Even with strong returns so far in the year, there could be more upside looking longer-term if we see a reversion to the mean in relative valuations.

Combine low relative valuations, a possible macro market shift from expansion to recession, and a rising number of firms cutting dividends, and portfolio managers have their work cut out for them as they set allocations for the new year. As always, there are many moving pieces in this market puzzle.

Global stocks have rallied big from their October lows as inflation wanes and hopes of an eventual Fed pivot permeate markets. Wall Street Horizon’s data paints a less sanguine picture, at least when analyzing trends in dividend change announcements among foreign and domestic companies. As money managers align portfolios for expectations in the new year, having the most accurate and comprehensive forward-looking corporate event data is a must.