With an economic recession looming, is an earnings recession to follow?

On Thursday, the Q2 reading for US GDP showed another quarterly decline of 0.9%, following Q1’s decline of 1.6%. The technical definition of a recession is two consecutive quarters of contractions, but it may still be some time before the National Bureau of Economic Research declares an official recession. Despite that possibility, earnings for Q2 are still on track to grow 6.0% in Q2.

During the last recession (Q1 and Q2 2020), an earnings recession happened in lockstep with the broader economic recession and even outlasted falling GDP figures. In 2020 S&P 500 profits fell in Q1, Q2 and Q3, rebounding in Q4. So far analysts still anticipate growth for every quarter of this year and into 2023, but those estimates are starting to trend lower.

What could topple earnings growth this quarter? Big tech is doing its best. Microsoft, Alphabet, Amazon and Meta all reported disappointing EPS results when they released quarterly results last week. Everything from inflation, the stronger dollar and supply chain disruptions were named as the reason for weaker-than-expected results.

Our proprietary measure of corporate uncertainty continues to worsen as Q2 earnings season rolls on.

A LERI reading over 100 indicates more companies are delaying reports and is meant to be watched carefully. Thus far we see a LERI of 142 for the Q2 season, dangerously close to the Q1 2020 reading of 147 which came as companies were grappling with the beginning of the COVID-19 pandemic and suggesting that US companies are feeling uncertain about their future growth potential. In terms of raw numbers, 45 companies have confirmed earlier Q2 earnings dates, while 64 have confirmed later than normal earnings dates. 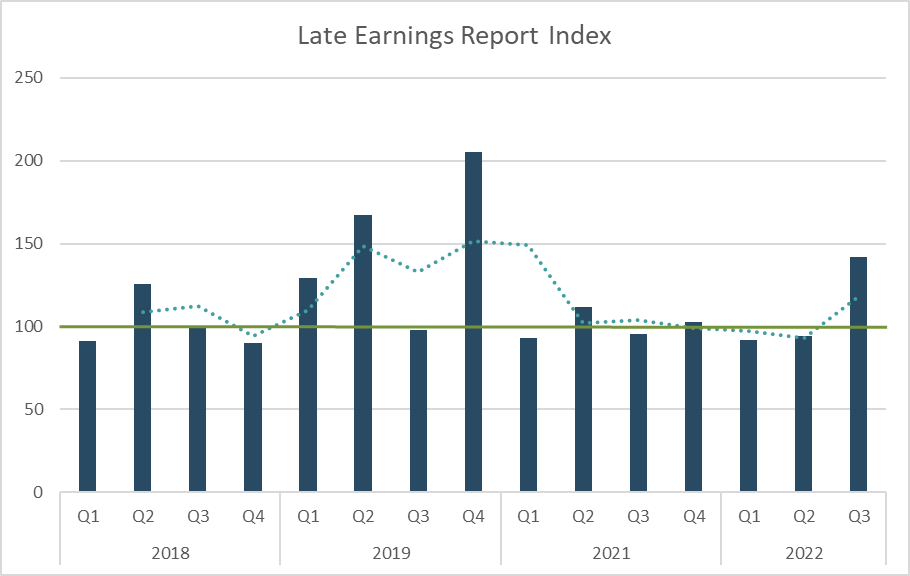 The Busiest Week of the Q2 Earnings Season is on Deck

This week marks the busiest for the Q2 season, with 2,672 companies (in our universe of 10,000 publicly traded names) set to report. Sectors in focus will be Industrials, Health Care and Consumer Discretionary. 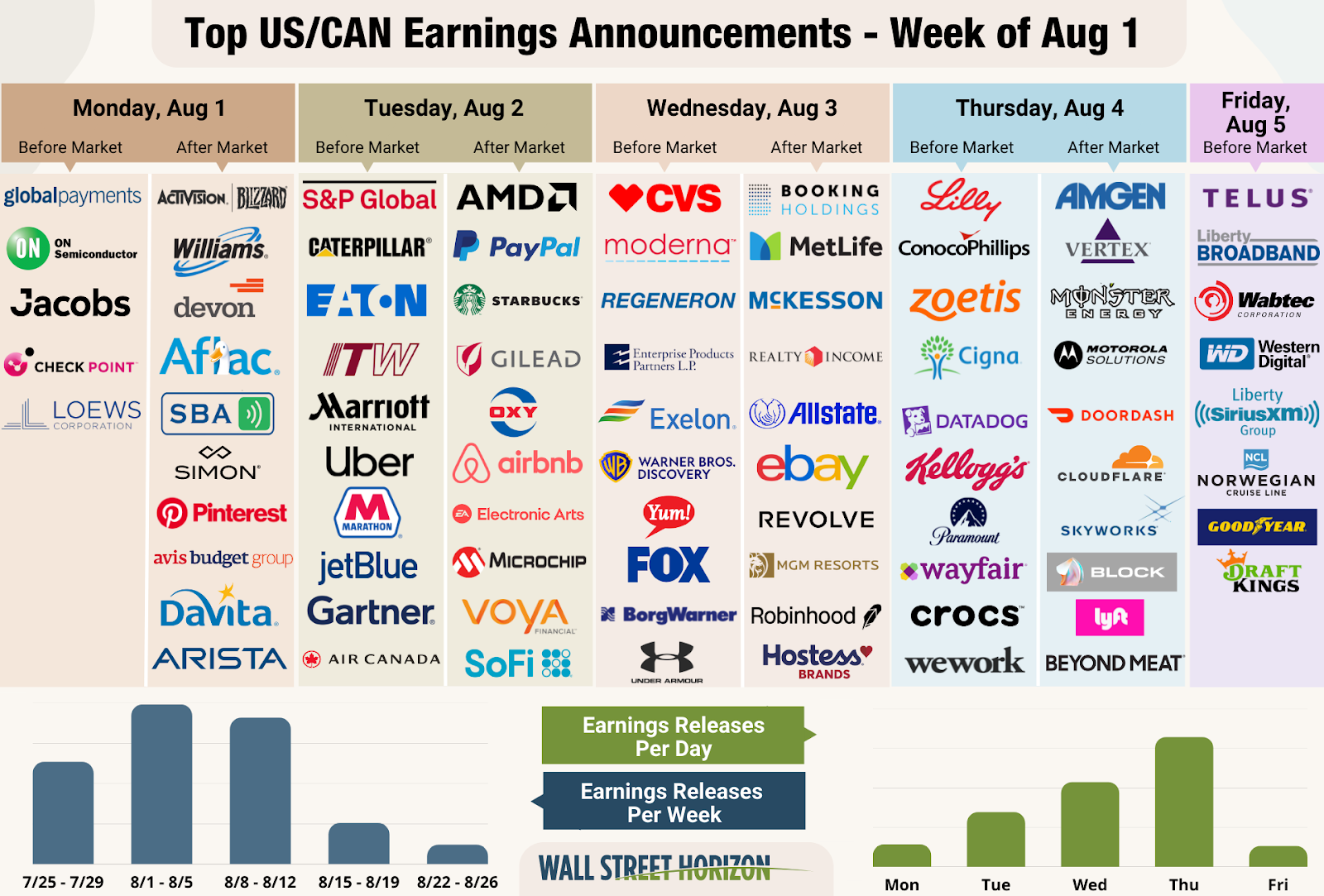 This week we get results from a number of large companies on major indexes that have pushed their Q2 earnings dates past their historical norms. Eight companies within the S&P 500 confirmed outlier earnings dates for this week, seven of which are later than usual and therefore have negative DateBreaks Factors*. Those seven names are Monolithic Power Systems (MPWR), Advanced Micro Devices (AMD), Coterra Energy (CTRA), Gilead Sciences (GILD), PayPal Holdings (PYPL), Vertex Pharmaceuticals (VRTX) and Wabtec Corp (WAB). Other notable names such as JetBlue (JBLU) confirmed later than usual dates. On the flipside, S&P 500 companies confirming earlier than usual dates include Steris (STE) and DXC Technology (DXC).

AMD has gradually been pushing back their Q2 earnings date. From 2013 - 2016 they regularly reported earnings the second to last week of July, from 2017 - 2021 they shifted Q2 reporting to the last week in July, and in 2022 they are set to report in August for the first time. They have also established a strong Tuesday trend over the last three years.

Semiconductors have been in focus in the last couple of weeks as earnings begin to roll in and the CHIPS act is being voted on in Congress. While some big names such as Taiwan Semiconductor Manufacturing (TSM) reported big beats on the top and bottom-line when they reported for Q2, leading to an increase in guidance, other names such as ASML lowered guidance on the back of supply chain disruptions and economic uncertainty. We will see on Tuesday which path AMD follows, but academic research suggests that reporting a week later than usual is a signal that bad news will be shared on the earnings call.

Similar to AMD, Gilead has always been a July reporter for Q2, shifting to August for the first time in 2022. A later than expected report date is typically synonymous with bad news ahead, which is also in-line with analysts expectations for negative EPS and revenue growth for the quarter.

On July 7, PayPal confirmed they would report Q2 financial results on Tuesday, August 2. Not only is this their first time reporting Q2 results on a Wednesday in the last five years, but this is their first August report ever.  Analysts have been drawing down estimates heading into earnings, with YoY EPS now expected to fall 24%.

When JetBlue confirmed their Q2 earnings date on July 19 it was for a week later than they historically report. That of course signals bad news will be announced, which is in-line with how other airlines reported this quarter. Delta, United and American all missed profit expectations and announced they were scaling back capacity. However, it’s important to keep in mind JetBlue is also currently pursuing a $3.8B takeover of Spirit Airlines, a move that would create the country’s fifth-largest airline. M&A activity can often change when a company reports for a certain quarter.

This season peak weeks will fall between July 25 - August 12, with August 4 predicted to be the most active day with 1,042 companies anticipated to report. Roughly 71% of companies have confirmed at this point (out of our universe of 10,000 global names). The remaining dates are estimated based on historical reporting data. 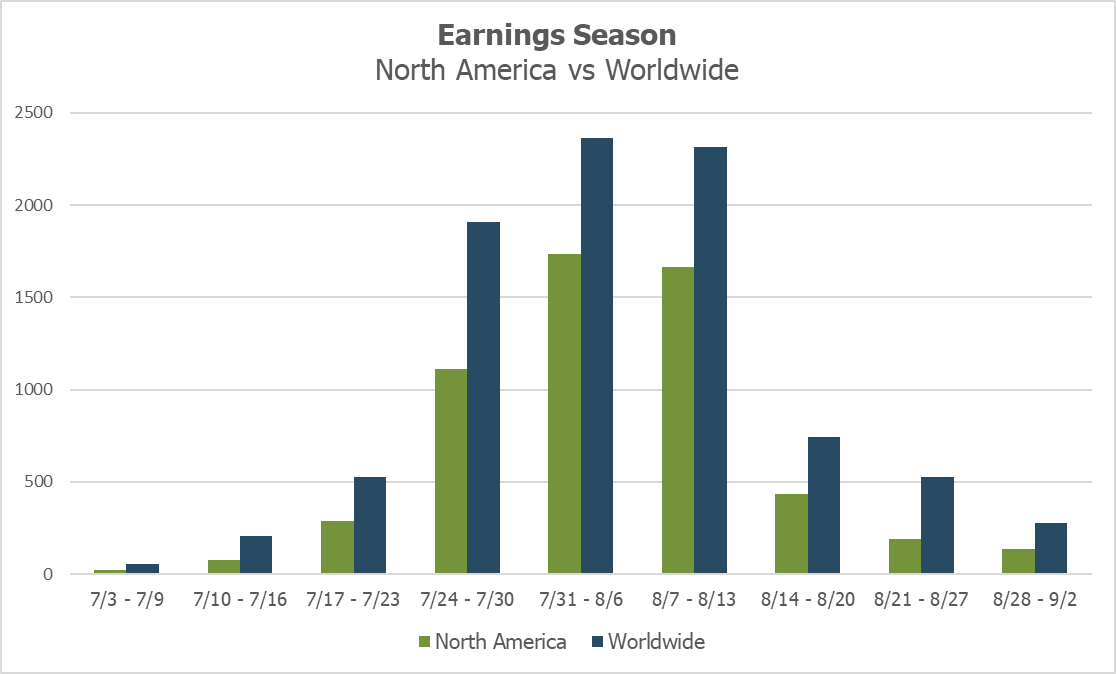