Traders are again reminded of how important one disappointing earnings report or even cautious words from an executive can be. As earnings season ends, investors look back on the last six weeks in awe of the many single-stock plunges and their market-wide impacts. Risk as a result of information released during key corporate events is a clear and present danger. It seems no stock, apart from maybe the Energy sector, is left unscathed.

Within the last week, Walmart (WMT), now the fourth-largest stock in the major Consumer Staples ETF, reported Q1 results that featured a massive inventory build. It was a sign of dismal operational execution. It also said that over-staffing was a significant contributor to a big margin miss. Then Target (TGT) added to the retail turmoil by posting profit results that missed analyst expectations and cited big transportation costs that it might absorb rather than pass along to the consumer, according to the Wall Street Journal. The retailer went on to endure the second-worst day in its history. Only Black Monday 1987 was more grim. In fact, Thursday’s 6.43% plunge, as illustrated in the chart below, was a worse day for the Staples sector than any other single session during the Great Financial Crisis – all caused by just a pair of corporate earnings reports..

Consumer Staples: Not So Safe 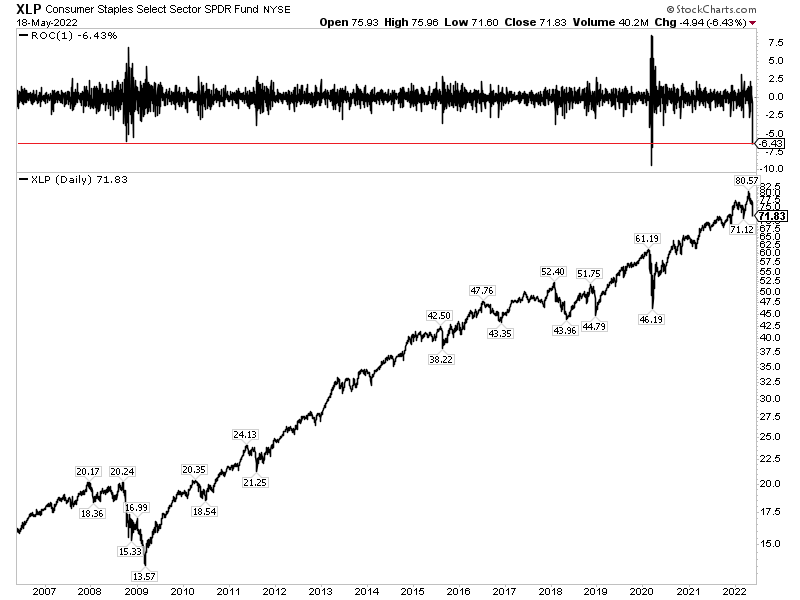 The bludgeoning might not be done. There are still key companies yet to report earnings. So which companies step up to the plate?

Jack in the Box (JACK)

Are you hungry for more supply chain and labor-related risks? Jack in the Box (JACK), a $1.7 billion market cap California-based restaurant stock in the Consumer Discretionary sector, catches our eye with a later-than-usual earnings date. JACK reports results on Thursday the 26th which is more than two weeks later than its historical pattern, resulting in a whopping (not to be confused with Whopper from one of its competitors) Datebreaks Factor* of -3. Shares are down about 40% from their high a year ago as the company navigates an increasingly tougher environment for lower-end consumers.

*The DateBreaks Factor is a Wall Street Horizon proprietary measure, using a modified z-score protocol which looks at standard deviations from the norm and that captures the extent to which a confirmed earnings date deviates or breaks from historical trend (last 5 years) for the same quarter. Negative means the earnings date is confirmed to be later than historical average while Positive is earlier. 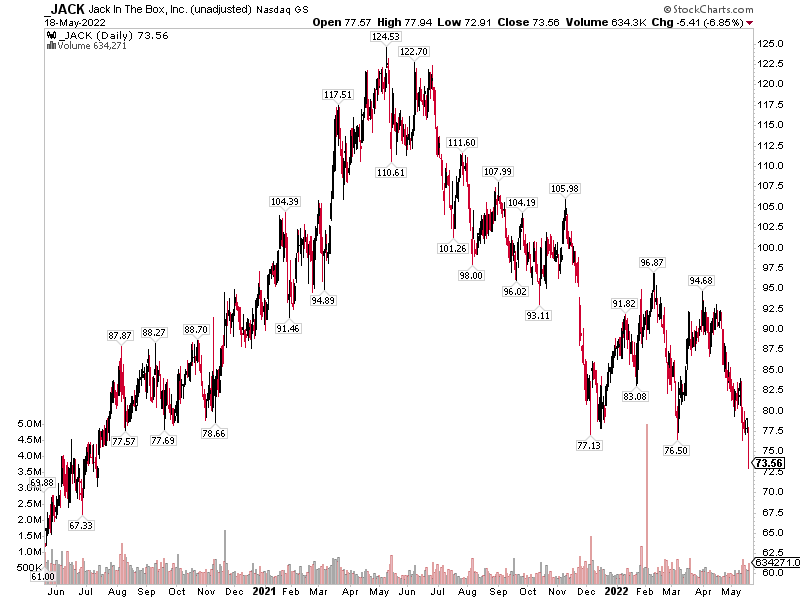 Traders should keep a close watch on earnings movers during the final full week of May. A few key retailers will hopefully soften the blow caused by WMT and TGT last week. Consider that Home Depot (HD) and TJX Cos (TJX) had decent results and execution, so it’s not all bad.

Retail Stays in the Spotlight

Where will the risk be for AutoZone (AZO) and Best Buy (BBY) when they report Tuesday morning? Macy’s (M) issues results Thursday after market. Then stay up to date with the latest trends from American Eagle Outfitters (AEO) Thursday afternoon. That’s also when all eyes will be focused on what cards Costco (COST) reveals after its string of strong same store sales interim data. COST then reports May sales numbers on June 2.

It’s not all about retail. A set of tech-related names have confirmed earnings dates before the holiday weekend. Let’s Zoom In. Zoom Inc (ZM) starts things off Monday after market followed by perhaps the most important company issuing results, NVIDIA (NVDA) on Wednesday after market before its shareholder meeting on June 2. That’s when the once-high-flying Snowflake (SNOW) reports as well. Outside of the U.S., Alibaba (BABA) hopes to turn its stock around with a positive EPS surprise Thursday before market open.

While the bulk of Q1 corporate earnings season is in the books, almost any of these companies can rattle investors’ fragile psyche right now. Traders must stay on top of key corporate events to properly manage risk. 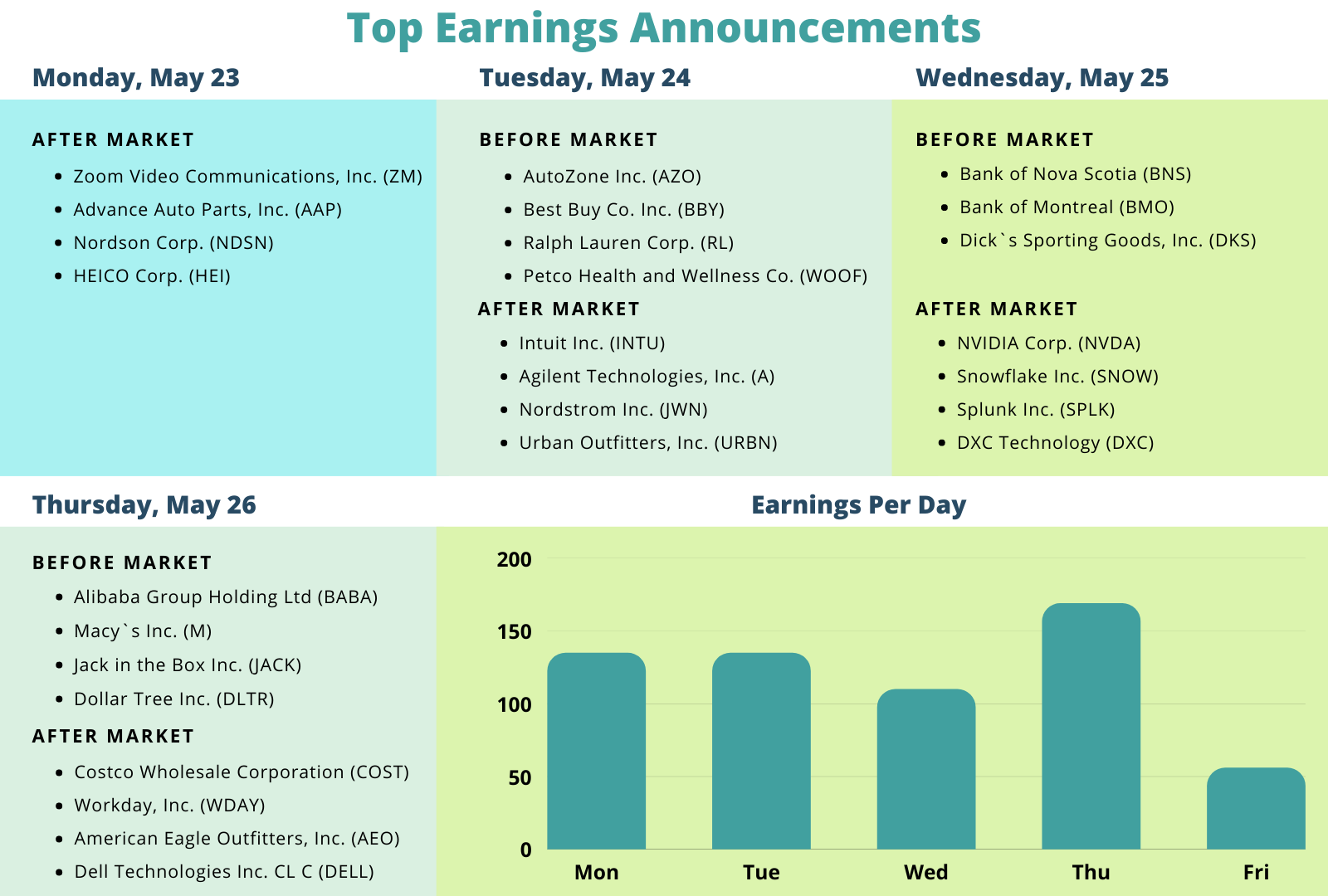 Crossing our radar with an Unconfirmed earnings date is Colgate-Palmolive (CL). This Consumer Staples stock typically confirms its Q2 earnings date on May 3 +/- 4.5 days. As of May 19, the company had yet to confirm its next reporting date, resulting in a significant late confirmation timing Z-score of 3.38. The last few months have proven just how important reporting good numbers to the street is, so any unusual or poor news is a red flag for traders owning shares in this environment. That might go for high-P/E stocks even more – CL's trailing P/E ratio is above 31, which is sky-high for a steady consumer stock.

CL stock has been a relative winner over the last year, considering it is not in a downtrend! Shares have traded in a range between the low-$70s and mid-$80s for the better part of two years. Could this confirmation timing outlier indicate that a catalyst to break that range is on the way? Back in April, a Barron’s piece underscored what a tough operating environment it is right now for consumer companies with complex supply chains. The firm said it expects a “difficult cost environment” to persist. That jittery sentiment was echoed by a handful of major retailers who reported recently. Wall Street Horizon has an Unconfirmed earnings date of July 29 after market, but that date could shift. 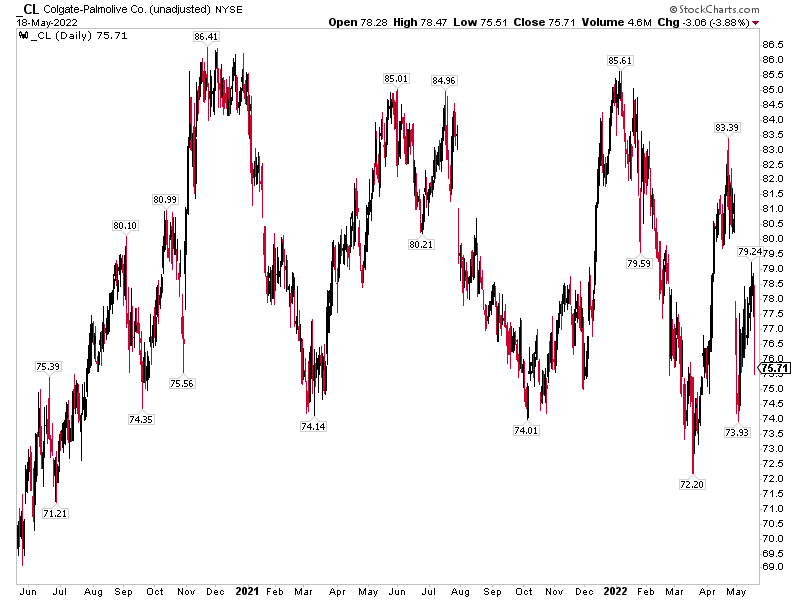 One last volatility catalyst to keep in the back of traders’ minds: JPM’s Investor Day on Monday, May 23. Following news that shareholders voted down CEO Jamie Dimon’s pay package, there could be more unexpected words expressed by analysts and executives at the event. Impacts might be felt across the Financials sector.

This year continues to feature astonishing single-stock moves that cascade into broad market selloffs. Still, sharp short-covering rallies from just a positive whisper can spark impressive upside moves. This kind of volatility makes it all the more important that money managers have constant access to the most accurate corporate event data. Risk management might be the theme of 2022.