The earnings are great, but the revenues are an even better indication of the current economic recovery
We’re now past the halfway point of the Q2 2021 earnings season and to say companies have delivered is an understatement. Last week we were keeping an eye on Big Tech to make sure they held up their end of the bargain, and they did… all the FAAMG names beat on the bottom-line, with only Amazon missing on the top line. On average they beat by a margin of 25% (EPS) and 5% (revenue), respectively. That even outpaces how well the overall S&P 500 has performed.

According to FactSet, thus far 88% of the 295 S&P 500 companies that have reported have beaten on the bottom-line by an average of 17.2%. However, revenues should be looked at even more closely. Right now 88% of companies have surpassed top-line estimates, by a margin of 4.5% (highest rate since 2008). Positive revenue surprises are less common than earnings surprises, as revenue numbers are harder to manipulate, and no accounting tactics can change that. This suggests that the economic recovery is still strong and steady. Forward looking estimates would suggest that as well.

Despite some concerns around inflation and the COVID-19 Delta variant that we saw present in the markets a couple of weeks ago, investors and analysts alike seem to have shrugged that off as estimates continue to rise for the second half of the year. Many still believe these numbers are too low and will increase as those quarters get closer.

Earnings Confirmed for Q2:
As of Friday, 69% of companies have confirmed their earnings dates for Q2, out of our universe of 9,000+. So far only 25% of those names have reported. 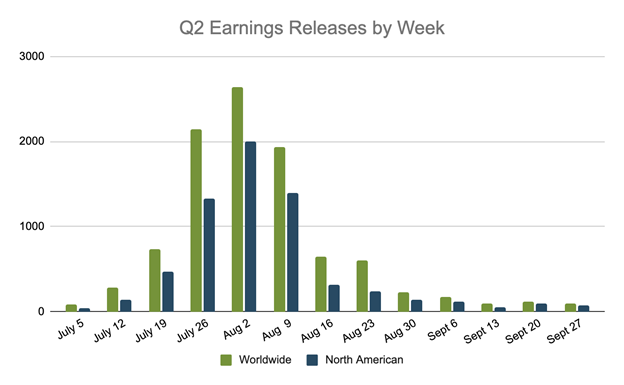 Earnings out this week Earnings Date Outlier
As always we’re keeping a close look at earnings date outliers, companies that are reporting earnings on a date outside of their historical range, which could provide a clue as to what the upcoming report and call will reveal. But this week we also have a revision to add to the mix, a company that set their earnings date and then subsequently changed it.

Let’s start with our outlier.

Goodyear Tire & Rubber Co (GT), based in Ohio, is a $4.3 billion market cap firm in the Consumer Discretionary sector. Known as a leader in the tire industry, GT has operations around the world and announced in February that it would further its industry dominance by acquiring Cooper Tires. The deal was completed in June. Goodyear is hopeful that the two brand portfolios will add value. Unfortunately, the stock price has not buttressed that corporate goal so far. Shares of GT have fallen from a June peak near $21 to a mid-July nadir under $15. Can this week’s earnings report turn things around?

Outlier Analysis
Goodyear typically reports between July 26 and 31 with a Friday trend. On April 22, Wall Street Horizon set a July 30 Unconfirmed earnings date based on its history. On July 23, however, GT announced on its website that it would be reporting on August 6 before market. The resulting Z-score is a high 4.2. Traders should note that Goodyear completed the deal with Cooper on June 7, so there could be more news to come regarding this corporate activity. Friday morning’s earnings release will be something portfolio managers should monitor.

BP PLC (BP) is the 8th biggest company on the United Kingdom’s FTSE 100 index with a market cap greater than £55 billion. It’s among the largest Energy stocks in the world. BP is also a darling for dividend-focused investors as the stock yields more than 5%. It’s a large position for many global portfolio managers, so the upcoming earnings report is certainly one to watch closely.

The Energy Sector Sours
Shares of the oil and gas giant have come under pressure lately as the economic recovery has been called into question due to rising COVID cases from the Delta Variant. Europe is among the hardest-hit regions. BP’s stock price fell about 20% peak to trough from June to July. Still, oil prices remain elevated versus earlier this year while natural gas and power prices in Europe have skyrocketed.

ESG Flows Surge in 2021
Also in focus for firms like BP is ESG. As an integrated oil and gas company with upstream, midstream, and downstream segments, the London-based firm must keep a keen eye on its environmental impact. BP is still making payments for the infamous 2010 oil spill. European investors may be wary of putting money to work in BP due to its environmental risk—Europe ESG equity funds recorded $10 billion from January through May (+83% y/y), according to BofA Global Research. Needless to say, headwinds are plentiful.

Revision Analysis
BP has a history of reporting Q2 results on July 28. On April 28, we updated its Q2 2021 earnings date to July 27 per the company’s website calendar (no disclaimer was listed). We only had a DVV from BP once before for a calendar change. On May 28, BP changed its calendar date from July 27 to August 3, and we then reconfirmed BP for August 3 Before Market Confirmed. Traders should watch the stock for potentially unusual news to be reported in the earnings release.

Next week marks the last peak week of earnings season with just shy of 2,000 companies from our universe reporting.