Investing carries many risks an investor must navigate when determining a suitable investment. When investing in a single entity, the company's future earnings potential is often the key to the share price future performance. If your determination of the company's fair value is correct, you can often enter into a position at an advantageous price. The article below will update my bullish stance on the prospects of Pfizer (NYSE:PFE) in light of the recent termination of the deal for Allergan (NYSE:AGN). The original article can be seen here.

PFE is in the midst of an audacious plan to reshape the company to be able to compete more efficiently. One of the main goals of the plan is to complete a tax inversion whereas PFE would change its tax domicile to a foreign address. The widely commented reason for the move is for PFE to save money on its yearly tax bill. The view is partially correct, yet the overriding concern for the current management team is to tap the enormous cash hoard held overseas due to the outdated US tax code. PFE holds over $50 billion in cash overseas, money that they are unable to use unless they issue debt.

With today's announcement that the deal to purchase AGN is canceled, PFE has hit the proverbial road block yet again. This is PFE second failed attempt the first came in 2014 when they sought to buy AstraZeneca (NYSE:AZN). PFE will pay AGN $150 million dollars to cover the costs incurred thus far while trying to complete the merger.

The path forward for PFE remains a bit cloudy yet a few key events over the course of the next year should illuminate the next course of action. I will highlight as few events below. 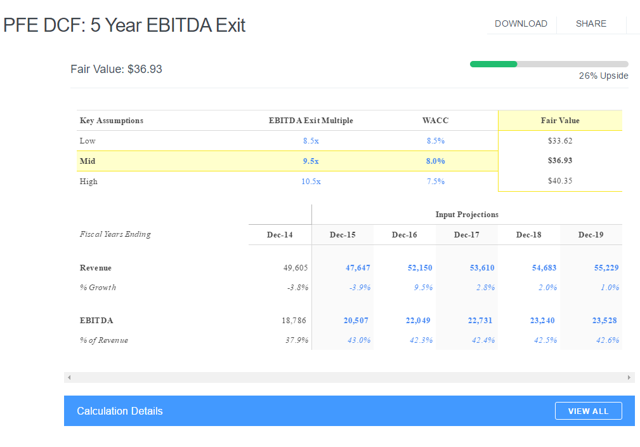 My fair value for PFE remains $36.93 as shown in the table above. In my original piece, I mentioned that PFE was the safer choice as shown below:

Getting paid to wait

In my view, the more interesting play here is PFE for two distinct reasons. The first revolves around risk. If the deal to acquire AGN is scuttled, the shares of AGN will plummet, handing short-term players an immediate capital loss. Shares of PFE may rise as buying pressure would emerge as arbs would cover the shares of PFE held short. The second reason for my optimism towards PFE is the generous dividend. PFE's current dividend yield is approximately 4%, far superior to most income plays readily available to investors. There is significant value embedded in the share price of PFE as a standalone company as displayed by the Finbox DCF table shown above. 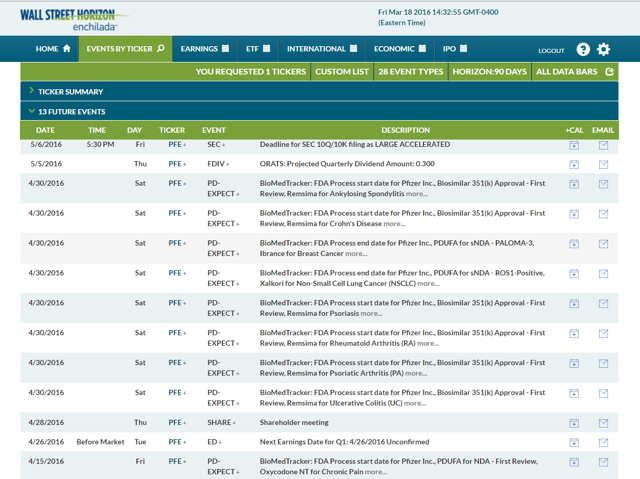 I am not surprised the US Treasury took action to torpedo the deal. Losing a high-profile company such as PFE would have been an embarrassment to any administration. The political risk involved in the deal was the main reason the merger spread remained as wide as it did. I expect PFE shares to continue to power higher over the course of the next couple of days as the shares held short are repurchased by those who tried to profit from the deal premium by holding shares of PFE short while going long AGN. I will continue to monitor PFE and will post a timely update after their earnings announcement. Thank you for reading, and I look forward to your comments.