Pfizer Is Poised For Long-Term Outperformance

Adding Pfizer to the Model Portfolio

When executed correctly, a well-timed merger will serve as a catalyst for the newly formed company. In the pharmaceutical space, mergers are particularly useful as they allow the acquirer access to multiple late-stage drug candidates, bypassing the perilous early stage discovery trials. This article will discuss my views on the pending marriage of Pfizer (NYSE:PFE) and Allergan (NYSE:AGN). 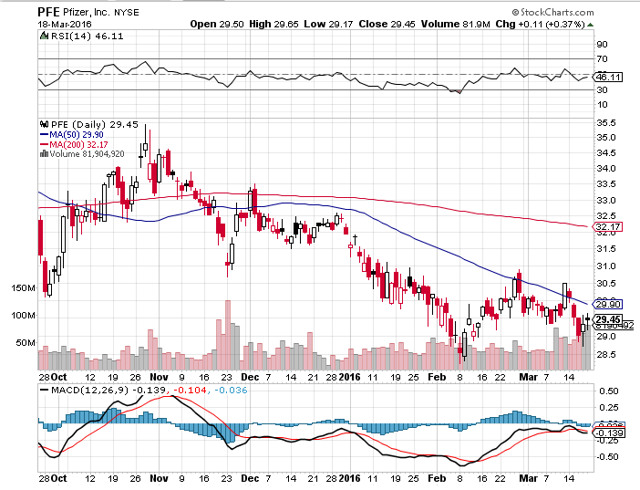 PFE and AGN have agreed to a merger where AGN shareholders will receive 11.3 shares of PFE's stock per share of AGN held. The deal is controversial as the combined entities will incorporate in Ireland to utilize the 15% corporate tax rate. The move is known as a "tax inversion" which has caused widespread scorn from the politicians of both political parties in the US. The move to seek a lower tax base should not come as a surprise; the US corporate tax rate is simply not competitive versus what can be readily had in other countries. Perhaps, post the upcoming election, corporate tax reform will come to the forefront eliminating the need for such deals. I suspect the PFE/AGN deal will be viewed as the catalyst for change.

Due to the controversial nature of the agreement, the risk of the deal not coming to fruition due to political concerns has heightened. Using the 11.3 ratios, based on a share price of PFE of $29.23, a shareholder of AGN would receive $330 per share. Shares of AGN are currently quoted at $270 per share. The spread here is quite large, in essence, if an investor were to purchase AGN and the deal closes as expected assuming fixed prices, a return of 22% on investment would be had. Evidently, the political risk here looms large.

Valuing Pfizer as a standalone company

To gain further perspective, let's examine the value of PFE as an independent entity. PFE is a behemoth with sales expected to top $50 billion in 2016. The largest challenge facing PFE is its inability to grow revenues. PFE's sales peaked at $67 billion in 2010; the company lost patent protection on its top-selling cholesterol med named Lipitor. The drop in revenues illustrates the challenge facing the drug industry, its high times while the patent is in force with margins routinely in the 80% range. Once the med is off patent, a severe drop in revenues occurs. Thus, the need to continuously invest in new drug development; the problem once you attain the size of PFE is blockbuster drugs such as Lipitor do not come along very often.

So one would think an investment in PFE has underperformed the market over the past five years then. That is simply not the case, using the Value Line 5 year index, PFE has returned 140% versus a 71% gain in the Value Line Arithmetic Index with 11/2015 serving as the end point in the comparison. A larger portion of the performance is due to the compounding of the dividend, with PFE routinely paying out more than 4% to shareholders. Yes, dividends mattered when coupled with a low multiple and held over an extended period.

As shown above, my fair value for PFE as a standalone company is $36.93 a significant discount to the current share price. Why is there such a disconnect between the current quote and the company's fair value?

Part of the reason is the complicated political landscape in the US. The pharma/biotech plays seem to swoon whenever a nominee sends out a tweet claiming they will tackle the exorbitant price hikes in medications. Similar fears gripped the industry before the rollout of the ObamaCare plans and yet healthcare is one of the best-performing sectors.

The second reason is the mechanics involved in the deal. To capture the arbitrage spread, hedge funds will short the acquirer while going long the company to be acquired. I have often found if one waits a few months after the announcement of the deal, by purchasing the acquiring company an attractive entry is at hand. A similar move was utilized to enter into Kraft Heinz (NASDAQ:KHC) before the deal was made as detailed here. As we can see from the slide below, business as usual continues at PFE with numerous PDUFA dates expected over the next 90 days. PFE is building out its biosimilar portfolio; the upcoming approvals will aid the companies overall growth profile. The chart is courtesy of Wall Street Horizon, a fantastic app for tracking future corporate events. 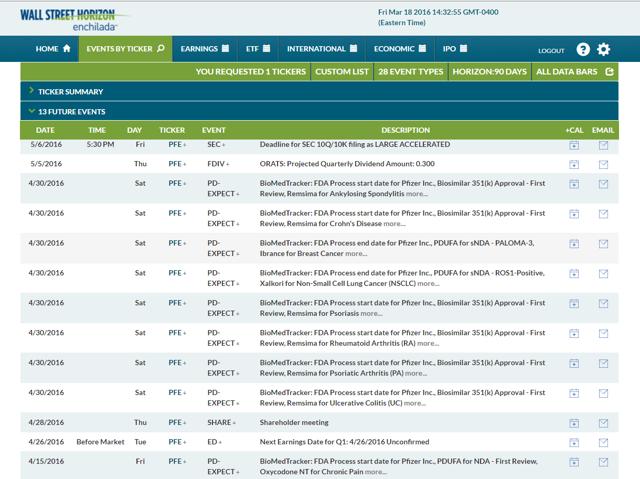 Getting paid to wait

In my view, the more interesting play here is PFE for two distinct reasons. The first revolves around risk. If the deal to acquire AGN is scuttled, the shares of AGN will plummet, handing short-term players an immediate capital loss. Shares of PFE may rise as buying pressure would emerge as arbs would cover the shares of PFE held short. The second reason for my optimism towards PFE is the generous dividend. PFE's current dividend yield is approximately 4%, far superior to most income plays readily available to investors. There is significant value embedded in the share price of PFE as a standalone company as displayed by the Finbox DCF table shown above.

Shares of PFE offer the rare opportunity for immediate income while adding a level of growth assuming the proposed merger is completed. In essence, PFE is the case study for Growth At a Reasonable Price (("GARP")) investors. I am long the shares as I view PFE as a core long-term hold. Part two of the report discussing the role of management along with the drug pipeline is available to subscribers of Undervalued Gems. Thanks for reading, and I look forward to your comments.

Disclaimer: Investors are always reminded that before making any investment, you should do your own proper due diligence on any name directly or indirectly mentioned in this article. Investors should also consider seeking advice from a broker or financial adviser before making any investment decisions. Any material in this article should be considered general information, and not relied on as a formal investment recommendation.