A Review Of The Components Of The iShares Biotech ETF: Gilead Sciences

The above table illustrates the top ten holdings of the IBB. The focus of this series is the top five holdings as they will account for a significant portion of the move in the IBB. The first part discussed the investment case for Regeneron Pharmaceuticals (NASDAQ:REGN) which can be seen here. The second part of the series discussed the investment merits of Amgen (NASDAQ:AMGN), which also can be seen here.

Shares of GILD have morphed into the ultimate battleground stock. The company caught fire in 2014 as the tantalizing prospect of a cure for Hepatitis C (HCV) entered the marketplace. The initial price tag of $1k per dose generated a ton of negative publicity as many seized on the list price as an egregious example of price gouging by the biotech industry. Lost in the echo chamber of modern media is the incredible advance in treating infectious disease. The vast majority of remedies brought forth from research only treat an underlying disease state; a cure is often tantalizingly out of reach.

Sales thus far for the HCV franchise is $35 billion and growing, yet the share price is trading on par with levels seen in 2014. A significant portion of the negative price action is attributed to the poor performance in Q1 of the HCV franchise. As discussed in an earlier piece, HCV sales dropped with Harvoni sales posting an unexpected year over year decline. 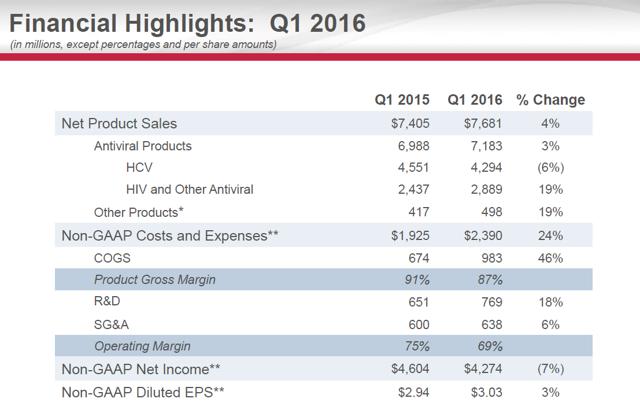 The reason stated is a delay in funding for the VA which pushed off treatment of vets afflicted with HCV into March thus ruining the quarter for GILD. The upcoming earnings report will go a long way to validate the excuse given; we should witness a "catch-up" in treatment over the course of the year. As shown below, management kept their earnings projections for 2016 intact. 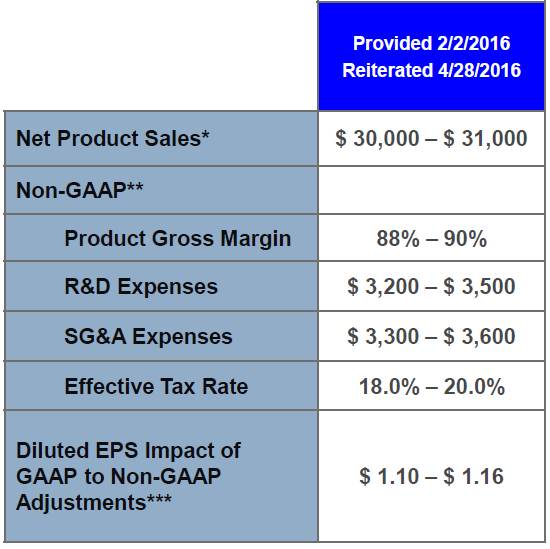 GILD labs have brought forth in my view a natural product extension with tenofovir alafenamide (TAF) a prodrug tenofovir. The beauty of TAF remains in its side effect profile; tenofovir may lead to renal toxicity. As the average age of those infected with HIV continues to rise, the ravages of aging begin most notably with decreased renal function. GILD very wisely brought TAF to market as a line extension replacing existing combos containing tenofovir. The improvement thus generates a new line of patented products well past the expected patent cliff beginning in 2021. I am interested to note the growth in the TAF lineup that will be revealed in the upcoming earnings report. Thus far in the past 9 months, GILD has received marketing approval for a new line of HIV meds coupled with a pan-genomic HCV product dubbed Epclusa. Epclusa combines Valpatasvir with Sofosbuvir, notice the importance yet again of Sofosbuvir. As detailed in a previous post on GILD, the courtroom win over Merck (NYSE:MRK) should finally allay the fears of revenue sharing of Sofosbuvir with a competing firm. Epclusa gained marketing approval from the FDA on June 28 th. Thus its sales impact on Q2 will be non-existent. I am interested in management's view on the long-term growth path for this property. 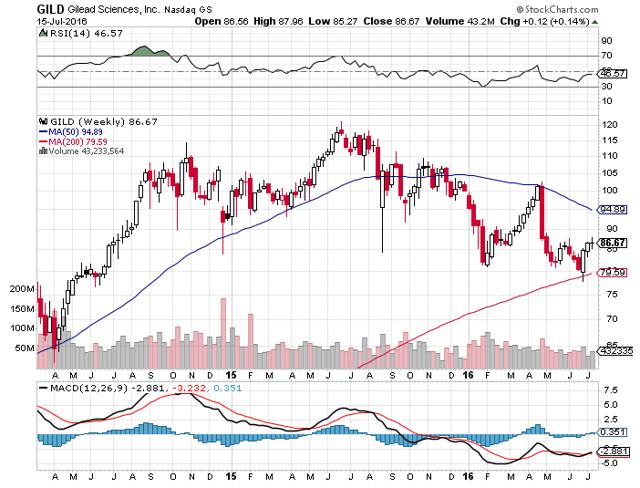 Above is a weekly chart of GILD going back to late March of 2014. Notice how GILD rode the recent biotech boom higher with the 50-week moving average capping any downward move. The chart changed in August of last year, in step with the sell-off in the IBB shown below. 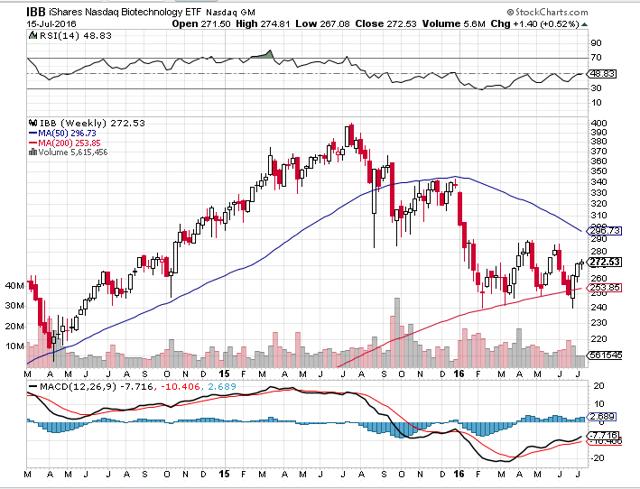 An attractive trading opportunity is before us with GILD serving as the potential catalyst. A strong earnings report next Monday with a decisive close above the 50 week MA may lead to a change in sentiment in this battered sector. GILD investors would welcome a beat and raise quarter thus indicating the awful Q1 report was an aberration. A strong quarter would alleviate some of the fear of a rapid decline in HCV revenue. 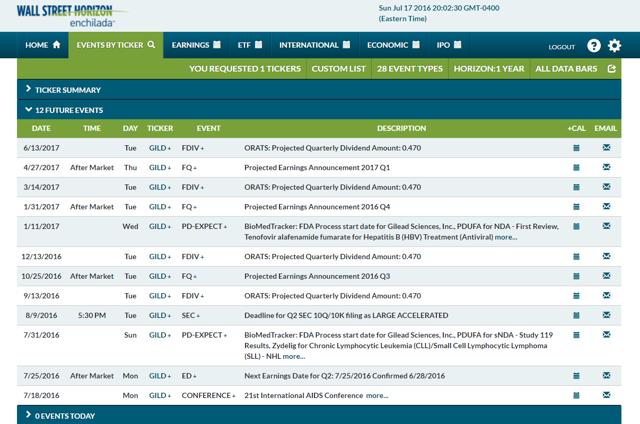 Powered by the strength of its HCV franchise, coupled with the consistency of its HIV franchise, GILD generated over $18 billion in net profit in 2015. It remains my firm belief the HCV franchise is quite durable with a lifetime sales estimate of $100 billion in sales. GILD remains committed to returning cash to shareholders in the form of share repurchases and dividends, similar to AMGN. While the promise of GILD clinical pipeline is open to debate (see recent work on NASH), the health and durability of its dividend is beyond reproach. Unlike AMGN, GILD does not face potential patent exclusivity loss on a primary product until 2021 at the earliest. As superbly covered by DoctoRx in a recent post, the current JAMA guidelines offer a natural path for GILD to extend their product portfolio with TAF-containing combos replacing older combos for existing or newly infected patients. 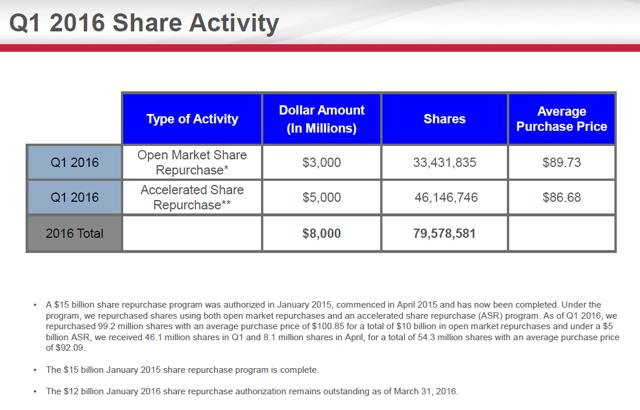 The second portion of GILD capital return plan revolves around an aggressive share repurchase plan similar to AMGN in the earlier part of this decade. GILD completed the $15 billion dollar share purchase plan and had commenced on a new $12 billion dollar authorization. Interestingly; the shares are trading in line with the amount of shares purchased via the accelerated share repurchase program. Hopefully, they will have taken advantage of the volatility in Q2 with additional timely purchases. 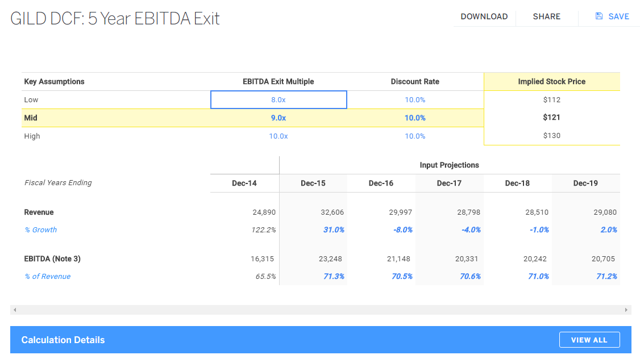 GILD remains a compelling choice for the dividend growth investor who seeks exposure to the biotech/pharma space. GILD dividend is in line with its chief rival AMGN, yet the capital return potential coupled with the likelihood of further compounds brought to market via internal discovery or acquisition trumps the profits that can be reasonably expected with AMGN. A similar higher-yielding opportunity has emerged in a well-established entity detailed in my report, "My top pick for 2017" available to subscribers of the Undervalued Gems Investment Service. GILD is not a high growth entity akin to REGN, instead, it should be viewed as cash flow machine with an embedded call option on its clinical pipeline. A hit in a similar field would erase the doubts pertaining to the sustainability of GILD revenue stream. GILD remains my favorite play for growth and income in the biotech space. I will post an updated fair value model after GILD reports earnings next week. I would like to thank you for reading and look forward to your comments.