The first quarter 2022 reporting season continues to be among the most volatile we have seen in many years. There have been massive post-earnings share price reactions from major stocks. Broad macro risks are making their way into the financial statements of both domestic and multinational firms. On conference calls, we hear about key issues like labor shortages (and rising wage costs), surging food and energy prices, lingering supply chain bottlenecks, and uncertainty in China. These topics affect all areas, but eyes remain on the Consumer Discretionary sector as $2 trillion of excess household savings is the war chest to battle recession risks. A scare hit in late April when the rate of GDP growth printed negative. A surge in U.S. imports caused an economic contraction for Q1 despite still-strong consumption.

Cracks in the Consumer?

While corporate earnings reports generally show that the consumer remains resilient, are some cracks forming? Just take a look at what happened with Netflix (NFLX) - after another round of subscription price hikes, customers just said no. Subs were lost and the stock price cratered. Just last week, Etsy (ETSY) execs echoed that sentiment. For how long can folks keep doling out cash for conveniences and luxuries? We might get more information on that topic this week as Peloton (PTON), Wynn Resorts (WYNN), Disney (DIS), and Rivian (RIVN) are confirmed to issue earnings. Unfortunately, CFOs are increasingly steering away from providing forward-looking guidance estimates. 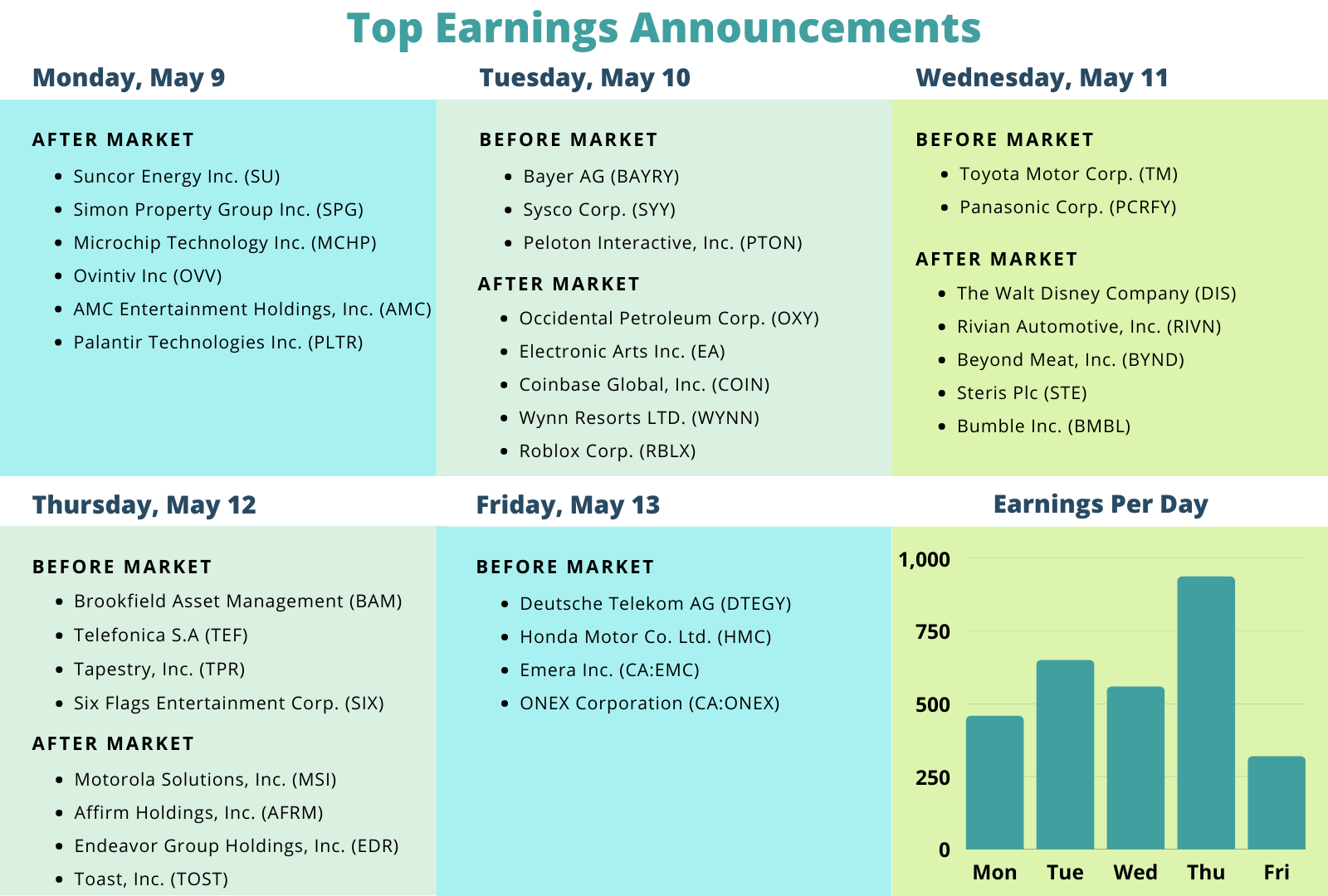 Out & About (At Whatever the Cost)

Looking back, Marriott (MAR) reported a stellar quarter last week as travel demand surged. We got hints of that trend in April from comments from the major airline CEOs. Despite the Omicron variant, individuals and families booked flights, hotels, and excursions. Now all eyes are on demand for business travel. Hilton (HLT) shares wobbled after its earnings release last week, but the hotel’s CEO said business travel would return to pre-pandemic levels by year-end. Finally, Airbnb (ABNB) reported a small quarterly loss last Tuesday afternoon, but shares recovered by late in the week. Looking ahead, Six Flags (SIX) reports Thursday morning after its shareholder meeting on Wednesday.

Aside from travel and the consumer, growth stocks in the Information Technology sector will be in focus. Expect volatility.

Palantir, a $21 billion market cap emerging commercial data integration and software solution company, reports Monday before the opening bell with a conference call to follow. Like so many once-sexy growth stocks, PLTR has negative earnings per share over the last 12 months and does not pay a dividend. Shares have slumped more than 60% from the peak reached last September. Traders expect high volatility following Monday’s results. The current at-the-money straddle costs $1.47, more than 13% of the stock price. PLTR reports Q1 results Monday before market open. 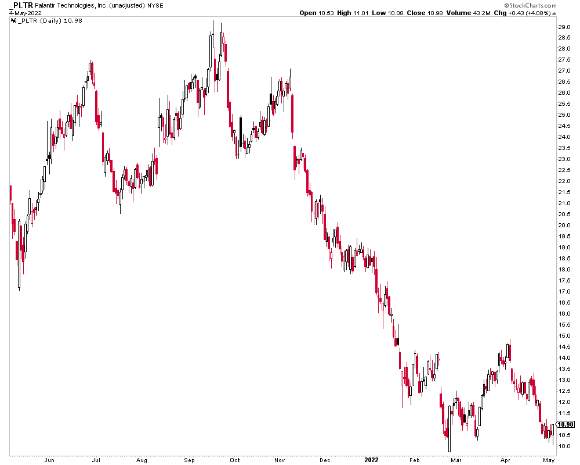 Fasten your seatbelts for Rivian’s earnings this Wednesday AMC. Shares in the EV automaker have crashed since its IPO last November. The stock initially rose big from a $78 offering price, catapulting to nearly $180 during its fifth day of trading, but then investors quickly turned sour on nearly all growth names. The Fed’s more hawkish turn on interest rates late last year led to a massive dump of high-duration stocks like Rivian. After an 80% decline, investors are left wondering where the bottom will be. We might get clues this Wednesday. Perhaps some selling pressure could be relieved now that the IPO lock-up period (ending on Sunday, May 8) has come and gone.

The Consumer Discretionary stock has been in the news recently as President Biden seeks to speed up funding for U.S.-made lithium-ion batteries – a key input for electric vehicles. Amid the ongoing Russia/Ukraine conflict, there has been a pronounced move away from dependence on Russia’s commodities. It’s all an effort to speed up the supply chain. 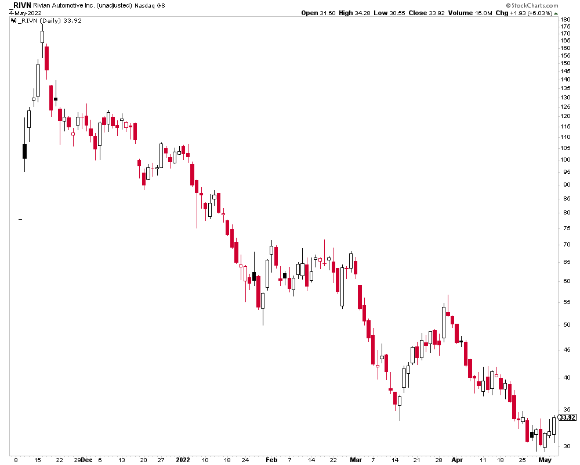 One of the largest companies in the Communications Services sector reports Q2 earnings this Wednesday AMC. Amid much hoopla and battles with Gov. DeSantis of Florida, push comes to shove mid-week with respect to actual financial figures. Analysts expect strong profits, near $1.19 per share, which would be better than 50% growth from the same quarter a year ago.

Recall last quarter when the $207 billion market cap firm beat the street’s profit estimates. DIS added nearly 12 million Disney+ subscribers while its parks, experiences, and consumer products division doubled revenue growth from a year earlier. But after the Netflix flop this earnings season, investors are nervous. Disney shares are off more than 25% so far in 2022, making it among the worst performers on the Dow. Given the dramatic drop, expectations are likely quite tempered, much like they were for Meta Platforms (FB) earlier this reporting season. 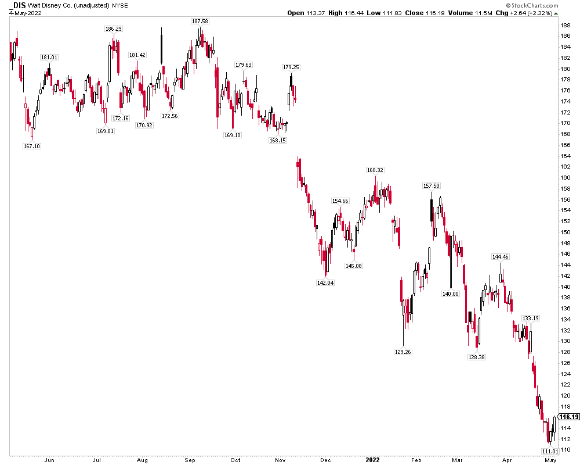 This week is the final peak week of the season with over 4,000 companies expected to report. At this point, 81% of companies have confirmed their earnings date (out of our universe of 10,000 global names). 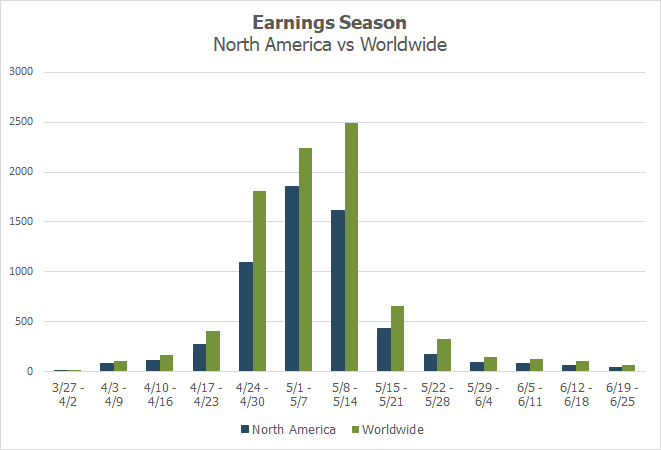 While the bulk of S&P 500 earnings are in the rearview mirror, many small and mid-cap U.S. companies have yet to report. We are also in the peak period for foreign firms to issue results. Single-stock price reactions continue to be dramatic as uncertainty is high and the VIX remains elevated. While a litany of macro risks loom, company-specific corporate events like earnings reports and shareholder meetings impact stocks. Traders and portfolio managers must stay abreast of the latest key events in this rocky environment.