Ahead of the retail earnings parade this week, soaring inflation is top of mind for Wall Street and Main Street

Peak earnings season for the third quarter ended last week with mixed results. Despite wins from fintech names such as Sofi and Affirm, investors were more focused on big misses from Disney (which had its worst day since 2020 following the report) and others throughout the week such as TripAdvisor, DoorDash and Beyond Meat. With 91% of S&P 500 companies reporting, the earnings growth rate stands at 39.1% (unchanged from last week) and revenues at 17.5%. Q4 expectations continue to fall, with profit growth now expected at 20.9%.

However, it was a couple of economic indicators that more closely captured investor attention last week. The October Producer Price Index reported in-line with expectations with a 0.6% MoM increase, but wholesale prices jumped 8.6%, the fastest annual pace in 11 years. This had investors bracing for Wednesday’s Consumer Price Index reading, which turned out to be much worse than expected. CPI was up 6.2% vs. last October, the largest increase since 1990. The S&P 500 broke its 8 day winning streak and instead posted consecutive losses on Tuesday through Thursday of last week, only to bounce back in Friday’s session.

Inflation will Continue to be a Corporate Focus for Q4, and Strong Dollar Language Will Make its Entry into Reports

It’s not just the US that had concerning inflation readings last week. China’s National Bureau of Statistics reported PPI of 13.5% in October, the highest increase since the government started releasing this data in the mid-90s. CPI also rose to 1.5%, the highest rate since September 2020. These factors caused investors to question just how ‘transitory’ inflation really is, and caused the dollar, gold, crypto and treasury yields to spike.

While negative commentary regarding inflationary pressures was a constant in Q3 earnings releases, most commentary regarding foreign currency exchange was positive. Expect that to change in Q4 as the dollar soars, hitting $95.12 at Friday’s close, the highest reading since the summer of 2020. A strong dollar is bad for large cap companies in the S&P 500 that do a lot of business overseas because the profits they earn on international sales will decrease in value on their balance sheets. Typically the strong dollar is more beneficial for domestically focused businesses, but even they can be hurt as Americans have more purchasing power and may choose to buy goods from other countries.

What Will Retailers Have to Say This Week?

This week all eyes will turn to the retail sector for a glimpse into what to expect for the upcoming holiday season. In its holiday forecast for 2021, The National Retail Federation predicted a record holiday shopping season.

Despite supply chain strains, most retailers are in a good position heading into the holiday season, having invested heavily to be sure they have the right products to meet consumer demand. At the time of the NRF report, consumers were also in a better position, as wages continue to rise, prompting those polled by the NRF to say they would spend an average of $997.73 on gifts this season, on par with prior years. But now that we know inflation has essentially wiped out wage growth, how will consumers’ willingness to spend change as they shell out more money at the pump, grocery store and for rent?

Retailers to watch this week: 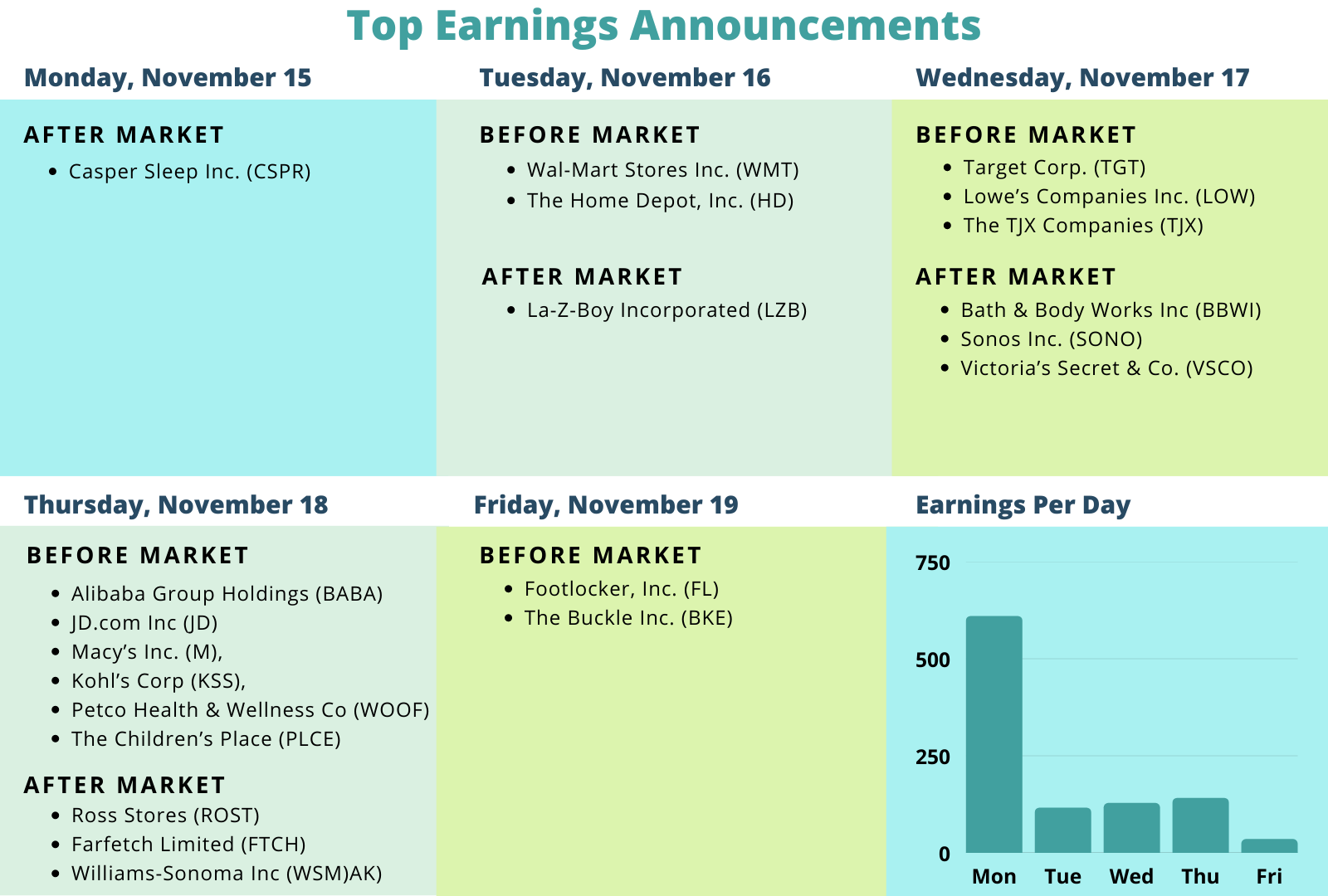 Alibaba has historically (over the last 5 years) reported fiscal Q2 results from November 1 - 5, so a report date of November 18 is much later than usual. Singles Day, the world’s largest annual shopping event, is held every year on November 11. While Alibaba did report another record Singles Day on Thursday, there were signs that growth is slowing. Gross merchandise volume (GMV) increased 8.5% from the year ago period, lower than analyst’s estimates and well below last year’s growth rate of 26%. It is perhaps details of this slowdown that incentivized Alibaba to push back its quarterly earnings date, as academic research shows that companies tend to delay earnings when they are preparing to share bad news with investors.

Peak earnings season is officially over, but company reports will continue to trickle in over the next several weeks. This week will see 1,030 companies from our universe of 9,500 report, mostly within the consumer discretionary sector. 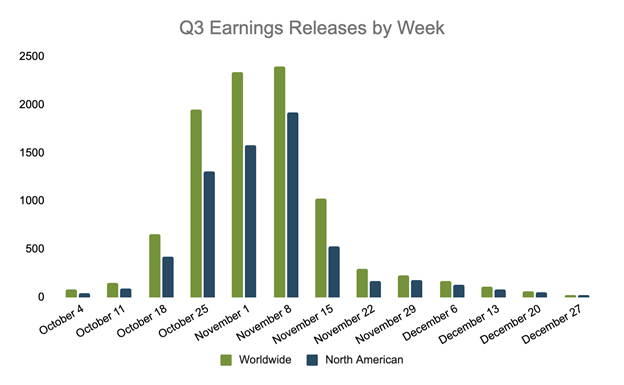