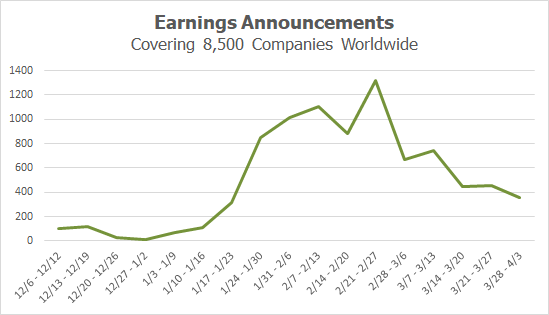 It used to be that post-Thanksgiving retail sales strength was tracked by foot traffic. Toss out the regular playbook this year, of course. Online shopping is paramount this holiday season. The National Retail Federation (NRF) reported that shoppers spent 14% less over the Thanksgiving holiday weekend versus a year ago despite online retailing spending rising 8% on Black Friday. The number of online shoppers exceeded 100 million the day after Thanksgiving for the first time, according to the NRF. Expect the trend of fewer in-store shoppers and more online retail spending through year-end. Consumer Discretionary companies need to have pivoted away from brick and mortar to online - it might be too late for those that have not.

Hope on the Horizon - Dividend Resumptions

Dividend changes are key signs of the underlying strength in the corporate world. Firms cut and even suspend dividends during distressful times and increase dividends during profitable periods. Dividend policy, particularly in the US, is a key signaling mechanism from a company’s management to shareholders – slashing the dividend is often seen as a last-ditch effort to shore up liquidity. There was a sharp increase in dividend cuts earlier this year, but conditions are improving. We see that in our data. This week’s upcoming dividend suspends and resumes list features four stocks. Two of which are in the closely watched Consumer Discretionary sector.

American Eagle Outfitters, Inc (AEO) has rallied nearly 40% this year. That’s impressive on its own, but the stock was down more than 50% from its February peak to the April low. What a comeback it has been for this retailer. AEO suspended its second quarter dividend on June 3 following awful revenue figures from the first quarter. Sales have gradually improved in the last two quarters and it appears AEO’s online presence could bolster profits during the holiday period. The firm will host an Investor Day on January 21 that traders should monitor for important updates regarding Q4 shopping figures.

Next up is TJX (TJX), the largest off-price retailer in the world. Shares of TJX dropped 40% from the February high to its March nadir. The stock turned positive for the year during November following a strong earnings report. Wall Street Horizon’s data noted a resumption of the company’s dividend on December 8. The firm surprised investors earlier this year by announcing it would halt share buybacks and likely suspend dividend payments. Like AEO, retailers have turned it around thanks to the strength of the US consumer.

Indications are 2021 will be a year of improvement for global retail. Consumers are chomping at the bit to return to normalcy – we’ve all heard the term ‘pandemic fatigue’ by now. That concept will likely reveal itself during the middle of 2021 once a vaccine is widely distributed. Online shopping is probably here to stay, however. A silver lining of the pandemic is how quickly corporate managers have pivoted to the new environment. It’s as if a decade’s worth of retail shopping evolution took place in a few months. It is a sign that better times are ahead when Consumer Discretionary companies resume dividend payments.

Credit Suisse Group AG (CS) hosts Credit Suisse Group Investor Day 2020 on Tuesday, December 15. The meeting comes at an important juncture for the multinational bank. The outgoing Lloyd’s Bank CEO Antonio Horta-Osorio will be the new Chief Executive of the Swiss-based investment and private bank. Like many banks, CS is trying to grow its wealth management division. Private wealth management tends to provide more stable profits and less onerous regulation than other investment banking activities following the passage of Dodd-Frank in the US and EMIR reporting requirements in Europe (among other regulatory measures enacted over the last 15 years). The major global financial firm is also hampered by a litany of controversial events over the last few years that have resulted in the stock underperforming many of its peers since early 2018. Traders should monitor news about the incoming CEO and how private wealth management growth is evolving at Tuesday’s Investor Day.