A Santa Claus Rally in Buybacks? A Record Year Shaping Up.

If in doubt, authorize a share repurchase program. That has been a mantra this earnings season as results come in mixed. The beat rate has been decent thus far, but third-quarter earnings estimates have come down significantly from where they were on June 30 and even as recently as the end of September. FactSet notes that the EPS growth rate at end of Q2 was 9.8% for this reporting period. Today, though, the blended aggregate profit growth rate looks to be in the low single digits using actual numbers reported and estimated per-share profits to come. No surprise, there has been a slew of bearish pre-announcements over the last several months as firms attempted to temper expectations.

Guidance and Repurchase Authorizations in Focus

Earnings are not the only story. Forward-looking guidance is a key determinant of where a stock moves immediately after numbers hit cross the wires. One key corporate action that often excites the bulls is a stock buyback authorization. Of course, the move does not bind the firm to actually follow through on repurchasing shares, and some critics might argue that the initiative might be used to mask a weak quarter. It’s part of the earnings game each quarter that causes volatility on Wall Street.

There is no shortage of opinions on stock repurchases right now. Consider that 2022 has been a year of generally bearish price action, thus firms that engaged in significant buyback programs in 2021 suddenly look foolish. Example A is Meta Platforms (META). In the 12 months that ended June 2022, the Communication Services company repurchased a whopping $33.6 billion of common equity at an average price of $342, according to Barron's. The company led by Mark Zuckerberg continued scooping up shares through the first half of this year. With a stock price now near $100, that was an expensive program.

Traders are also keeping close tabs on the so-called “buyback blackout period” which is said to take place from just before the end of a reporting period through the two days after it releases quarterly results. So, there’s thought to be a natural demand for shares that returns in late October, in the case of the Q3 reporting season, and extends into early November. That just so happens to correspond to bullish seasonal trends that ensue during the back half of October.

Giving this period’s buyback blackout window more notoriety is that upcoming corporate repurchase authorizations increases the likelihood for an all-time high annual buyback figure near $1 trillion, beating 2021’s high just above $900 billion. Wall Street Horizon’s data found that there was indeed a jump in authorizations in 2021. Those programs commonly extended several quarters, so authorizations launched last year impacted share counts in 2022. Perhaps executives will look like heroes for repurchasing equity at depressed prices in 2022, but an extended bear market could once again cast an ominous shadow on this type of use of corporate cash. 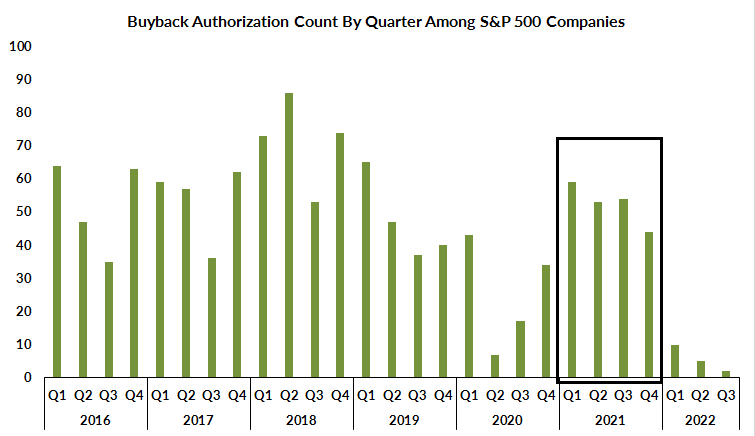 Moreover, it will cost companies just a bit more to engage in buybacks in 2023 following the passage of the Inflation Reduction Act earlier this year. The controversial piece of legislation included a 1% excise tax on stock repurchases, but the policy does not take effect until January. So, the logic goes that firms might pull forward buybacks into 2022 to avoid the modest penalty. Could that be a bullish catalyst heading into the usually-strong November-December period? Might it even set up the market for a super-Santa Claus Rally? Place your bets now.

As if there wasn’t enough going on with stock buybacks, CFOs now face a much different capital allocation situation from a year ago. Consider that the risk-free rate is no longer zero and the cost of debt for high-grade firms is near 6% - the highest since 2009. For companies with ratings below investment grade, the interest rate on new paper might be above 10%. Corporate finance 101 teaches that the weighted-average cost of capital is simply a blend of debt and equity (common and preferred). Buying back stock might effectively raise the debt financing component, which is not cheap anymore. 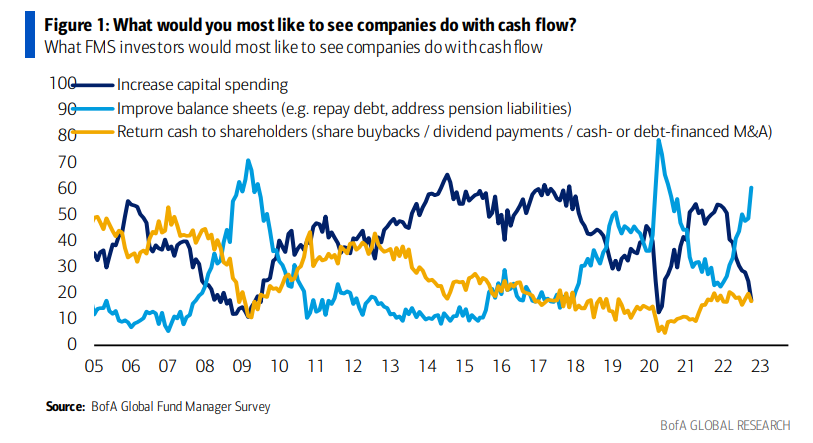 A share repurchase authorization within a quarterly earnings report is like a dessert after a big meal. The main course of top- and bottom-line numbers with a side of forward guidance capture much of the anticipation and attention, but this important corporate event can sometimes help drive a stock price higher. This year’s volatility and bearish price action make CFOs look like poor investors given the surge in buybacks in 2021. Companies that can weather the economic storm well, that are also repurchasing shares at low prices today, can come out winners in the eventual market recovery.