Third quarter 2022 earnings season kicks off on Friday with results from JPMorgan Chase (JPM), Morgan Stanley (MS), Citigroup (C) and Wells Fargo (WFC). While 2021 was marked by the highest earnings growth for US companies in a decade, 2022 continues to show a softening in profits as a result of both difficult year-over-year (YoY) comparisons and significant economic headwinds.

The blended EPS growth rate for companies in the S&P 500 currently stands at 2.4% YoY according to FactSet, which would be the lowest result since Q3 2020 posted negative growth of -5.7%. Analysts have started to temper back their expectations since the close of Q2, bringing the expected profit growth rate down 7.4 percentage points (estimated growth for Q3 was 9.8% on June 30). This is a reversal of the trends we saw in 2021 where there was upward momentum heading into each quarterly earnings season. Revenues are expected to come in at 8.5%, the first quarter of single digit growth after six consecutive quarters of double digit sales growth.

Energy is expected to be the largest contributor to EPS growth in the third quarter. Excluding that sector, the blended growth rate falls significantly to -6.0%. (Data from FactSet)

These expectations reflect difficult comparisons to last year, but also the negative impact that higher costs, a strong dollar, and waning consumer demand are having on corporation’s top and bottom lines.

While it is early in the earnings season with only 20 S&P 500 companies reporting results at this point, over half of those names have mentioned labor costs/shortages, supply chain disruptions/costs, and foreign exchange as having a negative impact on their results. These are not new concerns, but they have intensified since the beginning of the year, and have led to companies lowering 2H 2022 and CY 2023 guidance.

Inflation in the form of higher labor, material and freight costs is a double whammy for companies, not only impacting their bottom-line, but impacting the customers they serve who now might be holding back on spending.

Slowing consumer demand also exacerbates the issue of inventory oversupply that is the reality for many consumer retail and tech hardware companies. Supply chain disruptions caused by the COVID-19 pandemic led to a demand issue that companies over-corrected for, right at a time when consumer demand was slowly waning.

The strong dollar is also getting more air time this earnings season. The US dollar index has rallied nearly 20% YTD. Roughly 50% of S&P 500 revenues come from overseas. A strong dollar is bad for large cap companies in the S&P 500 that do a lot of business abroad because the profits they earn on international sales will decrease in value on their balance sheets. Typically the strong dollar is more beneficial for domestically focused businesses, but even they can be hurt as Americans have more purchasing power and may choose to buy goods from other countries.

The Conference board's latest reading on CEO confidence showed a fifth consecutive quarter of decline, now at 34 down from 42 in Q2. This is the lowest level since the midst of the pandemic lockdowns in 2020 (a reading below 50 reflects more negative than positive responses).

Beyond that, we’re already starting to see a surge in reduced or tepid guidance from large caps that have already reported, such as FedEx (FDX), Nike (NKE), Nvidia (NVDA), Ford Motor (F), Micron (MU) and others.

In addition to these outward signals of declining confidence, we track two non-verbal cues that corporations give:

The LERI (Late Earnings Report Indicator) encapsulates this sentiment. It looks at the number of outlier earnings date confirmations and whether companies are confirming earnings dates that are later than they have historically reported, or earlier. A reading above 100 reflects that companies are confirming later earnings announcements and below this average indicates companies are confirming dates that are earlier. Thus far we see a LERI of 84 for the Q3 season, lower than last quarter’s reading at this point in time, but higher than what we saw for the first quarter earnings season. This suggests that the downward trend in corporate confidence is still in play, although this early reading is a little better than initially expected. Note that as the season officially gets going, and more companies confirm earnings dates, we tend to see the LERI rise. 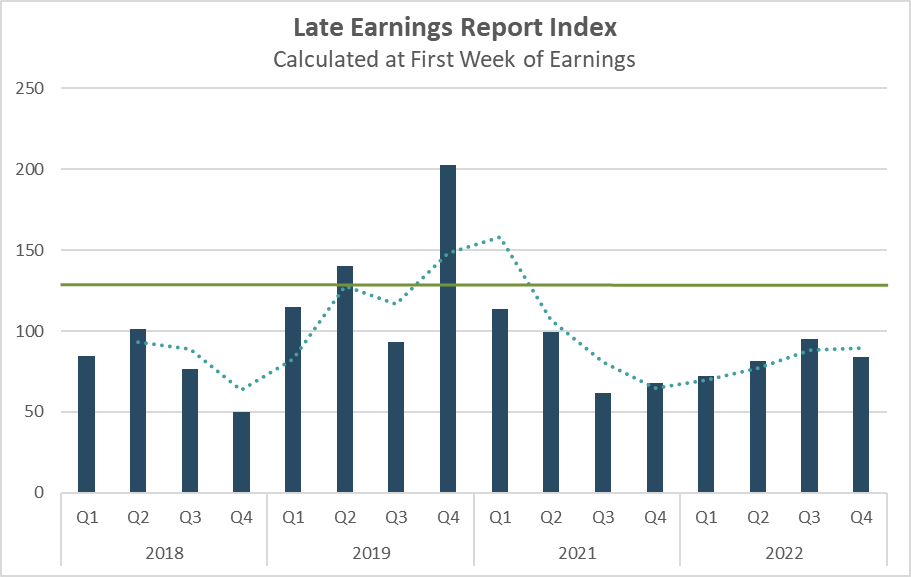 We’re also seeing a lower number of companies confirming earnings dates at this point, a total of 893 companies have confirmed (as of Wednesday) vs. last quarter’s total of 994 (on July 14). Big names like eBay, Ulta Beauty, AvalonBay Communities, Cincinnati Financial and Becton, Dickinson and Company have yet to confirm their Q3 earnings date. Confirming later than usual is consistent with uncertainty and poor guidance to come.

Financials are expected to be the second biggest laggard when it comes to Q2 earnings growth (-13.6%), and revenue growth (2.8%) and are the largest contributor to decelerating growth in the past week. (Data from FactSet)

The sub-sectors that are the biggest contributors to decelerating growth are consumer finance (-22%), capital markets (-21%) and banks (-13%) (Factset). Consumer related industries continue to take a hit as spending slows due to inflation and recession fears.

Banks have a number of weak spots this earnings season. Those with a large mortgage lending concentration such as WFC and JPM will suffer as originations and margins are under pressure and lending has cooled after a stellar two years. Almost any indicator you look at points to a troubled housing market:  mortgage rates are up to 7% according to the Mortgage Bankers’ Association (the highest since the early 2000s), mortgage applications are down to their lowest level in 25 years, existing home sales and pending home sales slipped in August, all while home prices stay relatively high.

Those banks with a large portion of revenues coming from investment banking activities will have to deal with the current slowdown in IPO and M&A activity. Extreme market volatility and rising rates have caused many companies to table their plans to IPO in 2022. Excluding SPACs, IPO proceeds YTD have only reached $9.4B, down from $200B in the year ago period (Bloomberg data). M&A has also taken a hit, with the combined value of global M&A deals for the first 3 quarters of the year only reaching $2.81T vs. $4.2T in the same period last year, according to Refinitiv.

Higher loan loss provisions, the money set aside to help protect against potential losses from bad loans, are also a concern going into bank earnings. In 2021 banks benefited from releasing those reserves which were built up in 2020 during the COVID-19 pandemic. Now, according to the Financial Times, the six largest banks are estimated to set aside $4.5B this quarter to protect from possible defaults.

One potentially bright spot for banks has been net interest income which benefits from a higher interest rate environment. But while higher rates are good for interest income, if they get too high and infringe on economic growth that begins to offset any benefit and becomes problematic for bank growth. Not to mention this won’t be enough to offset weaknesses in other areas. This season peak weeks will fall between October 24 - November 11, with November 3 predicted to be the most active day with 1,023 companies anticipated to report. Only 40% of companies have confirmed at this point (out of our universe of 10,000 global names), so this is subject to change. The remaining dates are estimated based on historical reporting data. 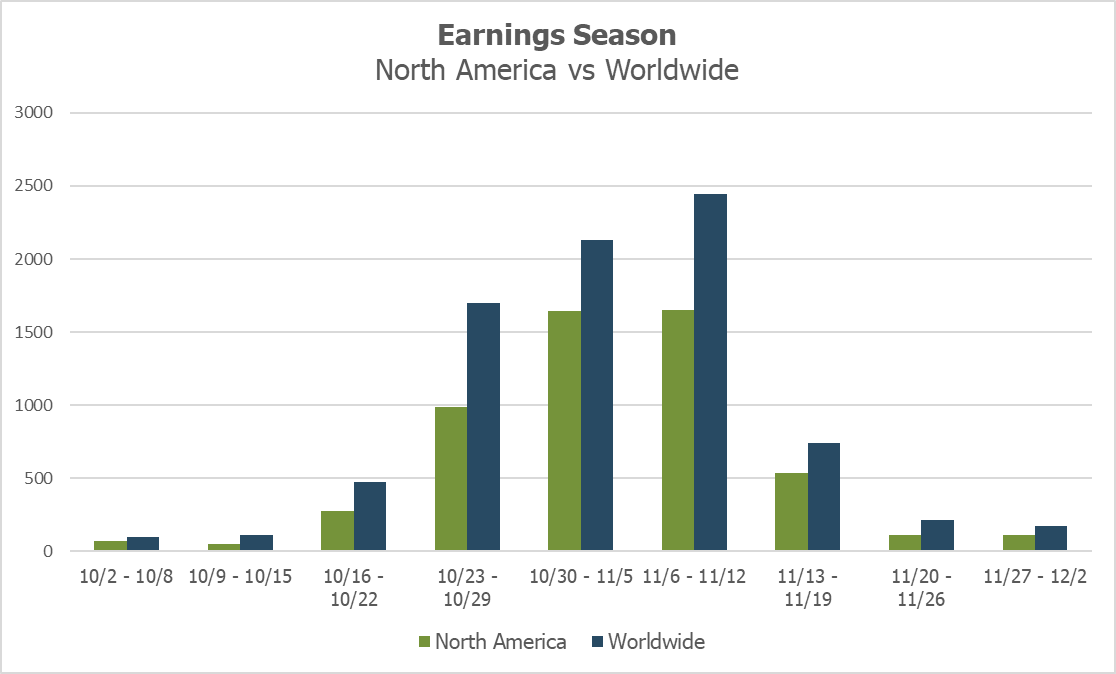