What’s the state of the consumer? Struggling amid still-high inflation and dwindling pandemic-related excess savings? Thriving in a bountiful jobs market that features improving real wages and the lowest unemployment rate since 1969? It seems there’s data to go either way at this point as recession fears ease. Both the December payrolls report and CPI reading suggest that a goldilocks economic outcome might not be so far-fetched. Of course, the x-factor is Chair Powell and the rest of the Federal Reserve.

Other hopeful signs are out there, too. Lower commodity prices, benign credit spreads, and a tick down in interest rates help to loosen financial conditions. The flip side is that scenario works to the detriment of the Fed’s mission to squash inflation sooner rather than later. We’ll know much more over the coming weeks as major U.S. and global corporations report Q4 results.

But some clues have already been left by major firms issuing preliminary earnings and sales numbers – some good, some quite cautionary. Let’s dig into a few key pre-announcements [sourced by Wall Street Horizon] and what they might mean for equities as we embark on an uncertain 2023.

Soft Landing? How About a Bullish Takeoff in Airlines Stocks?

One of the major preliminary earnings reporters to cap off 2022 was a bellwether transports industry company within the Industrials sector. Delta Airlines (DAL) held an investor day back in mid-December, and at the event, the management team voiced optimism regarding its 2023 and 2024 free cash flow generation outlook. Consumers, while strained by some metrics, still want to travel while business travelers return to the skies for corporate gatherings.

On Friday, January 13, Delta reported better-than-expected top and bottom-line numbers, but shares traded lower initially due to reduced Q1 2023 EPS guidance. Still, the CEO said that $5 to $6 of per-share profits could be in the works this year due to solid revenue growth and costs that are in check.

Looking ahead, Delta’s management team is scheduled to speak at the Airfinance Journal Dublin 2023 conference on January 17 and 18, so be on guard for potential stock volatility then. 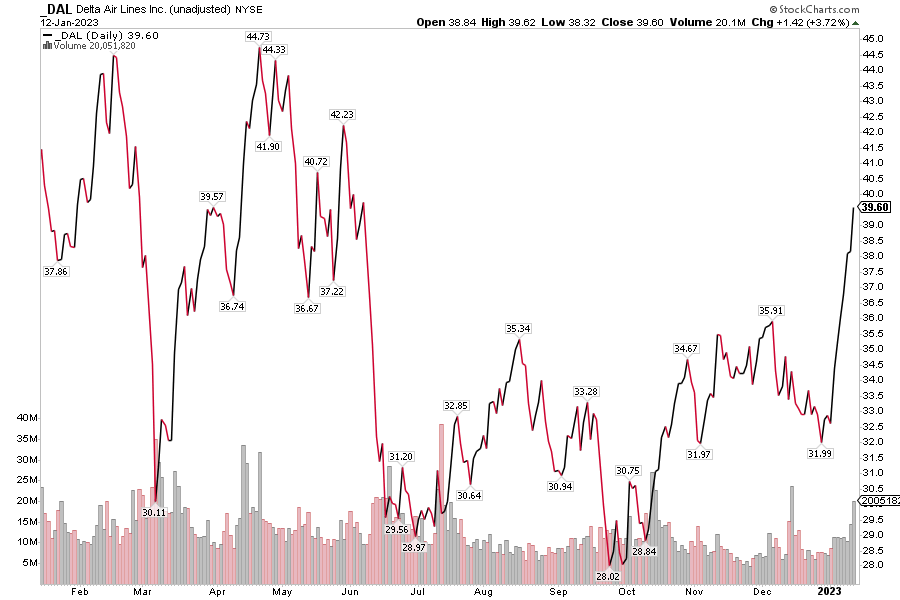 Also, American Airlines (AAL) took flight last week after it upped Q4 revenue and profit forecasts along with raising its margin expectation. Keep your eye on AAL later this month when it reports on January 26.

The bears still have plenty of arrows in their collective quivers. One is a downbeat outlook from prominent retailer Macy’s (M). The $6.2 billion market cap department store firm in the Consumer Discretionary sector updated Wall Street to what it expects for fourth quarter sales and profit results. Revenue is now seen in the $8.16B - $8.40B range versus an $8.3B street forecast. EPS is expected to be in the $1.47 - $1.67 range compared to the $1.61 consensus.

That preliminary figure implies a considerable yearly revenue decline during the most important period on the calendar for a retailer. We won’t know the final results until Tuesday, March 7 BMO when it’s slated to release both same-store sales and Q4 full earnings results. Macy’s preliminary earnings announcement goes in the ‘not so hot’ bag.

Macy’s: Shares Struggle in December, But Bounce Back in the New Year 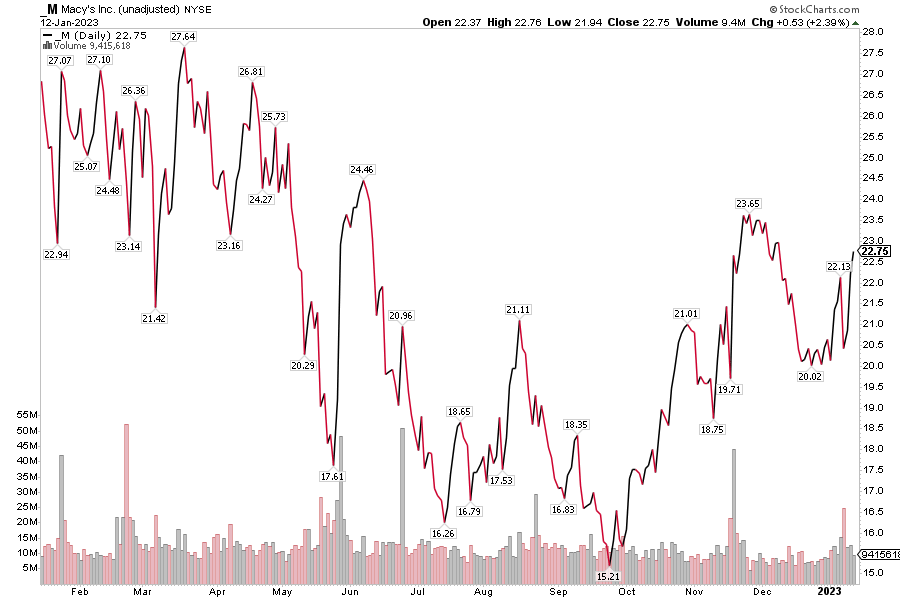 Finally, let’s home in on another cyclical company with less exposure to the end consumer. Nucor (NUE) is a steel and steel products manufacturer with sales in the U.S., Canada, and Mexico. The $40 billion market cap Materials sector company has been a big winner for investors in the last year. While the S&P 500 is down about 15% from 12 months ago, this Charlotte-based steel industry stock has surged almost 40%.

Wall Street Horizon’s data tracking shows a confirmed preliminary earnings event back on December 15. Amid macro uncertainty and CEOs’ continued dismal view of the global economy, the steelmaker voiced to the street that it still expects positive full-year 2022 bottom-line numbers compared to the total from 2021. NUE shares wavered in the weeks following the news, but then rose to fresh 8-month highs by mid-January. The actual Q4 reporting date comes on January 26, so don’t let this one get lost in the shuffle during that busy week of earnings releases. 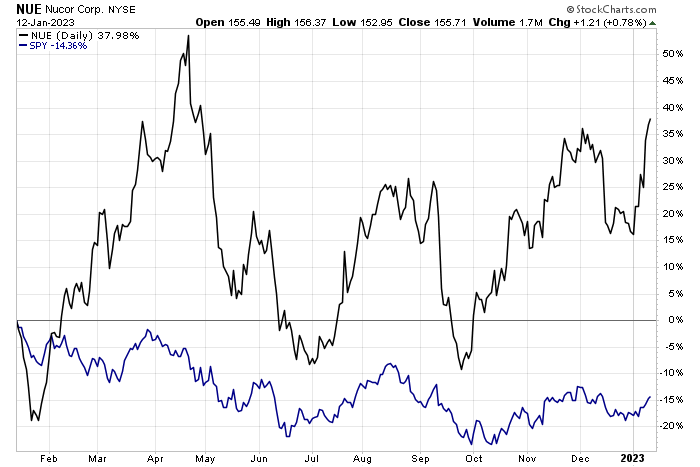 First-half recession or goldilocks? It seems investors are slowly gravitating to one side. Of course, we will probably end up somewhere in between. With a hefty number of firms issuing preliminary sales and profit outlooks, the corporate world is trying to signal certain messages to investors. It’s clear that some parts of the economy remain in a boom while others are encountering much tougher comps from late-2021’s unusual time of stimulus and super-low interest rates. So far, traders are generally looking past the bad news.

Stay tuned to our earnings season coverage at Wall Street Horizon. You can keep ahead of market-moving volatility catalysts with our industry-leading corporate event data that helps traders identify key dates so that they can effectively manage risk.