Why Investors and Traders Need to Track PDUFA Dates

In December 2017, the FDA broke a recent record for the most new drug approvals in a year with 46 approvals. Note that there were 22 approvals in 2016.

Prior to the 1992 PDUFA law, the drug manufacturers, the FDA and the public were all in agreement that the drug approval process was taking too long.  At the time, the typical approval process was about 30 months.  The FDA needed more people and money to speed up the process, but Congress was unwilling to fund the FDA's request for more resources and the drug manufacturers were unwilling to pay to have their drugs approved as they feared that their money would not speed up the process.

In 1992, the PDUFA law allowing the FDA to collect fees from drug manufacturers passed when;

a) the FDA and drug manufacturers agreed to set target completion times for drug reviews and
b) the FDA and Congress promised that these fees would supplement federal appropriations and not replace them.

Today, at a high level, here is how the process works:

PD End - Date the FDA responds to the drug manufacturer.

Company: Headquartered in Denmark, Novo Nordisk is a global healthcare company with more than 90 years of innovation and leadership in diabetes care. 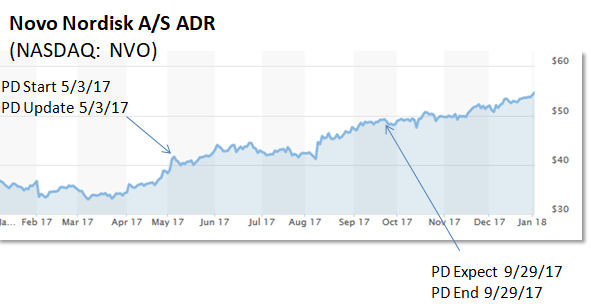 Result:  You can see the stock experienced a slight increase after the FDA approval start date in early May.  Subsequently the stock continued a steady increase of 17% between the start and end of the approval process.

What is the Value of These Dates to Investors and Traders?

The value for an investor or trader in some cases is dramatic or many times you may see a steady increase in a stock price leading up to a FDA decision when consensus is that an approval is imminent (such as in the above example).  In addition, if it's a very large drug manufacturer and the drug up for approval does not have significant market potential, the impact of the FDA's decision may be small as well.

No matter the situation however, the expected date for an FDA approval, or non-approval, of a drug is a significant corporate event that should be known and observed if you want to make informed investment and/or trading decisions in biotech. Additionally, knowing the PDUFA dates along with the company’s other corporate events can greatly assist in forecasting upcoming volatility in a company’s stock or options.