President Biden announced plans for a broad infrastructure investment package late last month. The $2+ trillion proposal could benefit a variety of sectors; not just the ones that immediately come to mind. The details remain sketchy at this time, but investors should expect a tremendous boost to U.S. GDP due to increased government spending.

A bevy of industries look to get a piece of the infrastructure pie. Municipal roads and bridges will surely get some attention, but so too will areas like electric vehicles and perhaps an upgrade to the nation’s cybersecurity defense arena. We profile CACI International (CACI) in this week’s report. CACI has direct exposure to that niche of the defense industry.

The package should implore companies to invest in capital expenditures. Capex was essentially put on hold during the height of the pandemic. A year ago, investors preferred that companies shore up their balance sheets to weather the COVID storm before taking risks on future projects. The latest Bank of America Global Research Fund Manager Survey in Figure 1 below indicates that money managers feel more confident about the markets and economy today, so they now prefer more capital spending activity.

Putting it all together, significant government spending and increasing corporate cash deployment into long-term projects will undoubtedly spur tremendous U.S. economic activity in 2021. 7%+ U.S. real GDP growth this year will also benefit the global economy, though world GDP will have some catch-up to do in the coming years to match the U.S. recovery.

What would you most like to see companies do with cash flow? 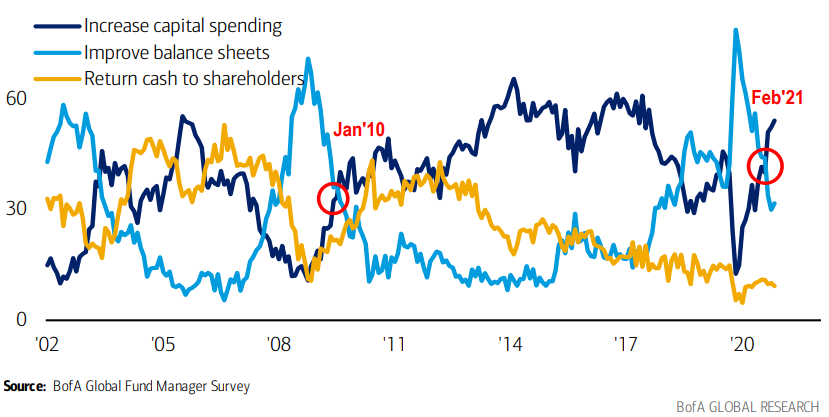 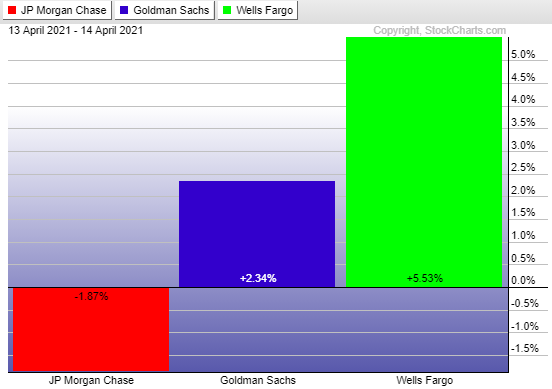 Two companies stood out to us this week with large earnings date change Z-scores.

CACI International (CACI) is listed on the Russell 1000 index. CACI is an information domain expertise, solutions, and service provider in the Information Technology sector. We profiled IQVIA Holdings, Inc. in last week’s Event Data Outlook, and CACI is another cybersecurity player that appeared on our radar as an earnings outlier. CACI, however, has a niche in innovating technologies for the Department of Defense in the U.S., among other national security agencies. At the firm-specific levels, CACI recently announced a $500 million accelerated share repurchase program to be completed by the end of the year. More broadly, heavy government spending associated with the upcoming infrastructure bill could benefit CACI. In the near term, traders should be on guard for unusual earnings.

Plus Therapeutics (PSTV) is a microcap biotechnology company in the Health Care sector. The $19 million market cap pharmaceutical firm is engaged in developing, manufacturing, and commercializing treatments for cancer patients. Its headline drug candidate is Rhenium NanoLiposomes. On March 23**, the Texas-based biotech announced that it entered a master services agreement (MSA) with Piramal Pharma Solutions for the development, manufacture, and supply of the drug. Share volume surged, and the stock price spiked to near $3.50 on the news. Gains were given back, however, and today PSTV trades near $2. It has been a wild ride for those trading PSTV in 2021. The year's high was above $5 intraday on February 10 before the stock was cut in half by March 4. Expect more volatility around earnings which will arrive much earlier than usual. 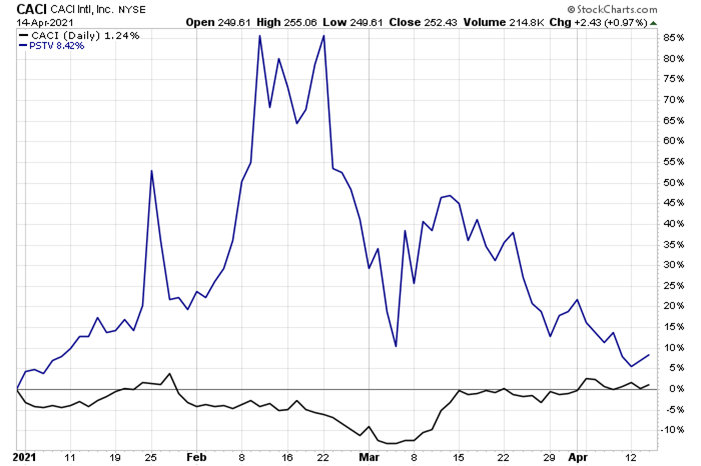 All eyes are on global earnings as the corporate world emerges from the pandemic. Base effects will be substantial this reporting season and next as many firms experienced sharp losses due to the steep decline in economic activity a year ago. Investors must pick up on clues from executives and corporate body language to gain an edge as the year progresses. Many macro factors influence decision-making – the major U.S. infrastructure bill and continued restrictions in Europe make for an uncertain environment. Investors need to keep monitoring trends in corporate event activity to stay ahead of the street.