Corporate ‘Body Language’ and How to Capitalize on It 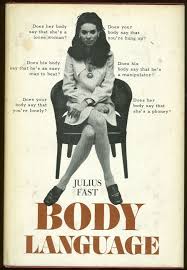 We all know what body language is. The classic book Body Language by Julius Fast popularized the topic in 1970 and it has since sold over three million copies.

We all use non-verbal forms of communication with our posture, gestures and facial expressions. Sometimes it’s used consciously and purposefully, such as when a detective interrogates a suspect.  But most often, it’s done subconsciously, like when a hiring manager is assessing a job candidate.

Although body language is a non verbal form of communication, it still involves two parties. Both sides are trying to get a read of the other’s thinking by reading their body and facial cues.

Another characteristic of body language is its speed; people can read and react to these signals rapidly. Just how quickly was shown in one study of criminal behavior (Grayson and Stein, 1981). In it, prison inmates were shown videos of random people and asked to rate them as potential victims. The criminals took just seconds to decide who they would target.

Body language also tends to be consistently received. In the above study for example, all the convicts chose the exact same people as the best victims. And they didn’t just choose the old and weak. It was people’s body language that made them likely targets.

Body Language in a Corporate Parallel

Companies use ‘verbal’ communication all the time to provide information to various audiences and constituencies. It’s everything they say publicly, including quotes in their press releases, what their executives say on investor conference calls, what gets communicated internally to employees and what the CEO says in the annual letter to shareholders.

What you may not realize, or at least under-appreciate, is that companies also give signals that are remarkably similar to human body language. Just like the human version, these messages come from what companies do rather than what they say.

These unspoken cues often provide the earliest indications that something really good or really bad is about to happen in a company. The most common examples include earnings and dividend dates that are moved up or pushed back, stock split timing changes, and sudden changes in participation in conferences.  That is, are they attending more or fewer investor conferences?

For those who know what to look for, how to interpret these signals, and are able to act on them, these unspoken cues can reveal sources of alpha that others don’t see. That valuable market intelligence can inform strategies and create openings to capitalize on opportunities or sidestep risks.

The key is knowing what to look for and seeing it before your competitors do.

Here at Wall Street Horizon, we are corporate surveillance (corporate body language) experts. We’re not concerned with what companies say. There are lots of vendors and pundits who analyze all that. We are, however, obsessively focused on what companies do. More specifically, we scrutinize what more than 6,000 publicly traded companies do across more than 40 types of corporate events.

For people and companies alike, actions speak louder than words. Watching company actions through their corporate event activities can provide a clearer picture of the company’s health.  Recognizing this allows you to take decisive action before the rest of the market.

You just need to be able to read the corporate body language.