Despite some headline misses in big tech, markets ended the week with a significant rally and the Dow realized its fourth consecutive winning week.

Heading into Q3 earnings season analysts significantly lowered the bar to adjust for headwinds from inflation to the strong dollar, and a majority of S&P 500 companies have surpassed those EPS estimates (71%), although less than the 5-year average. According to FactSet the market is rewarding positive earnings surprises more than they are punishing negative earnings surprises.

While the mega-cap misses from Alphabet (GOOGL), Microsoft (MSFT), Meta Platforms (META) and Amazon (AMZN) have been front page news as well as their plunging stock prices, many other well-known names were able to miss expectations and bounce back. Take two Industrials for example, 3M (MMM) and Whirlpool (WHR). 3M missed revenue estimates when they reported before the open on October 25, but after a brief pre-market dip closed the week up 7%. On October 20, Whirlpool missed significantly on the top and bottom-line, by 7% and 16%, respectively.  They ended last week up 5% from that initial post-earnings collapse.

Overall S&P 500 EPS growth for Q3 continued to increase to 2.2%, this is still the lowest rate since Q3 2020, but an improvement over last week’s 1.5% as positive reports outweighed the negative. (Data from FactSet)

What will the Second Week of Peak Earnings Season Bring?

This week we get Q3 results from 167 S&P 500 companies from a smattering of sectors. One area that will be in focus is the travel names. We’ve already heard from the airlines, and despite inflation and recession fears, international carriers such as American Airlines and United Airlines said they anticipated no slowdown in the fall and holiday travel season. This bodes well for names such as Booking.com (BKNG), Norwegian Cruises (NCLH), Airbnb (ABNB), Royal Caribbean (RCL) and Marriott (MAR) which all report this week. 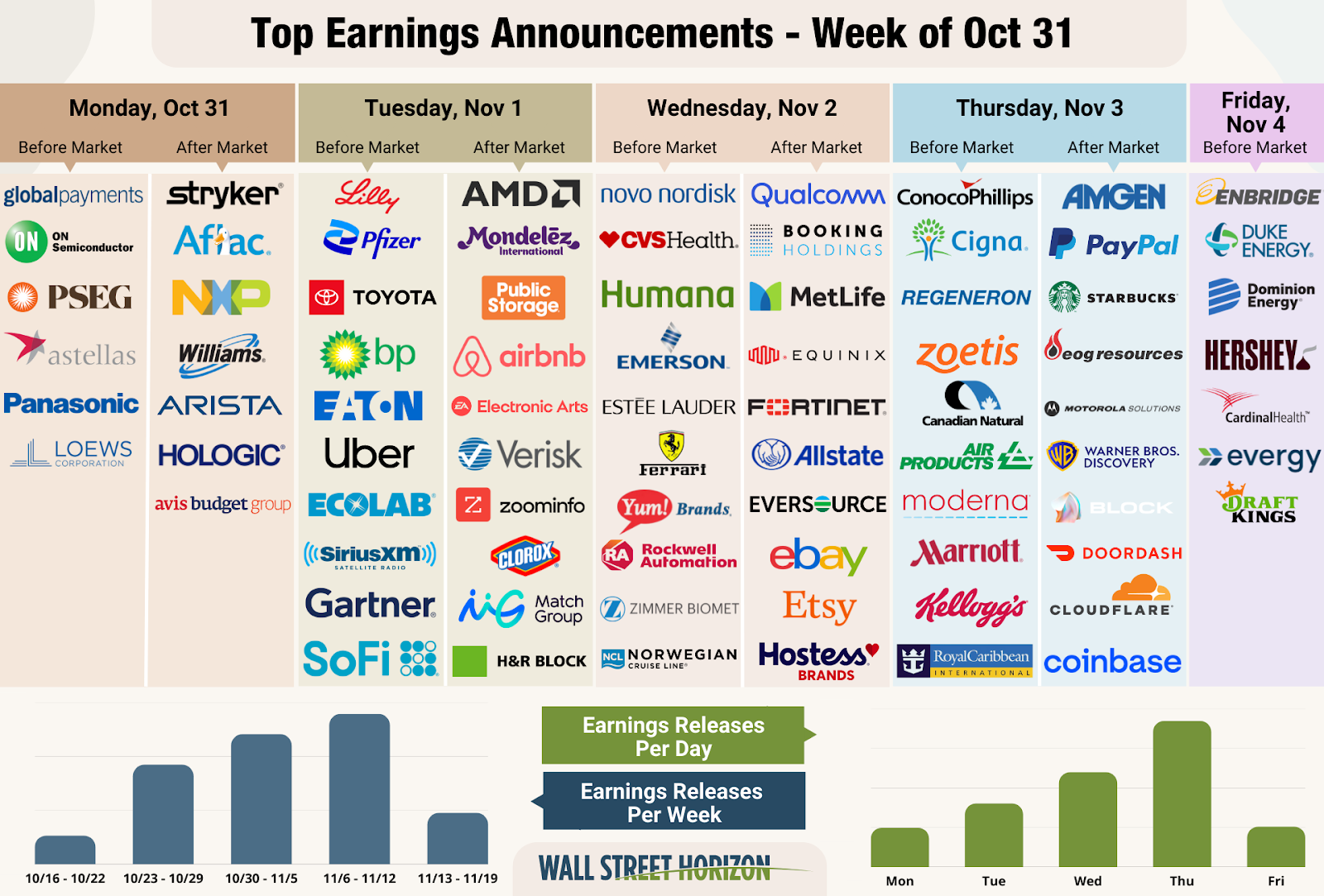 Potential Surprises in the Week Ahead

This week we get results from a number of large companies on major indexes that have pushed their Q3 earnings dates past their historical norms. Five companies within the S&P 500 confirmed outlier earnings dates for this week, three of which are later than usual and therefore have negative DateBreaks Factors*. Those three names are Advanced Micro Devices (AMD), AvalonBay Communities (AVB), and Celanese Corporation (CE). Sysco Corporation (SYY) and CenterPoint Energy (CNP) confirmed earlier than usual dates, as well as other notable names such as Toyota Motor (TM) and Hostess Brands (TWNK).

Allegiant typically reports Q3 results during the fourth week of October, and they have done so for the last 6 years. This is the first year since we began tracking Allegiant in 2013 that they will report Q3 results in November, potentially signaling bad news will be delivered on the upcoming call.

Despite generally upbeat results from the airlines this season due to a rebound in travel demand, Allegiant’s later than usual earnings date suggests it might be preparing to share bad news with investors when they report for Q3. Peers in the space such as United Airlines, American Airlines, Alaska Airlines and Southwest all beat expectations on the top and bottom-line, while Delta and Jetblue missed profit estimates, but beat sales expectations.

Similar to Allegiant, AvalonBay typically reports Q3 results during the fourth week of October, and they have done so for the last 9 years. This is the first year since we began tracking AVB in 2013 that they will report Q3 results in November. This is also the first time they are reporting on a Thursday, historically favoring a Monday or Wednesday report day.

Apartment real estate investment trusts (REITs) such as AvalonBay are still recovering from COVID fallout that included higher delinquency rates and no-eviction policies which increased non-collectible accounts. On their Q2 call AVB said it may still be another year until some of their markets catch up. Rising construction costs are also a headwind the REIT is up against, however with home prices being historically very high, purchasing a home is still out of reach for many which benefits rental buildings and makes it easier for them to raise rents.

This week is the second peak week of Q3 earnings season with 2,454 companies anticipated to report (out of our universe of 10,000 global names). November 3 is predicted to be the most active day with 935 companies scheduled to release results. Thus far 71% of companies have either confirmed their earnings date or reported already. 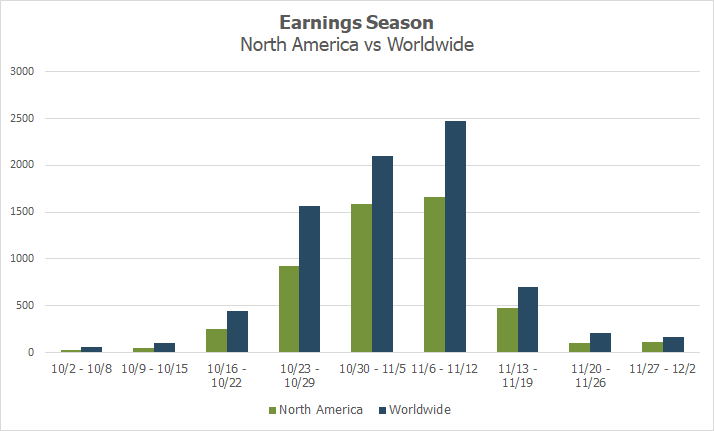