After a short squeeze frenzy, will earnings finally be in focus this week?

You may not know it due to the frenzy around GameStop, AMC Entertainment and other short squeeze trades, but last week was a big one for corporate earnings! For the first time in the 10+ years that I’ve been covering earnings seasons, the big tech reports were not center stage in the financial news circuit during their reporting week. This is even more surprising given the year many of these companies had, with Microsoft, Apple and Facebook all easily posting record revenues for Q4. These names are rarely ever secondary news, especially with results like these, yet here we are.

Last week’s stellar earnings only proliferated a trend we mentioned in our Q4 preview, a record number of S&P 500 companies are beating Wall Street estimates (82%), and that is pushing the overall growth rate higher. According to FactSet, year-over-year earnings growth for the index now stands at -2.3%, just half of the decline that was expected at the beginning of last week.

This week we’re gearing up for another heavy week of earnings, with 1,090 worldwide names reporting, and 691 in North America. 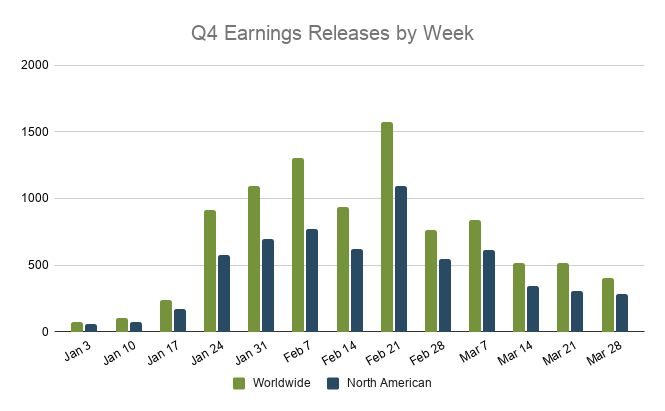 A fifth of companies are reporting 4+ days later than usual

Just looking at the most important companies (those on the F1000 and NASD100, SP500, and DOW 30 indexes), we see 70% have confirmed their earnings release dates for the quarter. While this is in line with the number of companies we’d usually see confirming report dates by peak season, one difference we’re noticing is the tendency to report later than in past quarters. Of the companies that have confirmed (or reported) earnings dates thus far, 20% are reporting 4 days or later than they did in Q4 2020. Why does this matter? Research shows postponing earnings announcements is often predictive of bad news ahead.

Financials and Real Estate postponing earnings releases the most

Of the companies that have confirmed report dates for the quarter, 95 confirmed with unusual date movements. The sector confirming most outside of their historical report date range is Industrials with 21 companies, although it is a near even split between whether those movements were postponements (usually negative) or advancements (usually positive) of earnings dates. Financials had the next largest amount of movements, although that sector tells a much different story with only 20% being deemed positive because they were moved forward and 80% being moved later. Similarly, the sector in third place, Real Estate, is also seeing 30% advancements vs 70% postponements. It should come as no surprise that many of those in the latter group are REITs. 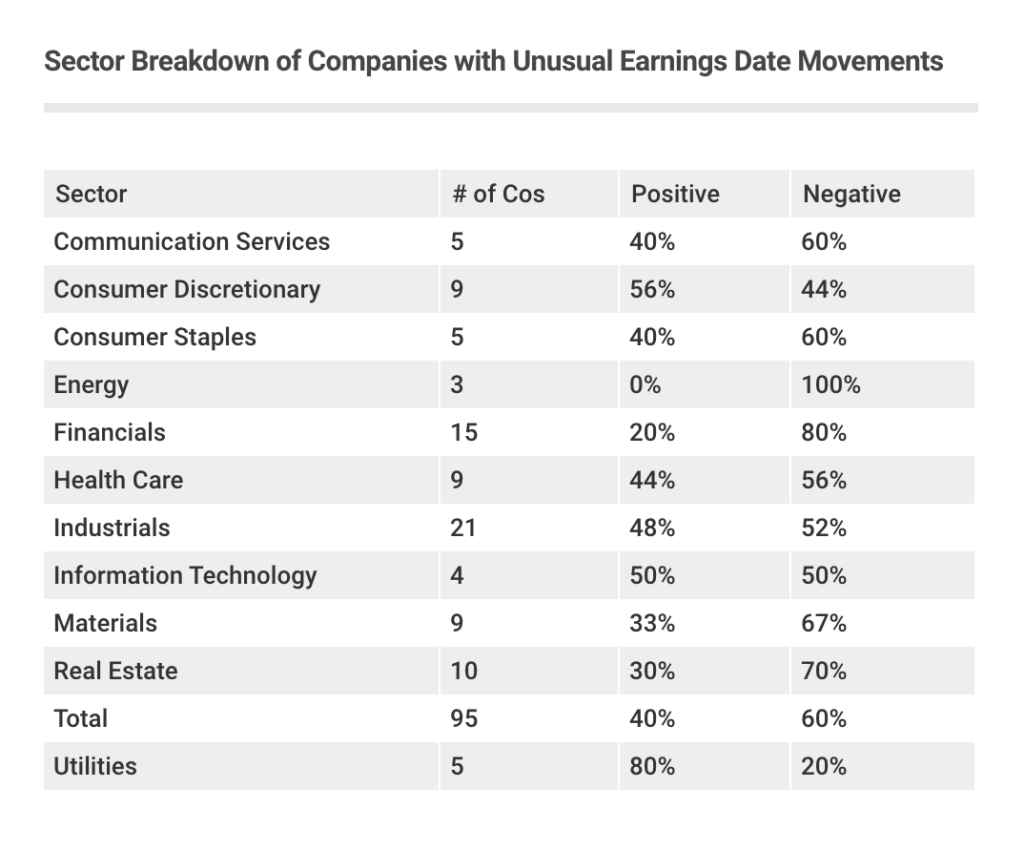 Harley Davidson has a tendency to report Q4 on the last Tuesday of January, and has done so for the last four years. This year, however, they have pushed that later to February 2. HOG has a DateBreaks Factor* of -3, meaning there is a high negative deviation from the historical trend for the same quarter, indicating potential bad news.

Harley Davidson was no doubt hurt as the COVID-19 pandemic slashed consumer spending, specifically on big ticket items. While profits showed steep YoY declines in the first half of 2020, a round of lay-offs in the third quarter saved the bottom-line, but a steady decrease in revenue continues to be the trend.

Align has a tendency to report Q4 on the last Tuesday or Wednesday of January, and has done so for the last eight years. This year however they have pushed that forward to February 3. ALGN has a DateBreaks Factor* of -3, meaning there is a high negative deviation from the historical trend for the same quarter, indicating potential bad news.

Align, the manufacturer of Invisalign orthodontic aligners, took a hit during COVID-19 related lockdowns in the first and second quarter of 2020 as their brick and mortar locations had to remain closed. While re-openings in Q3 helped push shipment sales, the one big obstacle ALGN is up against is competition from cheaper alternatives as consumers remain value-focused.

Biogen has also been reporting Q4 results in the last week of January since 2012, now pushing that out to Feb 3 in 2021.  BIIB has a DateBreaks Factor* of -3, meaning there is a high negative deviation from the historical trend for the same quarter, indicating potential bad news.

On Friday news broke regarding the FDA’s plans to extend its review of Biogen’s Alzheimer’s drug, aducanumab, by three months. This is generally a good sign that the FDA wants to approve the drug. If they do move ahead with approvals, however, it would be in spite of advice from an independent advisory panel that concluded in November that even the strongest available clinical trial data doesn’t support its effectiveness. The FDA is not required to follow the advice of its advisory committees, but they usually do.

Next week peak season rolls on with 1,307 companies reporting, including those with unusual earnings date patterns which we will be analyzing: Helmerich & Payne, Toyota Motor, Tenet Healthcare and Equity Residential. 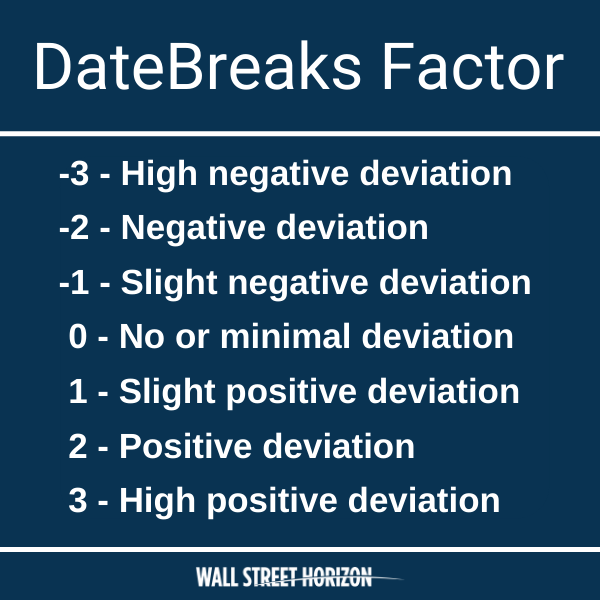 The DateBreaks Factor is a Wall Street Horizon proprietary measure, using a modified z-score protocol which looks at standard deviations from the norm and that captures the extent to which a confirmed earnings dates deviates or breaks from historical trend (last 5 years) for the same quarter.