There are many different ways in which the reporting of corporate events differs in North America vs. the rest of the world, whether it be due to business practices or requirements by governing bodies. With Q4 2021 earnings season behind us, we wanted to see how exactly the reporting season differs by region, and what implications there might be. The main differences we found were around reporting frequency, how far in advance a company confirms a report date, and where they release that information.

Theme 1: US companies report quarterly while the rest of the world mostly reports semi-annually

Anyone that follows global corporate earnings is aware of one glaring difference between the way US companies report earnings results as compared to the rest of the world. While the SEC requires US companies to file earnings results quarterly, a majority of international governing bodies only require semi-annual filings (2x a year). In fact, of the companies in the Wall Street Horizon universe (9,500 global equities) that report twice a year, only 14% are North American, the other 86% are international (non-US and Canadian companies). 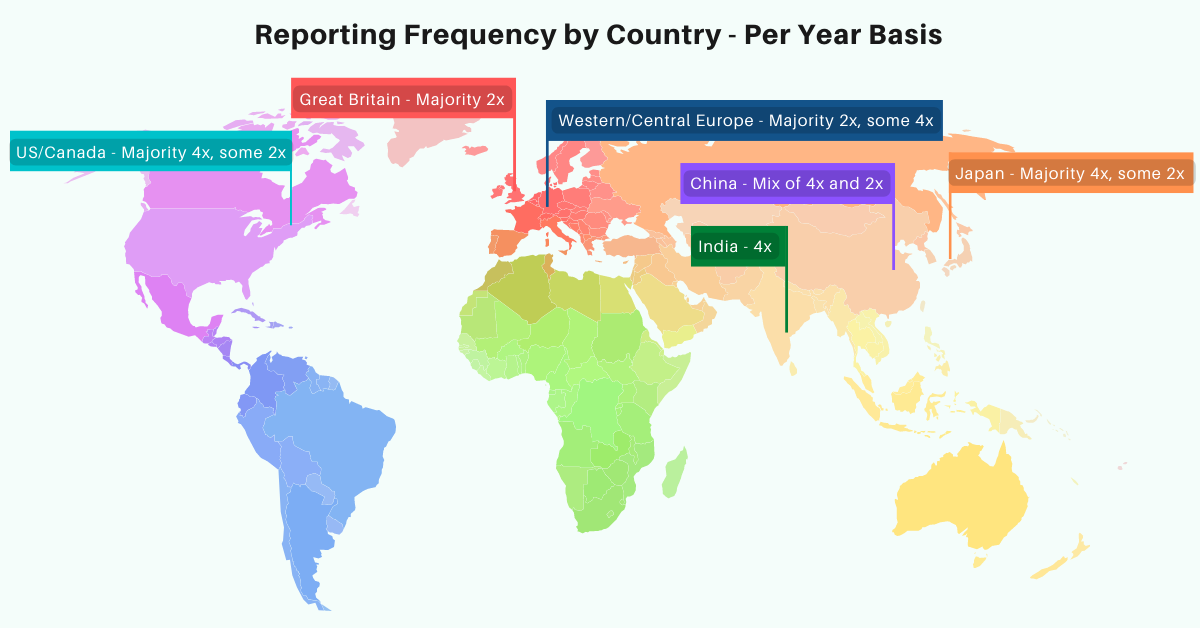 Why does this matter?
The pros and cons of reporting frequency have been hotly debated in the US for some time, with some pushing for less reporting and others saying more reporting is better for transparency.

Pros:
Proponents of the quarterly structure claim it forces companies to be more transparent. Investors in US companies have more data points to observe, as more frequency equals more history to study. And this, in turn, is a good thing for shareholders.

Cons:
On the other hand, opponents such as outspoken BlackRock CEO Larry Fink argue that quarterly reporting promotes short-termism, and a sort of frenzy around earnings season, when investing should be looked at with longer term goals in mind. Critics from corporate America (Bob Lutz, former Vice Chairman of General Motors) to politics (Hillary Clinton and former SEC Commissioner Daniel Gallagher), have argued for the same. Even former President Trump weighed in on the matter in 2018, asking the SEC to look into the quarterly practice and determine if it still made sense. He argued a switch to semi-annual reporting would allow companies “greater flexibility” and would save money.

UK Case study
To understand which of these options is best, it might help to look to a country that has done both. UK companies previously sided with the rest of Europe and reported semi-annually prior to 2007. Then from 2007 - 2014, UK companies were required to file quarterly, before moving back to semi-annual. Research from the CFA Institute showed that while the frequency of financial reporting had no material impact on levels of corporate investment, “mandatory quarterly reporting was associated with an increase in analyst coverage and an improvement in the accuracy of analyst earnings forecasts.” Most will agree those are two very good things for investors, but some still continue to argue that they may not outweigh the issues of short-termism and the behavior around it, i.e. “quarterly earnings hysteria” as Larry Fink titled it, and “quarterly capitalism” referred to by Hillary Clinton.

CEOs themselves point to short-term earnings pressure from investors as the number one factor promoting short-termism: 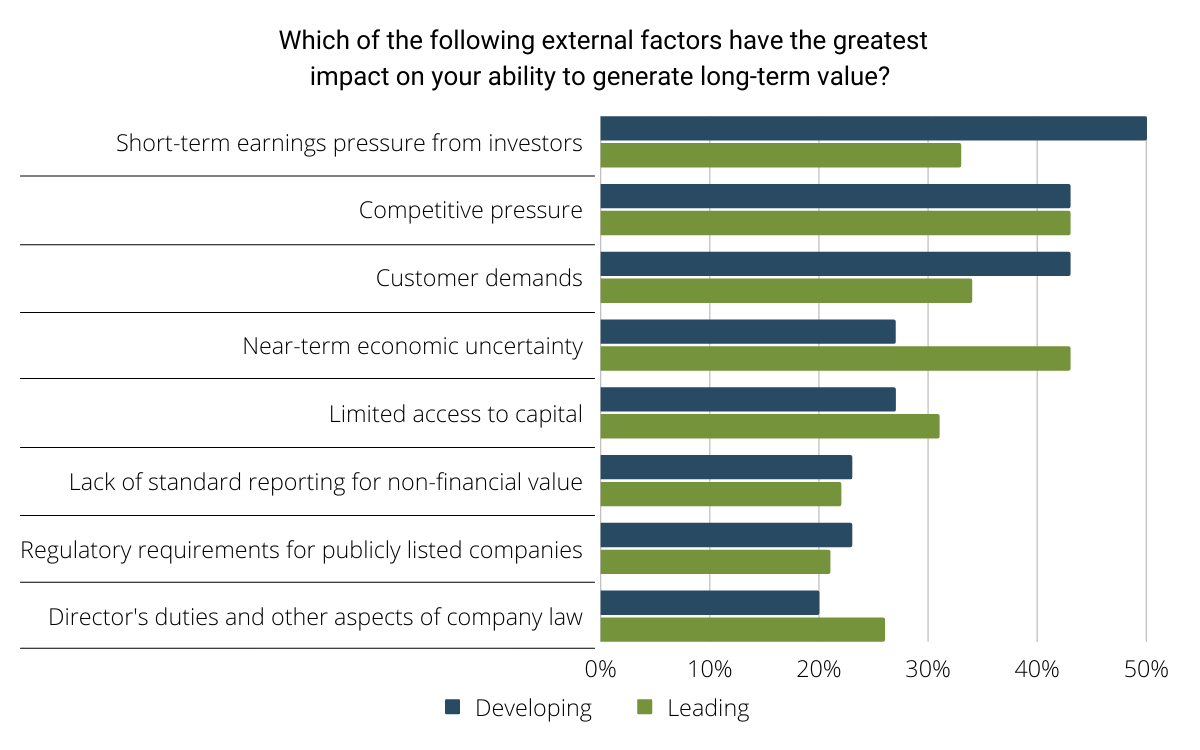 (Original data from this chart found on page 15 of this EY report: download pdf here: https://www.ey.com/en_ie/long-term-value/sustainable-corporate-governance)

The table below shows the average days prior to an earnings date that companies in certain countries confirm. You’ll notice on average US firms only give 19 days notice, only edged out by Canada and India which give less of a heads up. On the high end, German companies give the marketplace 73 days notice followed by Great Britain at 62. 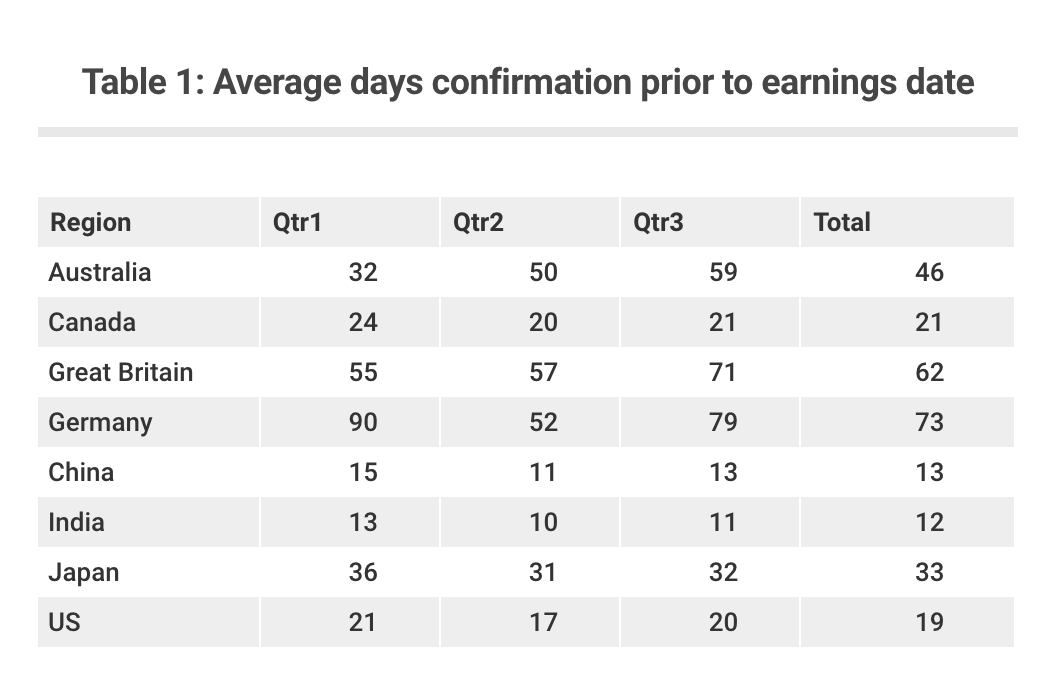 When providing an earnings date confirmation, US companies also tend to specify a time of day. That can include an exact time, or an indication of before market open (BMO), after market close (AMC) or during market hours. Worldwide companies are often just listed as “unspecified.” International companies that do mention market time include France (CET), Great Britain (GMT), and Brazil (BST).

And it’s not just earnings, we also noticed a pattern with dividends announcements. Like earnings announcements, a large majority of dividend announcements for US and Canadian companies come through press releases (91%). For the rest of the world, dividend reporting is variable (and harder to find) by country, but most information comes through websites (69%) and exchanges (18%).

Regardless of whether companies in the US or other countries are doing it “right” when it comes to how they report on corporate events, investors still need to be aware of these differences so they don’t miss anything.