Fourth quarter 2021 earnings season kicks off on Friday with results from JP Morgan, Citigroup and Wells Fargo. These reports are always watched with particular interest as they provide a wrap-up of the prior year as well as early expectations for the year ahead. Growth estimates for the quarter remain high, and continue to get revised (slightly) upward as we head into the season, but are nowhere near the decade level highs we saw in Q2 & Q3 2021.

The blended EPS growth rate for companies in the S&P 500 currently stands at 21.7% according to FactSet, up slightly from the 21.3% expected before Christmas. If this is the final number, it will mark the fourth straight quarter of EPS growth above 20%. Revenues are expected to come in at 12.9%, the fourth quarter of double digit sales growth.

While growth is decelerating, it’s also important to keep in mind that comparisons are relatively more normal than they were for the first two quarters of the year, which is why we saw growth rates of 90.9% and 52.5% in Q1 and Q2, respectively.

Rising Rates and Stronger Dollar will be in Focus

While much of the last year focused on issues such as supply chain disruptions, inflation and labor costs, companies will shift to some new(ish) themes when they address Q4 results. Topics such as the stronger dollar and rising rates, both which were emerging in Q3 commentary, will take center stage over the next several weeks.

Many analysts are now anticipating an aggressive tightening of U.S. monetary policy in 2022. Last week the Fed issued minutes from its latest meeting, indicating that the “very tight” U.S. labor market might require the central bank to raise rates sooner, taper asset purchases and also reduce its overall balance sheet to quell high inflation. As such, many banks have now moved up their timeline for rate hikes to begin in March, and happen quarterly. Expect to hear more about this from the big banks on Friday, as they look forward to recovering net interest income.  Other sectors, such as technology, are more likely to have negative commentary around rising rates.

While higher interest rates would be a boon for many sectors, the strengthening dollar is likely to be a concern for many multinationals. S&P 500 companies get close to 50% of their revenues from outside of the U.S., when the dollar strengthens, any income earned from foreign sales will decrease in value. Oftentimes, however, the stronger dollar is seen as a scapegoat for missed expectations, in the same vein as the “bad weather” excuse that many companies use every winter.

Looking at just US companies with a market cap greater than $250M, the delayer/advancer (D/A) ratio for Q4 earnings currently stands at 1.2, meaning slightly more companies are delaying earnings than advancing them, and in-line with the 10-year average of 1.1. This shows a return to normal after two very unprecedented years. After having an exceptional number of companies delay earnings in 2020, resulting in a D/A ratio of 4.0, those same corporations appeared to want to send positive body language in 2021 by moving their dates earlier than usual, resulting in a D/A ratio of 0.9. So far 2022 seems to be signaling a return to normal, as earnings growth rates level out as well.

The chart below shows the D/A ratio for each of the last 10 years, as well as outlier counts (delayers and advancers) for each period. 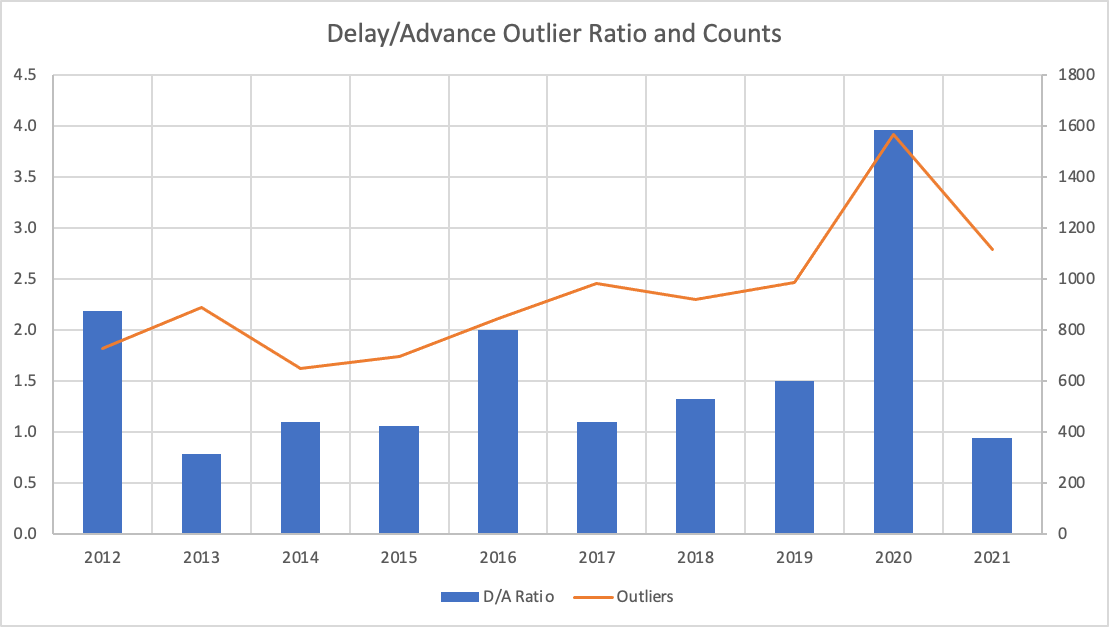 Banks Kick it Off Q4 Earnings on Friday

Financials continue to look good heading into bank reporting season. Strong points such as robust credit quality and a pick-up in loan growth will be somewhat offset by higher costs and lower fees. EPS growth for the sector is expected to come in nearly flat at -0.6%, with sales growth of 5.9%, according to FactSet.

However, with the expectation of rate hikes later this quarter driving bank stocks higher, investors will be keen to hear guidance for interest income and net interest margins in 2022.

This season peak weeks will fall between January 31 - February 25, with February 24 predicted to be the most active day with 820 companies anticipated to report. Again, only ~32% of companies have confirmed at this point (out of our universe of 9,500+ global names), so this is subject to change. The remaining dates are estimated based on historical reporting data. Keep in mind the Q4 reporting season is always a bit more prolonged, typically stretching over 4 peak weeks rather than the usual 3 peak weeks seen in Q1 - Q3. 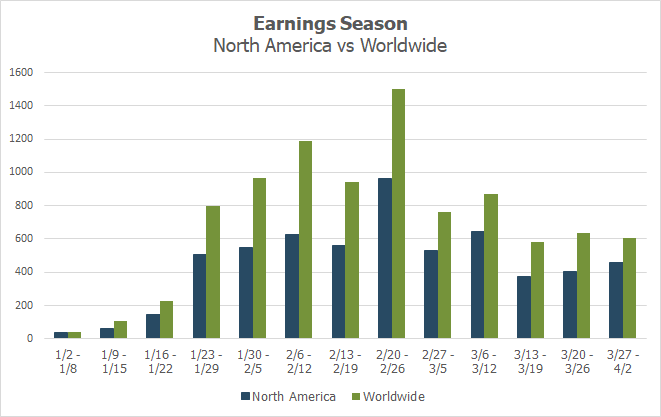