What a difference a year makes. In 2021, the S&P 500 reported stellar earnings growth of 47.7%, according to FactSet. Revenues, bolstered by strong household income and spending last year, climbed more than 16%. It’s a new year, and many new challenges have emerged. The S&P 500 is expected to report first-quarter earnings growth of 4.7% and revenue growth of 10.7%. The Q1 EPS forecast trend has been negative since late last year as risks mount: geopolitical events, higher interest rates, and surging labor costs are just a few of the major concerns in the C-Suite. The upshot is that consensus profit outlooks have been on the increase for the second half of 2022 despite talks of a recession getting tossed about in Wall Street research notes.

Energy – The blended EPS growth rate is forecast to be a whopping 245.4%. Exxon Mobil (XOM) and Chevron (CVX) are two dominant firms, together representing more than 36% of the sector. With oil prices having surged from the $50s to above $100 per barrel year-over-year, it’s no surprise that Energy earnings are set to soar.

Industrials – Bottom-up earnings are expected to have grown 31.9% from a year earlier for the Industrials sector. Recall that Q1 of last year featured still prevalent social and economic restrictions due to the pandemic. This time around, firms were all open for business and consumers were traveling, boosting this cyclical sector’s fundamentals.

Materials – Blended EPS growth is expected to be 30.5% for Materials companies. Like with Energy shares, soaring commodity prices were a major tailwind for firms like Freeport McMoRan (FCX) and Newmont Mining (NEM).

Consumer Discretionary – The blended EPS drop among CD companies is 14.9%. This large profit decline is somewhat deceiving as it is driven by Amazon (AMZN) and Ford (F). Online retail was a tougher business while cars were hard to come by last quarter. Back out those two stocks, and the sector’s growth rate is +2.9%.

Financials – As we will detail later, EPS growth* is worst for the Financials sector. The upshot is that its P/E ratio has fallen to just 14.4, well below the S&P 500’s forward P/E of 19.5.

As always, the banks kick off the reporting season. Financials will be particularly important to watch this go-around amid the sharp rise in interest rates over the last several months—particularly on the short-end of the Treasury curve. Consider that as recently as December, short-term rates were barely above 0% and the U.S. 10-year Treasury rate was under 1.50%. Fast-forward to today, and the 2s-10s spread inverted (albeit briefly) with the 2-year yield surging from about 20 basis points in Q3 last year to above 2.50% by the end of this year’s first quarter. Moreover, credit spreads widened considerably to begin 2022: The yield premium on U.S. investment grade credit surged from under 100 basis points last November to 150 basis points in mid-March. Spreads on junk bonds swelled to more than 4% as rates rose.

Another trend to watch is how firms with more foreign exposure perform versus domestic-centric companies. According to Bank of America Global Research using FactSet’s estimates, earnings are expected to be better among global firms. Within investment grade issuers, those with a foreign sales mix of more than 50% are expected to report EPS gains of 6.9% versus just 2% for companies with international sales of 25% to 50%.

While large financial firms get a chunk of sales from foreign markets, the banking industry is expected to show significant losses. FactSet notes that the Financials sector is forecast to report the largest year-over-year earnings decline among all 11 sectors at –24.2%. The bar is set low for banks: The industry group’s consensus net loss is a whopping 34% while Consumer Finance is expected to show an earnings drop of 26%, per FactSet. The Capital Markets industry is the “least bad” within the sector as it features a consensus EPS estimate change of –17%.

JPMorgan Chase (JPM) gets things started on Wednesday. The diversified bank has a confirmed earnings date of April 13 BMO with a conference call that morning. JPM’s CEO Jamie Dimon has been outspoken recently regarding enhanced global market risks, particularly regarding the Russian invasion of Ukraine. Harsh economic sanctions could hurt the largest U.S. bank’s profitability due to material exposure to Russia debt to the tune of $1 billion. Traders should pay close attention to loan losses and possible write-downs in JPM’s report. Dimon’s commentary on the conference call will be equally important to weigh. At a macro level, Dimon has voiced downright bearish predictions for the domestic economy. In his annual letter to shareholders, JPM’s Chief Executive sounded off on higher interest rates, rising inflation, and errors by policymakers regarding the size of last year’s stimulus measures. Still, the CEO was upbeat about the strength and resilience of the American consumer who remains flush with excess savings.

Shares of JPM have stumbled in 2022 despite a rising interest rate environment. To be fair, banks profit more when the yield curve is steep, but a flat to inverted curve does no favors to banks who generally borrow short and lend long. The stock peaked near $173 in the fourth quarter of 2021 but then dropped to under $130 at the March low. Ahead of earnings, shares are testing that same level. Perhaps expectations are low this go-around considering a more than 25% drawdown off the 2021 peak. It was the opposite situation in January ahead of 4Q21 earnings when JPM was near all-time highs. Despite beating on earnings, the stock fell sharply over the ensuing days last quarter. 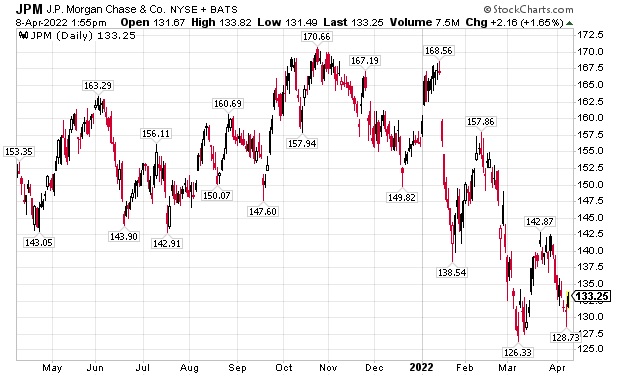 Analysts expect JPM to report $2.71 per share of profits, but that figure would be down severely from Q1 of last year when the bank posted a stellar $4.50 per share earnings figure. These data are from The Wall Street Journal using FactSet data.

A final earnings trend to watch as we preview what will surely be a compelling reporting period: stock price reactions. According to FactSet data and BofA, companies that beat on the top and bottom lines saw their stock prices react just mildly positively last quarter. The average relative one-day post-earnings performance was just 43 basis points versus a +150 basis-point historical average. In this more volatile and uncertain market, fraught with recessionary warning signs, traders should closely monitor how stocks react to earnings this quarter. What’s more, options trading might be a wild ride as the VIX hangs out above 20.

In all, 163 North American companies are slated to report this week and 227 worldwide. The April 24 through May 14 period will be the heart of the earnings season. 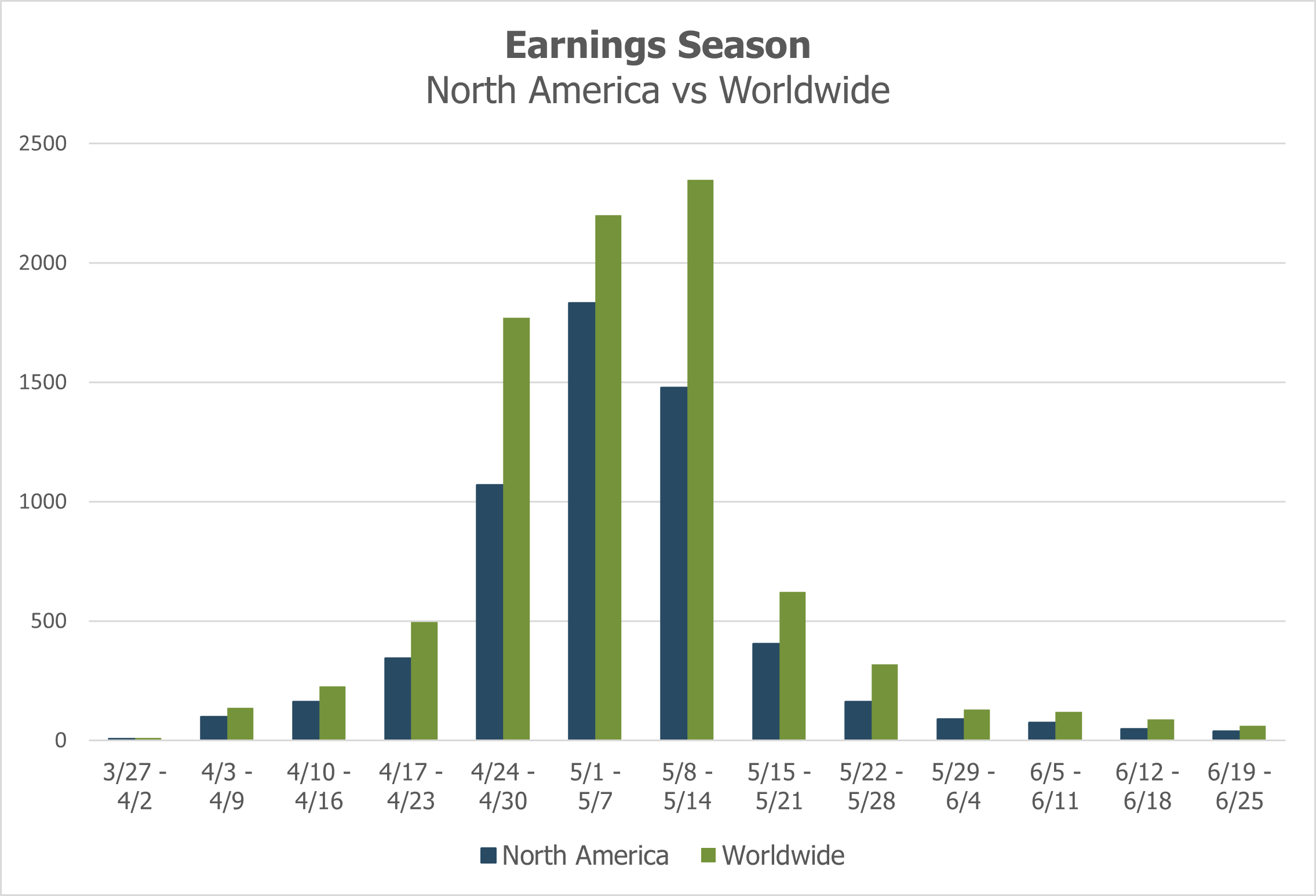 2022 has already proven to be a different animal than 2021. Investor sentiment is, on average, the worst it has been in decades while consumer sentiment is the most glum since 2011 by some measures. The banks start things off this week, and expectations are likely much softer than was seen in January. With so many risks running rampant around the world, traders must pay close attention to not only this earnings season but also any other corporate body language cues for hints at what lies ahead. Wall Street Horizon’s industry-leading earnings data and corporate events coverage keep traders in the know so they can stay a step ahead.