You might be surprised to know that earnings season is off to a superb start considering how volatile markets have been over the last two weeks. So far 88% of S&P 500 companies have surpassed Wall Street expectations for earnings, vs. the 5-year average of 75%, according to Factset. Even so, investors have been a bit distracted this season, trading on everything from increased COVID concerns around the Delta variant, inflation concerns, and jobless claims, but not necessarily rewarding companies for their excellent prints. After a major sell-off last Monday, things started to turn around by Tuesday. Investors started to rally around companies that posted big positive surprises for Q2, including some of the restaurant names (Domino’s, Starbucks, Chipotle), suggesting they had shrugged off COVID concerns.

Peak season officially starts this week, and we believe the momentum from last week will continue as big names report and likely beat expectations. However, cautionary language on earnings calls around inflation and the potential for tightening COVID restrictions is expected to pick up as those issues remain top of mind for many investors. FactSet now expects YoY S&P 500 EPS growth to come in at 74.3%, still the highest rate since Q4 2009 (109.1%).

As of Friday, 59% of companies have confirmed their earnings dates for Q2, out of our universe of 9,000+. So far only 8% of those names have reported.

The concentration this week will once again be in big tech and industrials, with large energy companies and health care also making their debut. 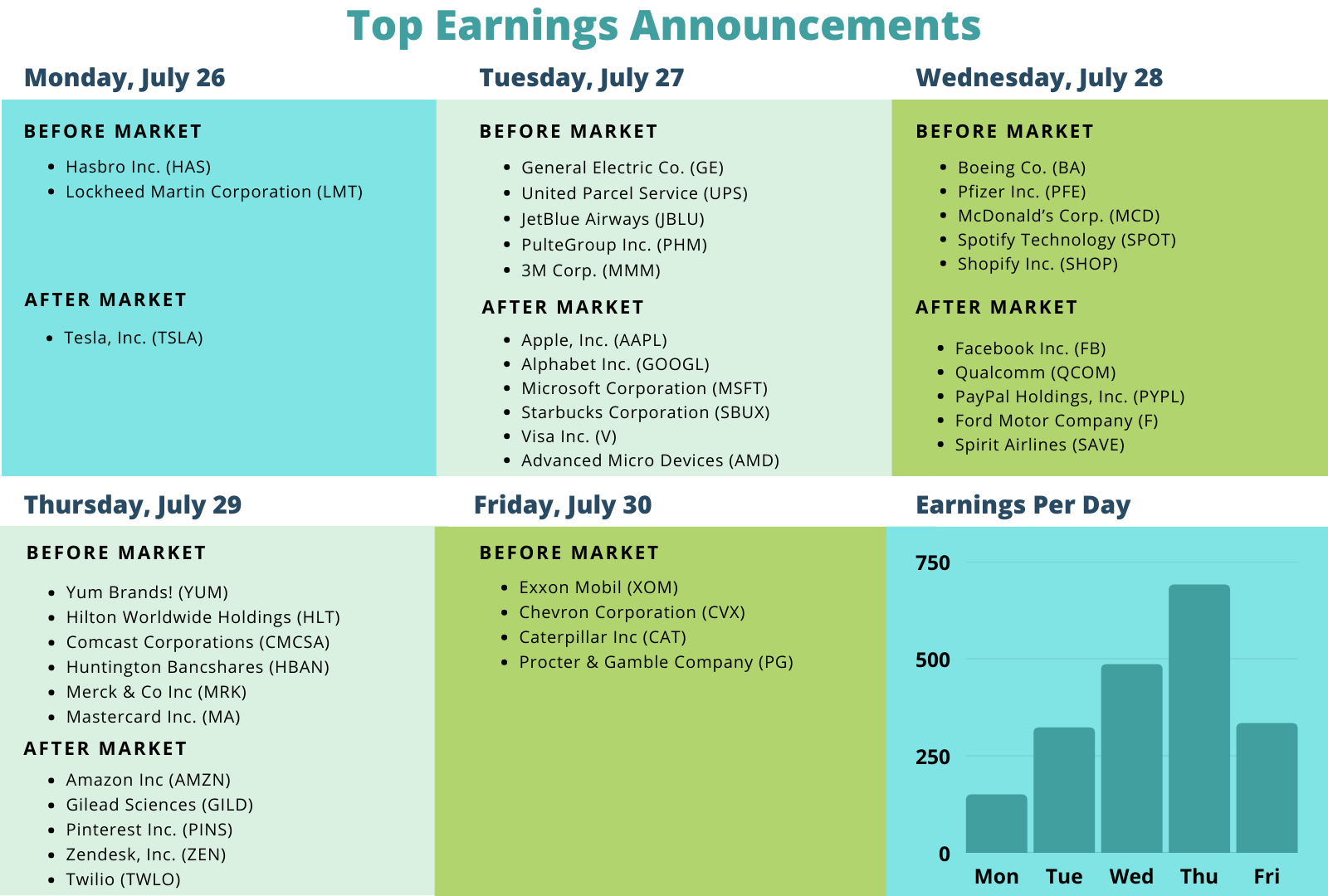 We’ve got two outliers on our radar this week, one that pushed their earnings date out and the other scheduled earlier than usual.

It’s not often we bring up the happenings of the very biggest stocks in the world—but we do so this week. Microsoft Corp., the second-largest market cap company at $2.13 trillion, lit up our radar concerning its upcoming earnings date. Recent corporate activity could be the cause.

Mega Cap US Growth’s Dominance Re-emerges
Taking a step back, what a run it has been for the biggest of big stocks. While Q4 2020 and Q1 2021 saw small caps, cyclicals, and value plays surge, the last two months have been a return to growth stocks’ dominance. The FAAMG names are leading the market. MSFT has rallied nearly 20% just in the last two months. Can that continue? Could earnings season cause a hiccup? The upcoming earnings report might provide the answer.

Outlier Analysis
The Washington-based software firm in the Information Technology sector completed its fiscal year on June 30. “Mr. Softy”, as Wall Street dubs it, has historically posted Q4 results between July 16 and July 20. On April 28, Wall Street Horizon set an inferred date of July 21 per the trend.

MSFT often pre-announces two weeks before its earnings date, so we had clues that they were reporting late. Indeed on July 13, the company announced it would post results on the afternoon of July 27—a week later than first estimated. The result is a high Z-score of 3.97 indicating a later than normal announcement. Portfolio managers should bear in mind that Microsoft is acquiring Nuance Communications which could have an impact on the late announcement.

Acquisition Details—Broader Implications?
The Nuance deal, a nearly $20 billion all-cash transaction announced on April 12, bolsters Microsoft’s healthcare cloud business and other activities. It’s another step in the direction of AI. Investors should be on the lookout for more major corporate deal-making as earnings season rolls on.

Companies are flushed with cash following the central bank, fiscal, and consumer response to the pandemic. Putting some of that money to use via mergers and acquisitions is a logical step at this point in the economic cycle now that balance sheets are shored up. Firms will want to take caution considering lofty market valuations, though.

Outdoor Sales Helping to Offset Ammo Shortage
Vista Outdoor is a manufacturer of outdoor sports and recreation equipment. Back in 2019 Vista made the decision to shed its Savage Arms and Stevens firearms brands in order to focus on categories where they thought they could be market leaders. However, they still manufacture and sell one of the leading ammunition brands, Federal Premium Ammunition. Record-breaking gun sales has led to a shortage of ammo in the industry, and supply chain issues have exacerbated that further. But Vista also owns other leading brands in the outdoor activity segment including Camelbak, Camp Chef outdoor cooking equipment, Copilot bike carriers and trailers for children and others, all of which have performed incredibly well as consumers are spending more time outdoors.

Outlier Analysis
Vista historically has reported their Q2 results between August 6 - 11, and always on a Thursday. As such, we set a report date of Thursday, August 5. On July 8 the company issued a press release stating that FQ1 results would be released on July 29 BMO, with the conference call at 9:00AM eastern time. This change resulted in a high Z-score of -5.11. A high negative Z-score (we consider anything higher than 3 or lower than -3 to be significant) reflects an earlier than usual confirmed earnings date, which in this case could signal that Vista Outdoor is getting ready to surprise to the upside.

Next week marks the busiest week of the earnings season with 2,700 companies set to report, with a variety of names reporting from the enterprise tech, consumer discretionary, energy and health care spaces.