The good times rolled again last week. As companies continued to beat estimates for Q3 earnings, the blended growth rate from FactSet was updated to 32.7%, the 3rd highest result in over a decade. Investors also seemed to like the news, bringing the S&P 500 index to a record close on Thursday of 4,549.51.

Companies that Get Caught Missing Earnings Estimates Pay the Price

We took a look at the 3-day pre-earnings drift and the 3-day post-earnings drift for S&P 500 names that have reported for Q3 thus far and are at least 3 market closes out from their report. We’re finding that companies that miss earnings are being punished more than usual and for a longer period, with decreases still lasting into the third day of the post-earnings drift. Meanwhile, companies that beat, especially those that beat by 5% or more, are seeing stock prices rise well into day 3 of the drift. What about those names that report in-line, or just slightly better than expected? Up until Thursday that wasn’t good enough for investors this season, they were taking those names down an average of -0.04%. With Halliburton’s in-line report on Tuesday, and 3-day drift of 2%, the average flipped to reveal those stocks were being slightly rewarded to the tune of 0.52%.

This season’s leaders and laggards remain unchanged from last week.

While Energy continues to hold the top spot, results were mixed last week with Valero beating expectations, Halliburton and Schlumberger reporting in-line and Kinder Morgan missing. This week all eyes will be on energy giants, Exxon and Chevron.

Materials had a better turnout last week, with big names such as Steel Dynamics, PPG Industries, Freeport-McMoran, Nucor, Olin, Cleveland-Cliffs all handily surpassing estimates. This week the focus will be on Sherwin-Williams, Barrick-Gold, U.S. Silica Holdings and LyondellBasell.

Industrials held the third spot, with beats from all of the airlines (UAL, AAL, LUV, ALK), as well as CSX and Honeywell. More airlines to come this week with JetBlue and Spirit, as well as Boeing, UPS and bellwethers of global growth such as Caterpillar and 3M.

Consumer Discretionary added two percentage points of EPS growth since the beginning of the month. Helping support that growth last week were beats from cult favorite names such as Netflix, Tesla and Chipotle Mexican Grill. Those results helped to offset a big miss from Las Vegas Sands, which came in 24 cents lower than analysts were expecting. This week we’ll see results from the auto manufacturers (GM, F), fast-food restaurants (MCD, YUM, SBUX) and Amazon.

Consumer Staples saw less of a boost last week, up just 0.4 percentage points from the prior week. Procter & Gamble and Philip Morris were able to eke out slight beats, while Boston Beer Company cratered to the downside as the popularity of hard seltzer fizzled out over the summer. This week will bring results from Coca-Cola, Colgate-Palmolive, Molson Coors Brewing and more.

Utilities growth turned positive last week with upward revisions and better-than-expected results from NextEra Energy, the only S&P 500 utility company to report at this point. This week will see more reports out of that sector from DTE Energy, American Electric Power, FirstEnergy and more.

As always we’re keeping a close look at earnings date outliers, companies that are reporting earnings on a date outside of their historical range, which could provide a clue as to what the upcoming report and call will reveal. Facebook and PulteGroup have both confirmed off-trend earnings dates, with different implications.

Facebook tends to report the last Wednesday or Thursday of October and has done so for the last three years. Prior to that they reported the first week of November for three years. This is also the first time they will report on a Monday since they IPO’d in 2012. Academic research would suggest that FB is preparing to share good news.

Despite controversies and tightening regulations, increased usage of platforms such as WhatsApp, Instagram and Messenger are expected to have driven profit growth in the third quarter.

PulteGroup is giving a signal opposite to Facebook’s. The homebuilder has pushed their earnings release back five days. PHM has reported Q3 earnings from October 20 - 24 for the last 7 years, typically on a Tuesday. Because of the Tuesday pattern, it could be that earnings were just held because of where the third Tuesday in October falls this year.

With that said, homebuilders have no doubt had their headwinds. Despite strong demand for homes, increased costs for building materials such as lumber and steel, as well as inflated pricing for everything else needed to construct a home, has been difficult to absorb. Peers in the space have had mixed results this season, with Lennar beating on the bottom-line but missing on the top-line, and Toll Brothers surpassing both estimates, but only beating revenue expectations by 0.4%.

This season peak weeks will fall between October 25 - November 12, with November 3 predicted to be the most active day with 1,077 companies anticipated to report. 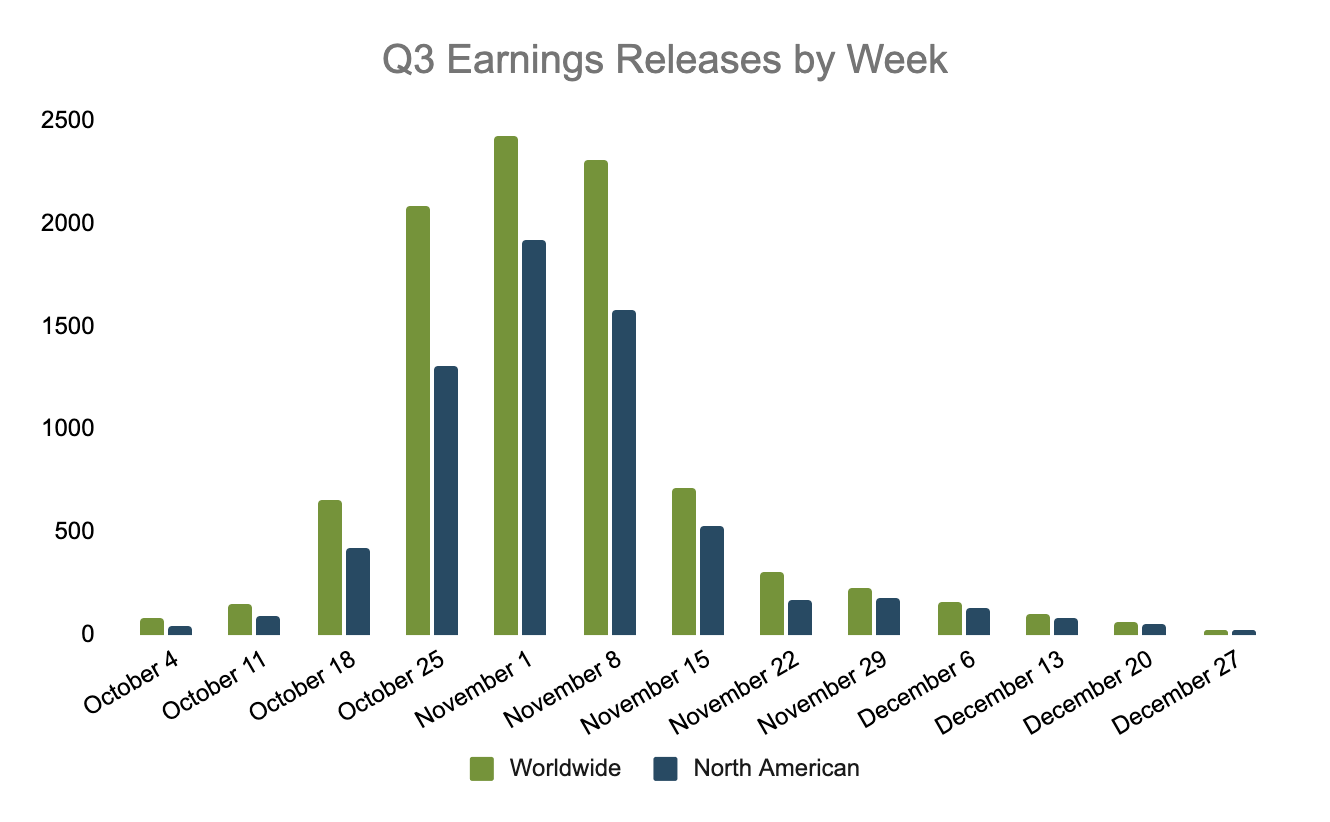 This week peak earnings season officially begins with 2,089 companies from our universe of 9,300 reporting.