Earnings Season off to a Shaky Start, Eyes on the Consumer and Musk

It was a rough beginning to Q1 reporting season after shares of JP Morgan (JPM) fell more than 3% last Wednesday following its earnings report which was not exactly the beacon of hope the market was looking for from the largest U.S. bank. The underwhelming filing was highlighted by a $902 million build in credit reserves. Banks often build loan loss reserves when they are concerned about profitability and credit issues over the ensuing quarters. JPM’s lowered Tier 1 capital figure was also a caution flag even with Jamie Dimon’s “fortress balance sheet,” as Wall Street likes to dub it. Still, the $374 billion market cap Financials firm is just one of a handful of important names that have reported, and many are still yet to report.

Among the most important topics this earnings period will be the state of the American consumer. Sentiment, measured by the University of Michigan, is at decade-lows as inflation runs at 40-year highs. Contrasting sour sentiment is booming spending. Retail sales, while slowing from a torrid pace in early 2021, remains robust.

Bookending this week with quarterly results, we’ll get a sense of what is happening on the ground from two companies with credit card spending data: Bank of America (BAC) on Monday and American Express (AXP) on Friday. 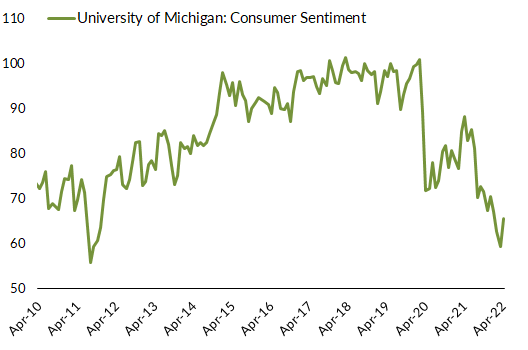 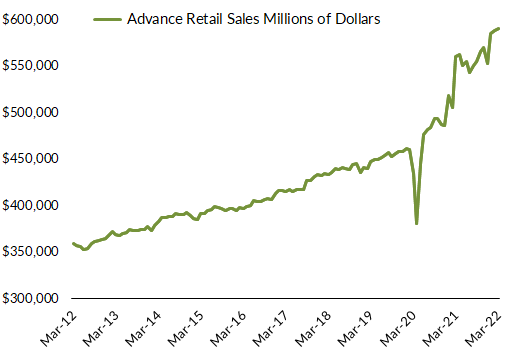 Musk Shakes Things Up at Twitter Ahead of Tesla’s Results

Tesla (TSLA) is the standout reporter this week. The world’s fifth-largest stock by market cap is Confirmed to release its earnings on Wednesday AMC with a conference call to begin at 5:30 pm ET. The appropriately dated “4-20” report is interesting not just from a play-on-words perspective, but also because it’s the earliest the sexy mega-cap growth stock has issued a Q1 earnings report in its history.

This comes after CEO Elon Musk offered to purchase all outstanding shares of Twitter (TWTR) for a once again fittingly $54.20 (see what he did there?) Thursday last week. Tesla’s Q1 earnings report date is a big outlier for how unusually early in the season it posts. The earnings date has a Z-score* of –2.36. The EV company also confirmed its reporting date much earlier than its historical average, resulting in an earnings date confirmation Z-score** of –2.8. For traders, that could imply positive news to be released on Wednesday evening.

*Earnings Date Z-score - statistical measurement of how an earnings date (confirmed or revised) compares to the reporting company's 5-year trend for the same quarter.

Tesla also made headlines in late Q1 when the company announced plans to split its stock for the second time in two years. Looking ahead, investors can expect another round of interim sales data to cross the wires in early July ahead of Q2 earnings. Wall Street Horizon set an Unconfirmed interim July 4, 2022, date for Q2 production results. Shares have performed relatively well this year considering the overall weakness among Nasdaq 100 equities. 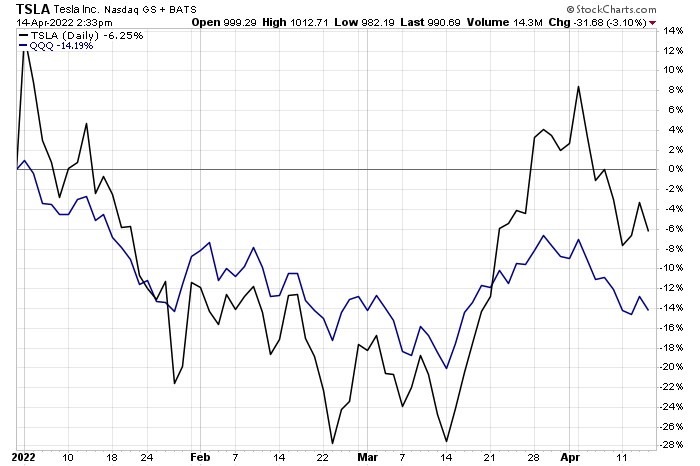 Other big names scheduled to report this week come from a variety of sectors.

Bank of America has a Confirmed earnings date of Monday, April 18 BMO with an 8:30 AM conference call to follow. Expect to hear notes about not only the lending and capital markets businesses, but also what is happening at the consumer level. BofA closely tracks credit and debit card transaction trends. Amid high inflation, pinching consumers’ purse strings, and negative real wages, any tidbits from CEO Brian Moynihan could be telling about future retail sales figures.

On Tuesday, a slew of major companies report. In the pre-market, Johnson & Johnson (JNJ) from the Healthcare sector, Lockheed Martin (LMT) within Industrials, and the insurance firm Travelers (TRV) report. After the closing bell, IBM (IBM) and Netflix (NFLX) post results.

Amex will be an important stock to watch on Friday as it reports before the market opens. This will be another reading on the health of consumers in Q1. 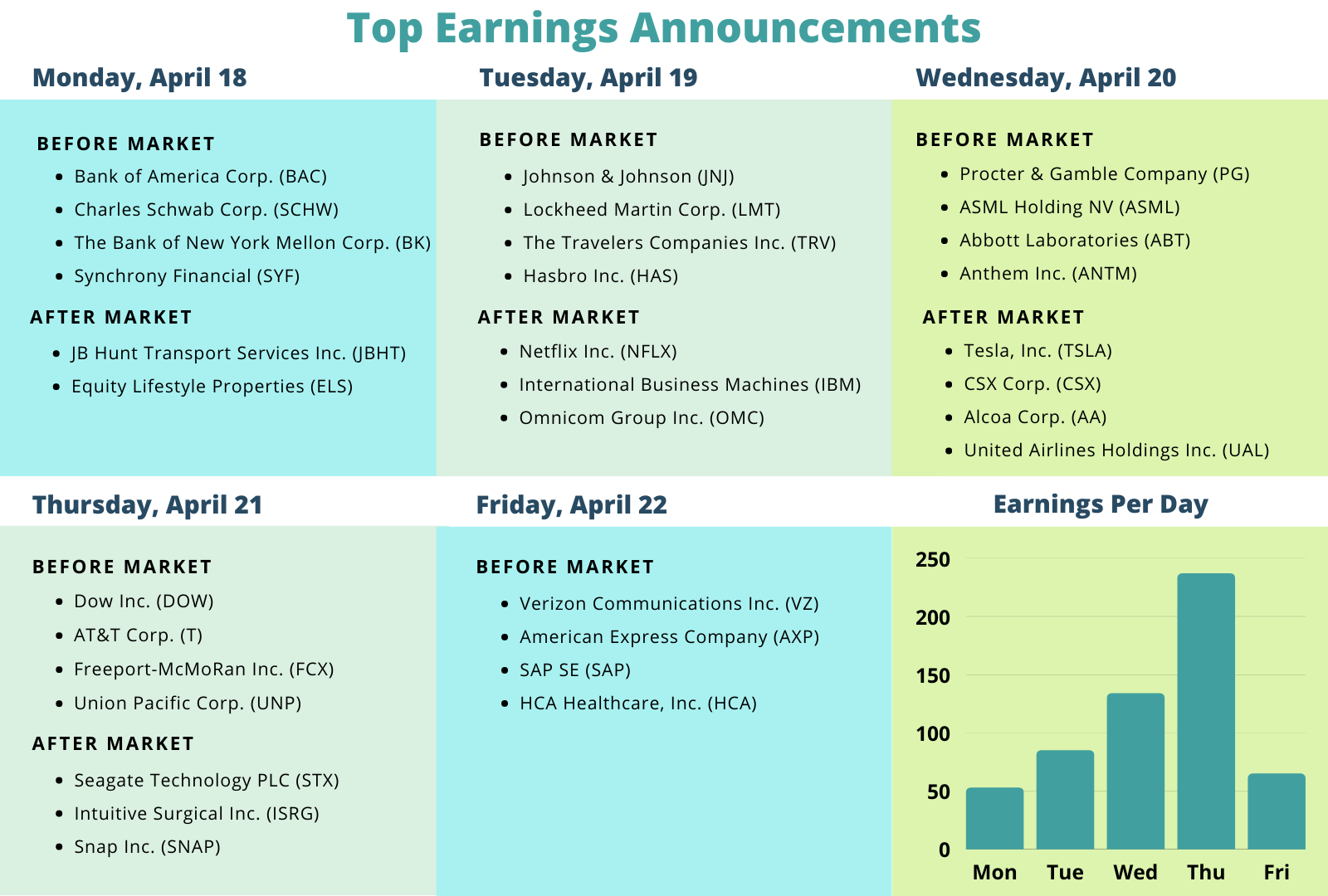 This week we see earnings start to pick up before the peak of the Q1 reporting season begins on April 24th. The week of May 1st is slated to be the most active week with over 4,000 companies expected to report. At this point 46% of companies have confirmed their earnings date (out of our universe of 9,500+ global names). 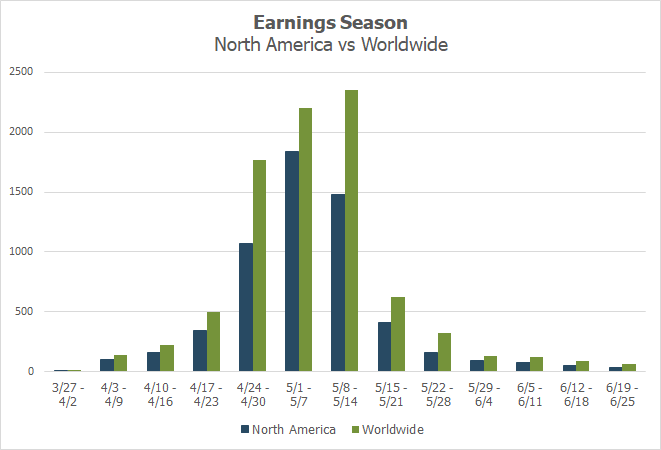 Earnings crank up this week, perhaps a good thing considering all the macro and geopolitical risks that have been gripping headlines in recent weeks. Shifting the focus back to corporate profitability might just be what the market needs. It’s not all roses, however. Surging producer prices, higher wages, and lingering supply chain issues are top of mind in the C-suites of both domestic and multinational firms. In addition to top- and bottom-line results, margins will be closely tracked as big-name companies report this week and through the season.