Better-than-expected earnings were finally enough to flip markets into the green on Friday after a week that saw a lot of red. After kicking off with mixed results from banks and industrials, big tech names helped the Q4 season turn a corner. IBM, Microsoft and Apple all delivered stellar results last week, surpassing expectations on the top and bottom-line, while Intel only beat revenue estimates due to increased spending on new facilities and products which ate into profits. IBM and Microsoft benefited from increased adoption of the cloud, Intel (despite missing and then trading downward after the report) reported continued strong demand for chips, but even after those stellar results the broad based sell off continued. It was Apple that helped reverse that pattern after the bell on Thursday when they reported their highest quarterly revenue figure ever, and gave investors hope that supply chain issues were improving.

A recent lineup of Q1 events for Apple gave us clues to expect strong results from the tech giant, and positive commentary from management (see: Apple’s packed Q1 calendar could be signaling good news ahead). Next up on Apple’s calendar: Dividend  announcement on Feb 7, Shareholder Meeting on March 4, Spring product event to be announced sometime soon for March/April.

Robust results from last week drove the blended growth rate for S&P 500 EPS to move up to 24.3%.* Revenue growth increased to 13.9%.* Despite the good news, a majority of companies are still mentioning higher costs as an impediment to growth, and S&P 500 expected growth for Q1 and Q2 remains in the single digits.

The number of companies reporting better QoQ EPS results is falling, showing that outsized growth due to easy comparisons for certain quarters of 2020 and 2021 is subsiding.

On average over the last 4 years, 55% of globally publicly traded companies* have seen their EPS increase QoQ. Increases in EPS typically outnumber decreases in any given quarter. The few exceptions in which this trend reversed was in Q1 and Q2 of 2019, and of course in Q2 2020 in the midst of COVID lockdowns when 65% of companies reported a decrease in EPS from the prior quarter.

For Q1 (companies reporting Q4 2021 results), that breakdown has normalized, with 49% of companies showing a decrease in EPS from the prior quarter, and 51% showing an increase.

*Based on our universe of 9,500 publicly traded equities 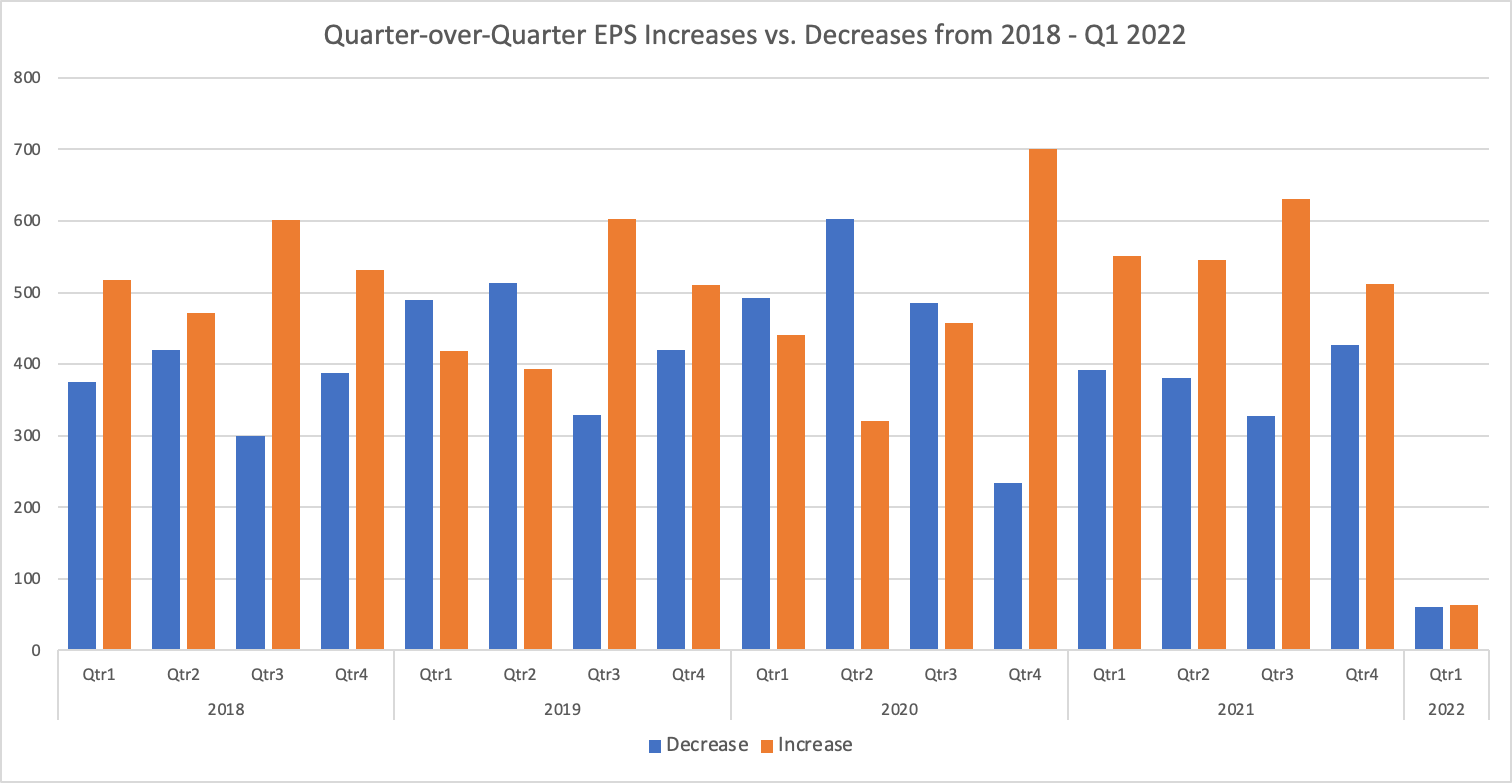 Looking at just US companies with a market cap greater than $250M, the delayer/advancer (D/A) ratio for Q4 earnings improved slightly from last week to 0.7, meaning more companies are advancing earnings than delaying them. This is below the 10-year average of 1.1, and a good sign of what could be shared on upcoming earnings releases. This is also the highest number of advancers vs. delayers that we’ve seen in 10 years of history.

The chart below shows the D/A ratio for each of the last 10 years as well as for Q1 2022, and outlier counts (delayers and advancers) for each period. 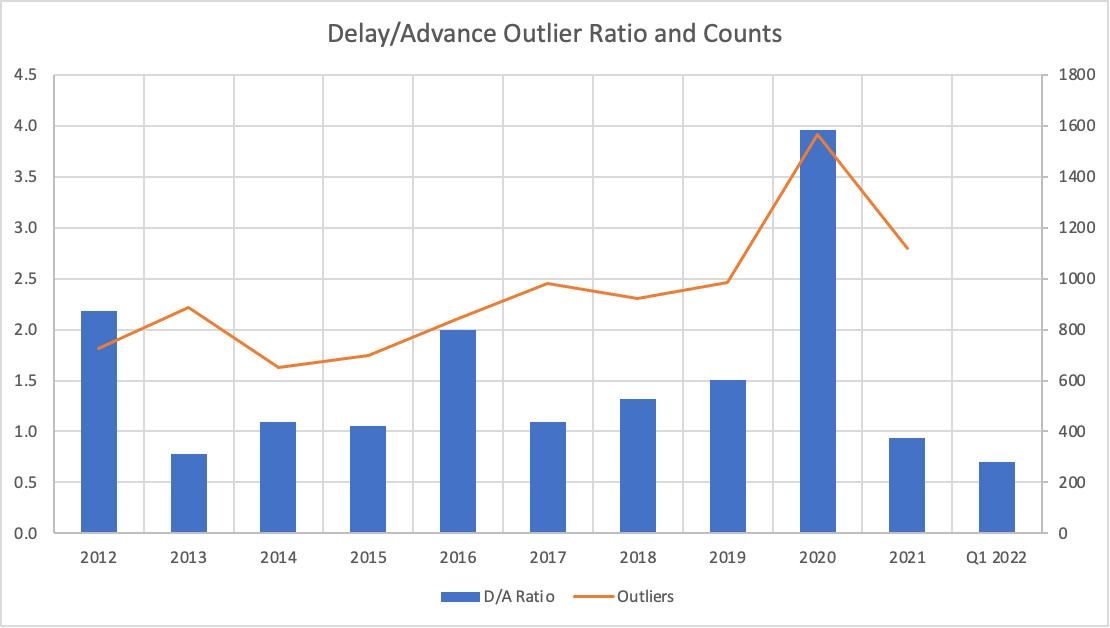 Big tech reports continue this week with all eyes on Alphabet, Meta Platforms and Amazon. We also start to hear from Energy names such as Exxon Mobil and Conoco Phillips, Health Care names such as Merk, Eli Lilly and Biogen, and gaming companies Electronic Arts and Activision Blizzard. 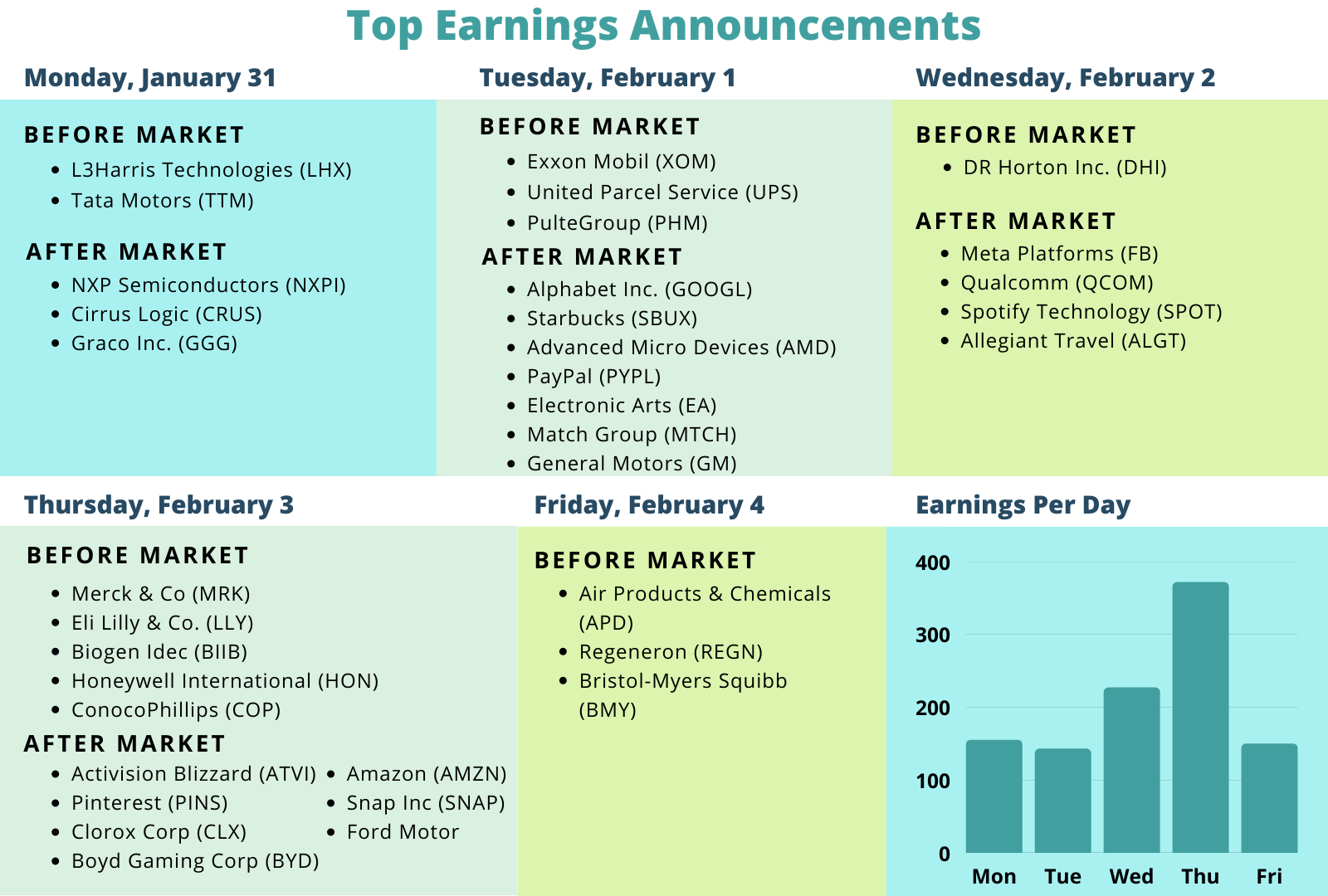 For the last 15 years, Boyd Gaming has reported Q4 earnings results from February 16 - March 4, typically on a Tuesday or Thursday. On January 3 the company confirmed they would report on February 3, nearly two weeks earlier than we had anticipated, suggesting they have good news to share on the upcoming call.

Last year was a stellar one for BYD, one of the largest casino entertainment companies in the US, boasting 28 gaming properties across 10 states. After putting up negative EPS growth in every quarter of 2020, the company had an impressive rebound that included profit growth of 4750% in Q1, triple digit growth in Q2 and Q3, and the expectation that will continue in Q4.

Peak season officially begins this week and will continue through Feb 25, with February 24 predicted to be the most active day with 747 companies anticipated to report. At this point 52% of companies have confirmed (out of our universe of 9,500+ global names). 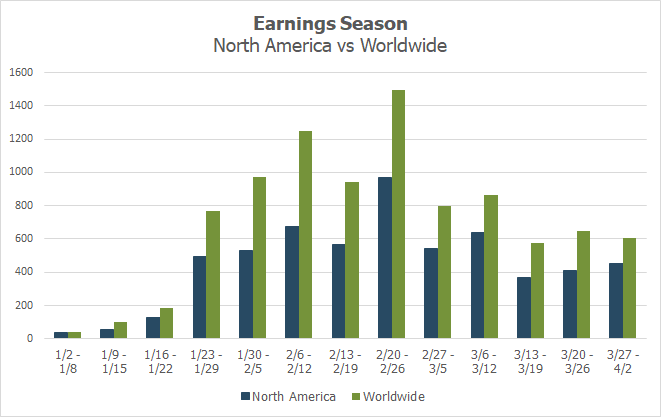